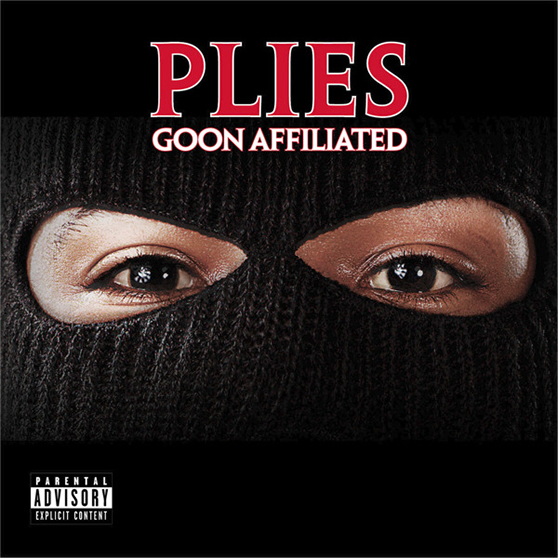 What can you say about Plies that hasn’t been said? The man is releasing his fourth album in three years. He has two gold albums and another one that went almost gold. Plies has been involved in controversy most of his career, whether it being the lyrics, his chains, or his criminal background (or lack thereof.) I’m not here to question the validity of his words, but to critique the music he’s making. I make no bones about me being a Plies fan, but I believe I can give an unbiased review. Let’s check out your boy Plies on his latest…Goon Affiliated.

Go Live
Plies starts these albums out with his typical sound which for the people that don’t listen to Plies, hard beats and hood rhymes. I can’t hate on Plies for this one, he sticks to what works for him and this will be another song that you will hear in the hood.

Rob Myself
I have always said that Plies might be the best goon out there rapping. This song is another reason why I think so. How are you going to make a song about robbing yourself? GENIUS! The beat on this one doesn’t disappoint, and I can see this being a saying for the summer.

Awesome
This is one of those fun songs that will get a chuckle out of you. “I’m on my New York shit; I think I’m hot son”. If you don’t like Mr. Pliers, you probably won’t like this song. This is Plies being Plies. This song reminds me of something that Gucci would do, but Plies is a better rapper, so it was executed better.

Bruh Bruh
Produced By Zaytoven
Okay, since I have been listening to this album, I have been incorporating this in my vernacular. Plies has done it again and introduced another word into the hood slang. First he popularized  “goon”, then “Bust It Baby”, and now we have “bruh bruh”. Don’t be surprised if you find yourself saying this soon.

Get My Niggas Out
I knew it wasn’t going to be long before Plies did one for the niggas locked up behind bars. Say what you want about Plies, but he shows love to the niggas locked up. Peep the flow on this one, Plies speeds it up for you guys. Who said Plies can’t switch it up? Not me.

Flaw
Plies is going to have to put out a dictionary after this album. I don’t know if this is all part of the lingo in Ft. Myers, but he sure is putting the world onto some gems here. I know a bunch of flaw ass niggas in the world. Bout time Plies called these niggas out.

Becky
Produced by J.R. Rotem
This is the single that I really didn’t like when I first heard it. But after seeing the reaction when this comes on in the club…I started liking it. For those of you that don’t know Becky = Getting Head. Like I said earlier, Plies is going to have to include a GOONtionary with his next album.

Kitty Kitty
Featuring Trey Songz; Produced by Fisha & Price
Plies and Trey look to create the magic that they had on his last one that birthed the infamous line “went to sleep real…woke up REALER!”. I have to say that this one will definitely have the ladies going nuts. Trey can’t lose right now; anything he does now seems like a hit.

Whatever I Say
Plies takes it back to the hood with this one and I have to say that the goon Plies is more appealing to the fellas than that other guy that makes the ladies go crazy. This one isn’t the gooniest…but it will suffice.

Goonette
Plies did this one for the girls that are like him…GOONS. How many baby mamas will have this as a ringtone? The numbers will be astounding. For some reason, I really don’t like this song, maybe because I don’t want a goonette, but I’m not a goon so I guess that’s why. I just don’t like the beat and the hook on this one.

Good Dick
It’s a reason why I call Plies the male version of Trina, songs like this. I can’t cosign songs like this; my manhood is instantly reaching for the SKIP button. I can’t listen to another man talk about his meat. NOPE, not going to do it.

Model
Plies is getting on his Lil’ B “pretty boy swag” thing on this song with him calling himself a model. I can get with this one better than the last song. I mean let’s be real…there are some pretty boy thugs out there.

Look Like
Featuring Young Jeezy & Fabolous
I think this is what I have been waiting on the whole album. Young Jeezy spitting that shit that made me like him and Fab dumbed the lyrics down on this one to make it fit with the beat. I can’t front, I like the slow flow on Fab and Jeezy, made the song that much more enjoyable. BANGER!

All I Know
The album is winding down and this sounds like one that should have been left off. I dig the lyrics, it’s just the beat and hook isn’t on my list of favorites. Would I be wrong for skipping this one? NOPE.

She Got it Made
Featuring Bei Maejor; Produced by Clinton Sparks
Okay, Plies did his thing on the remake of “Escape (The Pina Colada Song)”. I can’t front, I usually don’t like singles but this one here goes HARD. Maybe it’s the sample that got me going, or the fact that Queen Jerm even likes this (If you know Queen Jerm you would understand the significance of that statement). I have to give this the stamp…BANGER!

Bottom Line:
Plies did it again, not saying this album was as successful as the other ones, but it did satisfy the audience he was looking for. Plies doesn’t hide the fact that he likes making songs for the ladies, and that fact alone might run some of the fellas off. But if you get away from that fact, Plies makes some decent music. He didn’t give us that “real nigga anthem” like past project, but he did give us a solid performance on this album. Some people will like it, some people won’t. If you are a Plies fan, you’ll like to have this one in your collection.