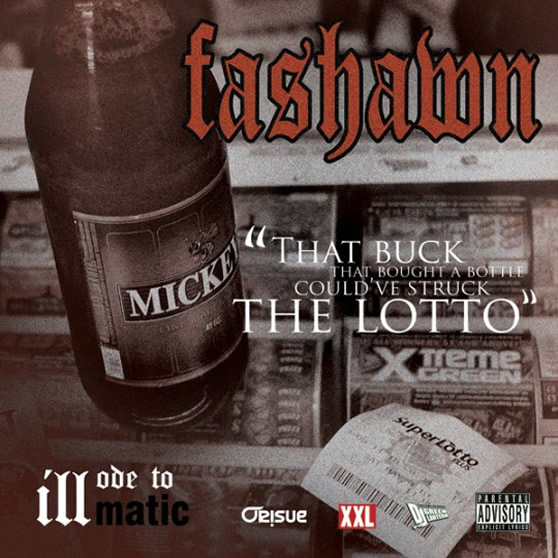 Fresno emcee Fashawn released his debut album Boy Meets World last year. The record received highly positive acclaims, and was considered one of 2009’s most slept on albums. Less than a year later, Fashawn returns with DJ Green Lantern to release a tribute to one of Hip-Hop’s most infamous records Illmatic.

Ode to Illmatic isn’t like most mixtapes: It doesn’t feature numerous guest appearances, the track lengths are not shortened, and there are no freestyles. I’m not the biggest mixtape fan (usually never sounds better than the original), but Fashawn has the lyrical abilities to make this interesting. The mixtape starts identical to Illmatic. “Genesis” begins with Fashawn speaking on the current state of Hip-Hop whereas Nas was talking about keeping it real in ’94. The songs are supposed to sound somewhat similar because they feature the same beats. However, there are times when the tape sounds too familiar. For example, “The World Is Yours” sounds like he took the original lyrics and only changed a few words. Nevertheless, Fashawn finds a way to add his west coast mentality over tracks like “C.A. State of Mind”, “Memory Lane”, and “Represent”… and it works.

Fashawn displays his unique style on “Halftime” with a few ill bars:

“I’m not a student of the game, I’m a motherfuckin’ dropout, blunt-smokin’ gun totin’ nigga with cottonmouth, hangin’ out on the corner, Brooklyn and California, speedin’ through Barcelona, never seen a diploma”.

There are other times when he’s rhyming like his name is Nasty Fashawn. On “It Aint Hard To Tell”, he spits:

“Might have been hard to tell that it was a classic by the sales, I unwrap the plastic then I spark the L, I was in seventh grade when Nas beat Jay, remember it like it was yesterday…”

The highlight of the mixtape comes on “One Love”. Fashawn re-sparks the track in his own words. You can tell that Nas made this personal, and Fashawn did the same without taking anything away from it. There are tracks like “Life’s A Bitch” and “One Time 4 Your Mind” that sound real nice, but “One Love” is that song you’re adding to your iPod and a few playlists.

Bottom Line:
Fashawn is one of the best upcoming emcees in the game right now rather you’d like to admit it or not. I love how he wasn’t afraid to release a mixtape that’ll get hate no matter how well it turned out. Now the album isn’t anywhere close to Illmatic (G.O.A.T.), but he gets the chance to show us how talented he is. This is a definite download. I’ll be looking forward to his music in the near future.