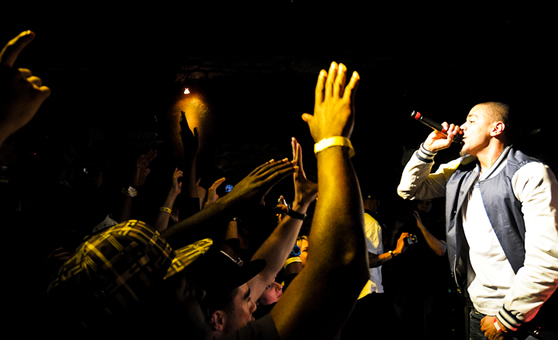 For this week’s installment of Song of the Week, I decided it might be a good idea for me to step in once again (See Pig Face Weapon Waist, The Escape Route & Street Hop for other times I’ve stepped in). The staff here at the ‘Fro have done a great job continuing to provide us with great reviews to read up and discuss so it’s fair to say that they deserve a lighter load and a member to take up song of the week.

The highlight of the week for most of you was the review for Drake’s Thank Me Later, however, this same week about a year ago brought the release of one of 2009’s best mixtapes, J. Cole’s The Warm Up. To celebrate the one year release J. Cole released this freestyle to hold us over and to thank us for supporting him as an artist. With lines such as

“My Way like a Usher song/Higher power where these verses from/You niggas hoes, put your purses on/Church, get your worship on/Born alone, work alone, die alone,/Hot fire like Dylan/Bitches get they dial on/Fake niggas get dial tones/I ain’t no Viacom nigga, I’m a firearm nigga/Look how I alarm niggas”

“Fuck what they say, wishin’ me harm and sorrow/They here today, bet they be gone tomorrow/They catchin Z’s on me, and we gon call them Zorro/I let you sleep today, but it’s on tomorrow”

It’s hard not to support Jermaine

What is there to say about J. Cole that hasn’t been said before? He goes over the Diddy’s “Angels” instrumental, adds a little something to the instrumental and murders it. With everything Cole touches being high heat it’s hard for us not to expect his debut being Album of the Year worthy. But only time and a couple releases later will tell. Until then enjoy DJ LP’s edition of Song of the Week – “The Last Stretch