The Roots – How I Got Over [Review] 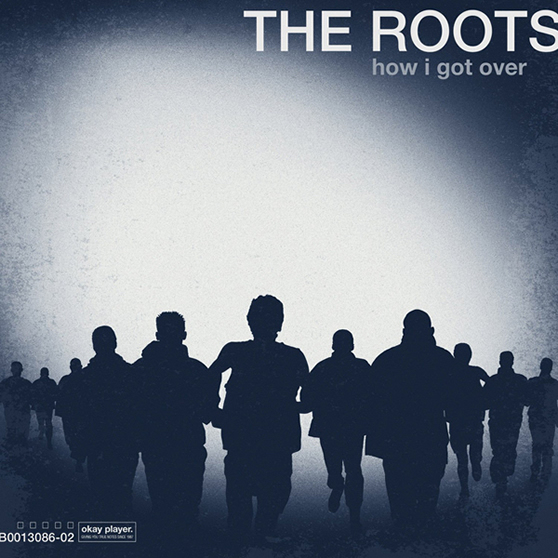 It’s been 17 years since The Legendary Roots Crew dropped their first album. After years of being the livest show on tour, the crowned Kings of live Hip-Hop instrumentation, and most recently, the soundtrack that even white America has been going to bed to on Late Night TV, have brought along a host of friends for the latest studio album. If this is in fact the last album from THE band, what will be the note they leave on?

Sidenote: “A Peace of Light”, “DillaTUDE”, & “Tunnel Vision” are interludes/intros and won’t be reviewed.

Walk Alone
Featuring Truck North, P.O.R.N., & Dice Raw; Produced by The Roots
I really like the feel and base of this song. It has some nice melodies and music to it, but it still feels incomplete. The song is mostly stripped down to drums and a chord loop which makes me keep waiting for the rest of the music to come in and the song to start. It does have moments where it’s more complete, but the majority of the song feels like it’s waiting to get amped. Dice and P.O.R.N. do a good job lyrically but Thought makes sure not to get lost here and commands your attention when he’s on the mic. It does strike me as odd that a song of this title has a 3 person collaboration…or maybe that’s the point.

Dear God 2.0
Featuring Monsters Of Folk; Produced by The Roots
The Roots do a remix/new rendition of the single released by Monsters Of Folk titled “Dear God”. In the same vein as the original slow more emotional type song. Thought, never at a loss for words says,

“Well, I’m in the world of entertainment and/Tryna keep a singing man sane for the paying fans/If I don’t make it through the night it’s like changin’ plans/Harp strings, angel wings and prayin’ hands/Lord, forgive me for my shortcomings/For going on tour and ignoring the court summons/All I’m tryna do is live life to the fullest/They sent my daddy to you in a barrage of bullets/Why is the world ugly when you made it in your image/And why is living life such a fight to the finish/For this high percentage, when the sky’s the limit/A second is a minute, every hour’s infinite.”

I can see folks not feeling this song because of it’s dark sound and overall emotional tone, but it’s honestly one of the realest songs released lately.

Radio Daze
Featuring Blu, P.O.R.N., & Dice Raw; Produced by The Roots
I gotta comment, the transitions from song to song are seamless. This album has the feel of a jam session with various folks just coming up and getting on the mic. This song kicks off sounding like the “Player’s Ball (Reprise)” and quickly becomes a jazz/funk celebration of music. Blu sounds right at home as he quips:

“So what you searchin’ for/From birth born hurtin’ and yearnin’ for certain somethings / lurkin’ and murk ’em got em turnin’ his bed into a coffin/Burning over passions and his passion/Are more or less over what the pastor passed us/Cause see the past tense never really passes/Phases that trap us in cages like classes/Foggin’ my glasses”.

Let me stop right there, cause you need to hear the way he spits this lyrical onslaught. If you aren’t familiar with Blu, get familiar. This dude is the best from the West right now. For him to own this song like he did on a song where no one half steps lets you know how much of a problem this young man is.

Now Or Never
Featuring Phonte & Dice Raw; Produced by The Roots
I think I would be happy with a library of The Roots featuring Little Brother collaborations as evident by this track. With another flawless transition we get a song about progress and growth as an individual. Phonte doesn’t flow long, but his message is to the point. Dice Raw isn’t half stepping lyrically either as he delivers as well.

How I Got Over
Featuring Dice Raw; Produced The Roots
The title song and lead single that had us all hopeful. I’ve always enjoyed this song and it did a good job in setting the tone for the album. I’m kind of curious as to what an album with Thought singing more would sound like.

The Day
Featuring Blu, Phonte, & Patty Crash; Produced by The Roots
This song continues the jazzy feel and soulful trend of the album. Blu, Phonte, and Thought weave the linguistics lesson as Patty sings the hook with her unique sounding voice. Her voice is a little more high pitched than were used to hearing in the mainstream and she sounds sort of like Macy Gray as the key of a child. The entire song sounds like the feeling you get when you wake up and make those plans to change your life and step forward.

Right On
Featuring Joanna Newsom & STS; Produced by The Roots
The drum work on this one is fantastic. Simple but no less than a banger backdrop to the song. Sadly, that’s all I really like about this song. If I’m listening mindlessly, it can get by on the drums, but the odd whistle and haunting hook bother me. Not to mention that STS really doesn’t do anything for me on this song. He’s not bad lyrically, but his voice is almost as annoying as the whistle and hook. I think that this song is a bit too whimsical sounding and airy to really fit into the album as well.

Doin’ It Again
Featuring John Legend; Produced by The Roots
This song would have been even fantastic in 2006 or 2007 when John Legend was the biggest thing on the scene. I don’t know if it’s the infusion of his voice in the backdrop and hook that make this feel like a John Legend song featuring The Roots, or if it’s just that his voice kind of bleeds over anyone else on a song but this one I could do without. The ending is so abrupt that it kind of kills the flow that was developed up to this point.

The Fire
Featuring John Legend; Produced by The Roots
Maybe the break in flow was intentional as this song is definitely a different pace and feel than the rest of the album. It’s not a bad change as the message of this song is still consistent with what I get from the album, but the sound is much different. I wonder if I would have been a bit more receptive to this song at the beginning of the album.

Web 20/20
Featuring Peedi Peedi & Truck North; Produced by The Roots
Let’s be clear, this song is nothing but a cypher. These dudes hopped on a 808 track and decided to just flow hard or go home. Peedi Peedi aka Peedi Crack is one of the rappers I need to hear more from. Dude has a delivery and flow that seems to energize even the most amped up track. Nobody get’s left behind on this exhibition, problem is that it doesn’t fit the album at all. Yeah, that old saying. You’ll know when you hear it, however, I can’t even be mad at them for including it. This had to make some album…any album.

Bottom Line:
Originally, Rising Down was rumored to be the last album, then we got word of this album. No one really knew what to expect because Late Night With Jimmy Fallon has garnered them praise and almost made them a household name in a crossover market. There were fears that the group would be watered down and not the group we’ve come to love. I will say that this album is, undeniably, a different sounding Roots crew. The Legendary has been known to hit us with poignant lyrics, incessant drums, and controversial topics (with Rising Down being damn near militant and stand-offish). This album finds our group speaking on growth, progress, and well, getting over on a more personal level. This album will do just that with new fans to the group, as well as with those that have been supporting the true notes since at least 1993. Two things to note when you listen to this album: One, please have a real sound system. Playing this on your laptop with no headphones isn’t advised unless you have serious equipment. This is a musical journey and you need to be properly equipped to board this ride. Two, give it a few spins before you judge it. Anyone who isn’t feeling this album doesn’t say that it’s bad, they just say it isn’t their type of music…then after a few spins, they recant. This isn’t The Roots of Rising Down, Game Theory, Things Fall Apart, or even the house band for Jimmy Fallon, this is an album that simply put, will eventually Get Over with you.

UPDATE – Scored upgraded to 4.5. This album is already getting better with time.

nappyPicks: The entire album is solid and enjoyable grown up music, but…. “Radio Daze”, “Now or Never”, “How I Got Over” and “The Day” are standouts.