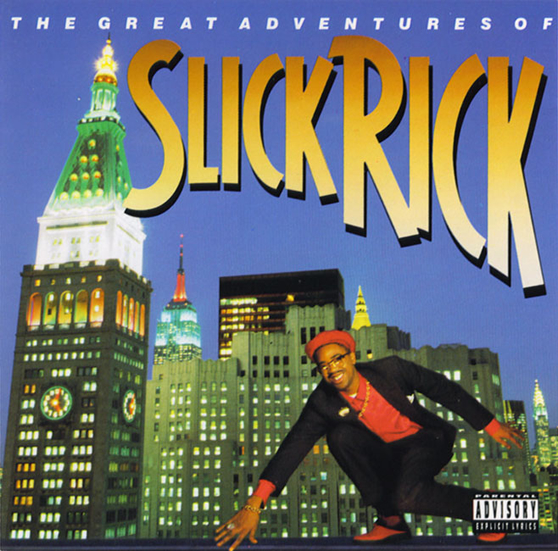 Without this album, a lot of rappers would never have come to be. Albums went from party jams and braggadocios delusions of grandeur (shout out to Rick James) to the artistry of storytelling and imagination with this album paving the way. He’d already released the infamous “La Di Da Di” with Doug E. Fresh and gained huge support from not just the East Coast, but Hip-Hop fans around the country. Often revered as the King of Storytelling, Slick Rick used his wit, humor, various voices, deliveries and subject matter to solidify this album in the halls of Hip-Hop greatness. I’m going to follow my Brother in Fro’dom’s lead and talk about my favorite tracks off the album.

Treat Her Like A Prostitute
Produced by Slick Rick
Let’s not be surprised here, misogyny and Hip-Hop go back like Adam and Eve. Upon further examination though, this is not such a black and white case. When you listen to the lyrics (and the hook), he’s telling a story about brothas getting played/blinded by love.

“It’s your wife / You buy the tramp jewels and clothes / You get sentimental and bring home a rose / Give her everything ’cause you swear she’s worth it / All your friends tell you, “The bitch don’t deserve it” / Love is blind, so there goes your wealth / Until one day, you see things for yourself / Home from work early, Mr. Loverman / You had a card and some candy in your right hand / There’s the mailman, he was short yet stout / He went inside your house and didn’t come back out / Bust it / Just a friendly stop, come on, is it? / The mailman comes and he pays your wife a visit? / The thought alone makes your temperature boil / You say to yourself, she might still be loyal / You open up your door and stand in a trance / You see the mailman’s bag and the mailman’s pants / Came home to party / from work had a hard day / Look around your house and you say, “Where the hell are they?” / Run upstairs up to your bedroom / You look inside your room, you see something brewin’ / Cover your mouth because you almost choke / You see the mailman’s dick way up your wife’s throat.”

Children’s Story
Produced by Slick Rick
I don’t have the numbers to prove it, but I’d bet that this song is probably the most remade or retold song in Hip-Hop history. Some of the emcees to pay tribute to it include Blackstar, The Game, and Snoop. The actual concept of the story telling being done via…storytelling was some of the most creative shit I’d heard at that age. Even today, this song is played at to warm up concerts and clubs throughout the US. I think one of the most telling things about this story is that the same elements that were present in the community when he created this song are present today. Drug use, theft and pursuit of money and police brutality. It’s amazing how truth is timeless, no matter how it’s delivered.

Teenage Love
Produced by Slick Rick & The Bomb Squad
“I Need Love” by LL Cool J came out a year earlier and may have influenced this song with similar subject matter and syrupy slow music. This is one of those songs that a lot of these young rappers coming up could remake and have huge success and get a stamp from the older community as well. I can remember playing this song OUT when I was old enough to experience what this song is talking about. I was bumping this in 93 like it just came out.

Let’s not forget that along with this gem, Slick Rick rocked enough gold to make Mr. T’s necklace assortment look like a starter kit. Da Ruler takes pride in his freshness by even allowing fans watch him put on his collection of gold and diamonds from a tray brought to him on stage. This album reflects that same showmanship and true emcee spirit.

There seems to be a raging debate about the requirement to “stay true/keep it real” in Hip-Hop and the artistic freedom for an artist to tap into his/her imagination to create songs. Funny how we must have forgot that one of the best albums ever made was a blending of the two and a seamless presentation of how to Move the Crowd, or be the Master of Ceremony while transcending the stage/crowd atmosphere.