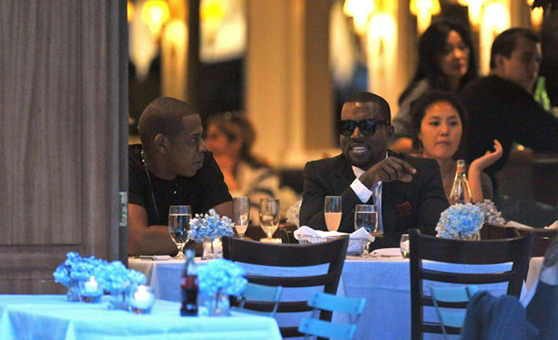 As much as I loved seeing Hov’s name attached to this remix, I’d be lying to myself if I didn’t admit that the star of this track is still Kanye. If his first two verses here aren’t enough, Swizz Beatz drops in out of nowhere, the beat then goes all “I Got The Power” on us, and Yeezy then proceeds to murder the track. So much that I had to write the whole verse out:

What do it mean to be the boss?
It mean second place is the first one who lost
The crucifixion, the being nailed to the cross
Truth or fiction, it’s a hell of a cost
Do the dishes
I’m ’bout to hit that Jeff Gordon
Michael Jordan, the only one more important
But I be feelin’ like Jordan when I’m recordin’
‘Cause every time I record, I dunk to slap the boards
I don’t know what these rappers gon’ do after wards
Prolly spaz like I might do at the awards
Huh, I got the whole crowd goin’ crazy
Homie, I should be rewarded
Gettin’ money, Yeezy, Yeezy, how you do it, huh?
Eatin’ Wheaties, drinkin’ Fiji, bein’ greedy, huh?
Don’t even think you can allude to the rumors
I’m immune to the booze, I’m a prude to you losers
It’s all in time, my nigga
See, I dreamed my whole life that I could rhyme with Jigga
Now Jay my big brother and Bey my lil’ sister
And excuse me, but, you can’t see my lil’ sister
Number one sound across the board, hey
Number one now and forevermore, hey
Number one rule is niggas don’t hate
Maybe I’ll drop the album, nah, all y’all gotta wait
And on the ‘Net they showin’ pictures of my Cali place
My Maybach in NY, but it still got the Cali plates
All my old girls know that I’m the one that got away
I think about at Christmas, and play some Donny Hathaway
And keep my bulletproof hater coat on
Lookin’ at some photos that I’m lookin’ crazy dope on
Hand up, talkin’ shit, yeah, I get my Pope on
And go home wit something to poke on
That’s what Dre said, but this what ‘Ye said
How ‘Ye doin’? Who ‘Ye screwin’?
That’s for my dick to know, before you get to know ‘im
She ain’t give you ass? That pussy fictional
I gotta give her the eviction note
‘Tis “Get yo’ ass out, bitch, vamonos”
Five seconds to the song, and we gettin’ close
I got the power, ma’fucka, if you didn’t know

Jay-Z did have a good line too: “To be continued/We on that Norman Mailer shit/In search of the truth even if it goes through Taylor Swift”. Just saying…