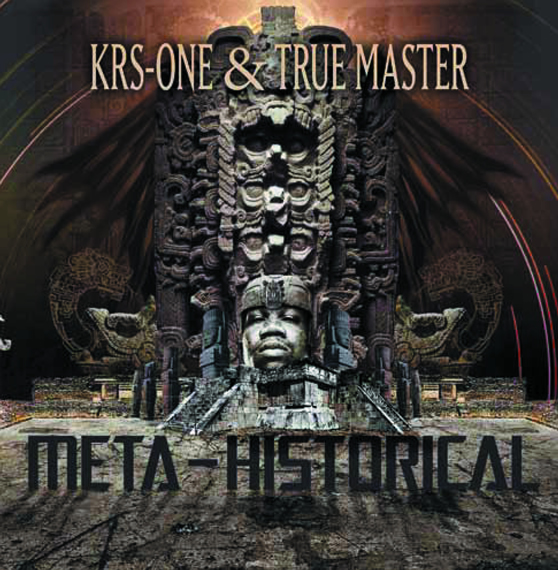 KRS-One returns with yet another collaboration album. Last year, he recorded Survival Skills with Boot Camp Clik emcee Buckshot. This time around he hooked up with Wu-Tang producer True Master who has produced some of Wu-Tang’s finest beats, such as, “Fish”, “Brooklyn Zoo”, “R.E.C. Room”, and more. He has been absent from the Hip-Hop scene lately with only producing four songs in the past three years (for GZA, Raekwon, & Cilvaringz). However, he still displays that “chamber-music” style with his gritty samples and chop beats. I have to give even more respect to KRS-One for reaching out to a producer who in reality hasn’t got the respect he is deserved. Let’s just hope the two find chemistry within each other and give us that raw Hip-Hop that is expected.

There are a total of nine interludes. KRS-One gives Hip-Hop history lessons that eventually leads into the next song. With so many skits, I’ll just drop some quotables to help explain where he is coming from.

1. Intro
“Here is another one, a warning shot, you don’t really want it”

2. Murda Ya’
KRS-One proves his point from the intro because he doesn’t hold anything back as he bodies this track. He takes it back to 1993 because this sounds like it was left off Return Of The Boom Bap. He especially shines during the chorus when he throws his famed Jamaican flow into the mix. True Master shapes the perfect beat that allows KRS to destroy this track. I also love how he chopped Cypress Hill’s “Cock the Hammer” and threw it on during a break beat.

4. Unified Field
Featuring Dr. Oyibo
KRS-One stays on the same pace as he attacks another hot track by True Master. The Wu-Tang affiliate samples Dr. Oyibo for the bridge and puts it together with a haunting electric string. KRS is on point and manages to make a joke while proving a point, “Every time I see another chick showing her ass for money, I holla where your father hunny!!?”

5. Gimme Da 90’s
KRS-One is in his forties and lets us know why people still call him the “Teacha”. He shows homage to the 90’s by quoting some of the decade’s most popular songs or quotes. He definitely has charisma to do a song about the 90’s when most of his fame came from the 80’s. Here are some of the artists that get recognition: Channel Live, Das Efx, Wu-Tang Clan, 2Pac, Cypress Hill, G-Unit, Goodie Mob, Public Enemy, etc.

6. Revelation (Skit)
“If you ever want to escape Armageddon, read a different book”

7. Knowledge Reigns Supreme
Featuring True Master
KRS-One and True Master really complement each other on this one. True Master does great with the chorus and also drops a thumping beat. KRS gets on the mic and spits a few verses about his Hip-Hop leadership,

“Pleasure to meet ya, I’m known as the Teacha,
Stronger, not weaker, Last week, I blew out their tweeters,
Taking it back to Fila’s and beepers,
Not a deceiva, I keep the soul in my street like the sole of my sneakers,
My soul is not old or cold, I’m holdin’ them heaters,
When the story is told, I’ll be known as a focus leader,
If I ain’t defined with this rhyme then the pope ain’t either,
I’m not on the radio because I don’t rhyme about coke or reefer,
But rest assure, the hood know about the Teacha,
Teaching the gospel about hip hop so the devil won’t eat cha,
Come up to the speaker, let me feed ya,
Join this movement padre, we need ya!”

8. My Mind (Skit)
“What is better to have, a stack of money or a stack of knowledge?”

9. Palm & Fist
The Teacha doesn’t stop with the lessons. Here KRS drops some knowledge about the symbolism of the palm and fist. It may seem like a simple song to few but it truly takes talent to write a song like this in rhyme form. It’s clear now why the two decided to name the album Meta-Historical.

10. One Of Them Days
Kris sounds like he’s having fun on this one. He does a little singing on the chorus, and doesn’t stop with the educating lyrics. Quotes like, “Stop being a boy and start being a man” and “Stop saying I can’t and start saying I can” shows the type of person KRS-One is.

11. Ancient Hip Hop (Skit)
“Hip-Hop has no beginning and has no end”

12. Old School Hip Hop
Featuring Jersey
Jersey builds up the beat by singing about the love for old school Hip-Hop. True Master does his best to make the track sound old school as possible. The singing definitely gives this song more of a laid-back feel compared to the rest of the album. Nevertheless, KRS still finds a way to rip it.

13. Naga (Skit)
“If you speak the whole Hip-Hop language, nigga is not offensive”

14. One Two, Here’s What We Gon’ Do
Featuring RZA
KRS-One and guest feature RZA tear this track apart. I’m glad to see RZA on this because he has been producing alongside True Master since the early days of Wu-Tang. It’s not hard to notice how RZA-influenced the beat is too. RZA spits a nice verse on his philosophy, but doesn’t seem to have the same energy level as KRS.

15. Freeman (Skit)
“We got respect from the hood to Cornell West and Princeton”

16. Meta-Historical
I’ll start off by saying this is one of my favorite songs from the album. True Master does an excellent job on chopping the sample into the beat. KRS-One holds nothing back and absolutely murders it,

“Hip-Hop is all spirit, so let’s get down with what the truth is,
They not recording hip hop, they recording what it produces,
Winner and losers, CD’s and toys,
That’s not hip hop, that’s rap music folklore,
That’s why these rappers are no more,
Because they followed no principles, traditions, and no laws,
That’s why the future remembers me, KRS, rhyming for the century”

17. The Struggle (Skit)
“What makes you Hip-Hop is your shared participation in the struggle”

18. Street Rhymer
Featuring Cappadonna
At this point of the album, you have to respect KRS-One. He has been consistent throughout the album and still finds a way to surprise us. On “Street Rhymer”, he reaches out to another Wu-affiliate that hasn’t received much fame. Cappadonna has been with Wu-Tang for the past ten plus years and definitely takes advantage of this opportunity. His swagger-like flow sounds like a mix of Ghostface and Raekwon. This may be the album’s sleeper.

19. He’s Us
Featuring True Master
The album comes to an end with True Master taking his turn on the microphone. True Master is not known for his rapping, but you can’t deny how well he sounds on this. Maybe we can look forward to a solo record in the near future. This is a good way to end the album.

Bottom Line:
This is real Hip-Hop in its purest form. If you’re a fan of Wu-Tang Clan, Boogie Down Productions or the golden era of Hip-Hop, then you will love this album. KRS-One proves once again that he’s lyrically on another level compared to most emcees today. The only problem I had with this album was the total number of skits compared to actual songs. Some of the skits fit perfectly, but I feel that half of them should have been deleted. On the other hand, you can’t complain about the eleven tracks because there is not one song you can call average. Meta-Historical proves that Hip-Hop doesn’t fade away. As long as you stay true to your music and self, then you can make a superb album regardless of your age.