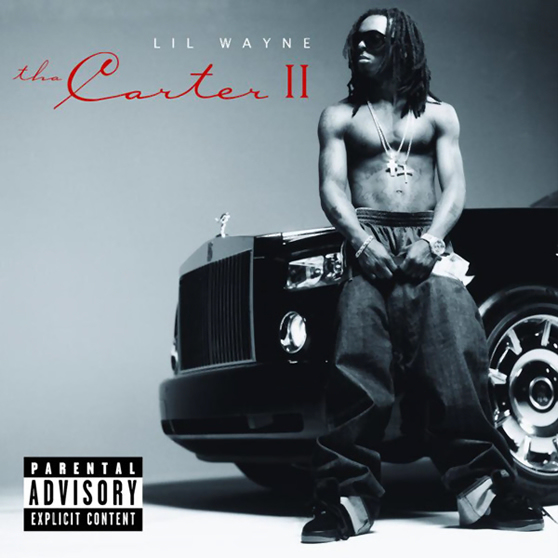 Many people have made the point that Lil’ Wayne has no business being considered a top tier rapper because he has no classic album. People just like those once said the same thing about Eminem. Unfortunately we don’t always understand what we have experienced until much time has passed. Consider Jay-Z and his debut Reasonable Doubt. Critics and Hip-Hop fans alike wrote it off when it was released originally. By 2000 that album was considered an undeniable classic. This brings me to Lil Wayne’s Tha Carter II. Many will say this is Wayne’s best compilation of work. It is an album that is post Hot Boys, yet pre-stardom for Weezy F. Baby. Although Wayne was not considered a mainstream star like he is now, he did gain a lot of notoriety from his previous effort Tha Carter and his mixtape with DJ Drama entitled The Dedication. With this album Wayne intended to up the ante a little bit and prove his claim as the best rapper alive.

1. Tha Mobb
Produced by Heatmakerz
No hooks found on this one. This is just Wayne showing his lyrical prowess on this one. The production is simple yet perfect for this track. Heavy bass is and Wayne delivers a very witty and somewhat long introduction track for this album. After listening to this track you can tell Lil’ Tune did not make this album for the mainstream. He drops jewels such as the “Beat keep crying/And I’m gonna keep beating her/Fee I’m fucking her/I’m deep in her/Sleep in her”

2. Fly In
Produced by T-Mix & Batman
This short track is to introduce the listener to the upper levels of “Tha Carter” which is Wayne’s Domain. This is another no hook joint with only one verse. This beat will be used two other times on the album. Wayne starts off the track with some unbelievable lines.

“They call me Mr. Carter I kissed the daughter
Of the deads forehead I killed the father
Spilled the heart of a mildew hater
I will put them body on chill like gla-ciers
Gracias I’m crazy yes it’s obvious
Going against me is atheist
I got my angels on my shoulders and a quarter of that angel dust”

3. Money On My Mind
Produced by The Runners & DJ Nasty & LVM
Once this Track starts I started thinking that this album has not yet had one piece of production that I haven’t liked, nor could possibly be considered radio friendly. Another track based around hard bass, plus somewhat of a dark feel. I must say this song did remind me a little of Hov’s swag with lines like “Dear Mr. Toilet I’m the shit/Got these other haters pissed/Cause my toilet paper thick.”

4. Fireman
Produced by Malkam Dior
This served as the first single off of the album. Although the production still fits the albums feel, it is much more radio oriented. Honestly, the song had to grow on me. The video was terrible I just remember Wayne walking around with fire around and catching a ride on a fire truck. I don’t know what that was about, but the song is pretty good. I guess this is around the time Weezy F. became a star because a rapper with no relevance dissed him over this song. He claimed he was the fireman first…… Drag-on done fell off smh.

5. More Fire
Produced by Yonny
This is Weezys attempt at Reggae. Why? Someone should have taken away his Purple Sprite when he said this was going on the album. I guess its better than the T-pain voice thing though. Seriously I had a hard time even figuring out what he was trying to say.

6. On Tha Block #1 (Skit)
Normally I don’t like skits on the album, but….. no I can’t lie to you guys skip this. It’s just Wayne and Mack Maine talking about someone wanting to battle on film in South Beach.

7. Best Rapper Alive
Produced by Bigg D
This production may be the first time I had heard Wayne use a rock influenced beat. Many people didn’t like the song but I did. The strings seem to really bring Wayne a certain energy that most rappers do not have. He dropped some dope lines too.

“Fuck up wit all these rookie MCs
(whew!) smell like a bunch of pussy to me
Fuck Em!
Fuck ’em good fuck long fuck ’em hard
Fuck who? Fuck ’em all”

8. Lock And Load
Feat. Kurupt; Produced by T-Mix & Batman
One disappointment off the top. No Verse by Kurupt. He would have been able to kill this beat, plus I think Wayne would have come even harder on this.

9. Oh No
Produced by Yonny
At first I was worried when I read that Yonny had produced another track for this album after the disaster of “More Fire”. To my enjoyable surprise though, he delivered a nice track. Heavy bass and Wayne defiantly delivers. No hook but a nice sample that seems to make the song feel complete. Wayne hits you with a day in his life with the line “Pick a city buy a condo/Find a fine hoe/Let some time go/Chill/What you know about a bongo/Having her mind go/Over a convo/ about dough/Nothing”.

10. Grown Man
Featuring Curren$y; Produced by T-Mix & Batman & Malkam Dior
This definitely changes the vibe of the album a little bit. This is the only song that feels like it was made for radio success. It’s not bad at all though. This is the first place that a lot of people hear Curren$y and it is a nice track to be introduced on (too bad he and Wayne don’t do music together any more). The song is good but Wayne talking about some shit about the sunrise at the end was a little corny. This is a turning point in the album a lot of songs have a soulful sound after this one.

11. On Tha Block #2 (Skit)
Another Skit means another skip

12. Hit Em Up
Produced by Doe Boyz
Although with the previous song Weezy F. slowed it down, on this one he is right back to talking his shit. This song is amazingly raw and hard. He is in rare form “Any motormouth could get hung high/We don’t fuck wit niggaz like fungi/We don’t even hear ya/Hollerin bullshit nigga quit the diaherra”. That’s the Wayne people wanted on Tha Carter 3.

13. Carter II
Produced by T-Mix & Batman
This is the same beat Weezy touched on “Fly In”. He does a good job with it once again. His wordplay reminds me of Jay, true but at times I hear Cameron in him too.

“Yeah I’m from New Orleans, the Creole cockpit
We so out of it, zero tolerance
Gangsta gumbo, I’ll serve ’em a pot of it
I’m wealthy, still fuckin wit that block shit
Wet your ass up, head to feet til your sock a drip”

14. Hustler Musik
Produced by T-Mix & Batman
This is my favorite song on the entire album. This is a very soulful beat and it seems like Lil’ Tunechi has some substance and feelings behind these bars.

Wayne really delivers this song showed his growth a lot. Back in the day he probably would have been too scared to even touch this beat, let alone what he did with it.

15. Receipt
Produced by Heatmakerz
A love song? From Lil Wayne? MOB Lil Wayne? No but seriously this is a nice song. He definitely gets his grown man on, “Uou been peepin me since I was younger/So young that you even called me your little brother”. He was really feeling Ms. Trina wasn’t he?

16. Shooter
Featuring Robin Thicke; Produced by Robin Thicke
Another Rock influenced song, but Robin Thicke brings a more subtle feel to this on. Both artist bring a ton of energy but Wayne takes a stand to talk about how he views southern rap.

“And to the radio stations, I’m tired o’ being patient
Stop bein’ rapper racists, region haters
Spectators, dictators, behind door dick takers
It’s outrageous, you don’t know how sick you make us
I want to throw up like chips in Vegas
But this is Southern face it
If we too simple then y’all don’t get the basics”

17. Weezy Baby
Featuring Nikki; Produced By Deezle
The Song is a little lackluster in comparison to the rest of the album. Some days I listen to it others I don’t.

19. I’m A Dboy
Featuring Birdman; Produced by T-Mix & Batman & Malkam Dior
You knew just like I knew it would happen. Brain “Baby” Williams made an appearance on the album. Fortunately Wayne is talented enough that you really don’t pay the Birdman any mind. This track is defiantly serves as somewhat of an ode to Rakim with not only the production but also the Wayne line, “Thinkin’ of a masta plan/I get money but I’m thinkin of a fasta plan/I’m tryin’ to cash it in”. It is nice to see that Wayne is a student of great Hip-Hop.

20. Feel Me
Produced by Doe Boyz
Nice concept song, Wayne uses his verses as answerers to interview questions. More importantly this is really the only song on the album where he spoke on New Orleans post Hurricane Katrina. “I got to bring the hood back after Katrina/Weezy F. Baby now the F is for FEMA”.

21. Get Over
Featuring Nikki; Produced by Cool & Dre
This song sees Wayne get emotional over the loss of his Step Father. His first verse really says it all.

“Stay strong, be tough, that’s what the preacher tell ya
He never really felt ya, so he can’t even help ya
Need a shoulder to lean on, somebody to cry to
It’s like everything’s gone, but I’m a survivor
Standin on stage in front of thousands
Don’t amount to me not havin my father
That’s real talk, I know a lot of y’all got ’em
But you need ’em way more when you gotta go without ’em
And I’m without ’em, but that’s life y’all
Sometimes you gotta learn to swim with no lifeguard
I’m alright God, shit I’m still breathin
But lose hurt like bullets, I’m about to start bleedin
Throw me down some comfort, cause my heart need it
Tryin to cope wit my chances and meet ’em
There’s a dark road ahead, but I’m tryin to take it easy
Rest in peace Lil Beezy, my nigga”

22. Fly Out
Produced by T-Mix & Batman
Wayne hops on the “Fly In” and “Carter II” beat one more time to end the album. He ends the line with the point he attempted to make the whole album, “And until I die/I’m Da. Da Da Da Da. Da BEST RAPPER ALIVE”.

Bottom Line:
Is this a classic album? I’m not sure but in my opinion it is defiantly Weezy’s best as of yet. This is Wayne at his rawest. No real commercial hit here. This is just Wayne rhyming over hard and soulful beats. Remember he was only 22 when he recorded this album. In 5 years we may very well be saying this was the album. This album garnered critical acclaim, but most of all the acclaim of his peers. After this album every rapper and his momma wanted a verse from Weezy F. Baby.