Lil’ Wayne – I Am Not A Human Being [Review] 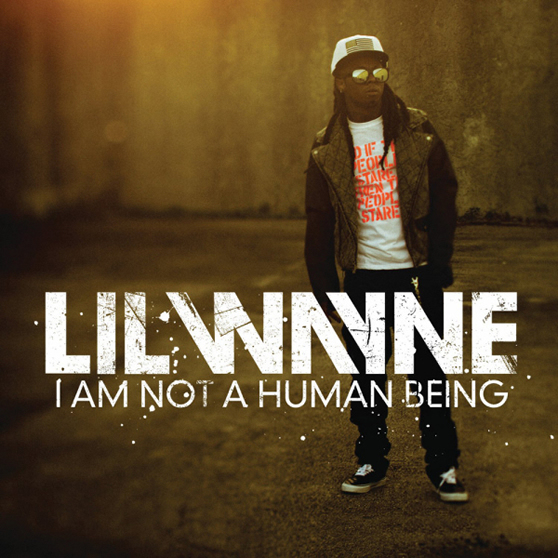 In most circumstances being an incarcerated CEO would put a major dint in ones business plans. Not in Lil’ Wayne’s case. Mr. Carter has managed to release his group Young Money’s album (Selling hundreds of thousands of albums) along with his gold selling Rebirth album. Not to mention grooming his protégés Drake and Nicki Minaj into super stardom with the platinum Thank Me Later and the upcoming Pink Friday album, respectively. Still releasing music videos and staying in the headlines has kept Wayne’s buzz ringing through the public’s ears steadily leading up to his release date.

This past September 27th marked Wayne’s 28th birthday along with his latest offering, I Am Not A Human Being. What was on the mind of Wayne before he was sent away? Let’s find out.

1. Gonorrhea
Featuring Drake; Produced By Kane Beatz
Well if the opening track didn’t have a suspect title as it was lines like “I’m shitting on them, like two girls and one cup” or “pussy ass nigga I don’t want your gonorrhea” will probably be reason enough to screw your face up. Wayne spits some cocky lines over an airy beat by Kane Beatz. Wouldn’t have been my first choice to open the album with but Drake saves the track from total disaster.

2. Hold Up
Featuring T-Streets; Produced by Olympicks
As the second track comes on I can’t help but compare this beat to the previous one. Sounds like Olympicks and Kane Beatz were using the same sample. Also “Hold Up” reminds me of “Whip It” from Wayne’s Tha Leak from 2008. Hopefully the whole album isn’t filled with recycled sounding beats like this. Again here we get Wayne at his cockiest “Based on a true story, I got a million flows, they ain’t even two stories”.

Looks like T-Streets took a bet to see how many times he could put the word bitch into his verse. Nothing spectacular to be heard here. Had two false starts now.

3. With You
Featuring Drake; Produced by StreetRunner
The track begins with some nice harmonizing female vocals that keep flowing through the song perfectly. The only way I can describe the beat is fantastically chilled. Even though the production sets the mood for good times to be had chilling with a lady friend it some how picks up the pace of the album. It’s also great to hear Wayne flow along with Drake without using auto-tune. Shaping up to my favourite song.

4. I Am Not A Human Being
Produced by DJ Infamous & Andrew Drew Correa
Finally we get Weezy ripping the mic apart over an aggressive rap/rock beat. “Nobody deeper than me, bitch dig!..Magazine full of bullets, you can be my cover girl” Now this really needed to be the first song to start off the album. There are some strange metaphors laced into the song like “Can’t see us like the bride shoes.” Sounds like this was recorded during the Rebirth sessions with Wayne yelling the chorus. Hope this is a sign of things to come. Check out the music video here.

5. I’m Single (remix)
Featuring Drake; Produced by Noah 40 Shebib
Despite having the word “remix” in the title of the song it’s hardly that. Wayne’s verses are the same with the only change being the addition of yet another Drake feature who nails the chorus a lot better then Wayne’s original. It’s a bit of a head scratcher to wonder why the beat wasn’t changed up in any way. Some things come to mind that Just Blaze said earlier in the year about the lack of beat changes in remixes in 2010.

6. What’s Wrong With Them
Featuring Nicki Minaj; Produced by DVLP
DJ Infamous provides the inspirational instrumental, which Nicki manages to kill, spitting a ballad of a chorus. Of course there’s Wayne’s brash delivery with lines like; “The world is on my shoulders, shall I dust my shoulder’s off?…Man I’m fly as fuck, you ain’t even next to depart.” Defiantly keeping this on repeat for a while. Can see a lot people starting their day with this track.

7. Right Above It
Featuring Drake; Produced by Kane Beatz
Another amped up beat to get your day started. Loving this. This is more like mash up mixtape material then an album cut. Plus it’s been circulating on the net for just over a month now. Even so it still flows on from the last track. Maybe I’m just a sucker for an epic beat laced with animated rhymes. “…all of my riders do not give a fuck, X Games, guns turn you boys into pussies, sex change…rep my gang like Jesse James.” Again this getting a lot plays on my iPod on the way to work.

8. Popular
Featuring Lil’ Twist; Produced by Cool & Dre
The beats on this album are starting to get a little tiresome. Not saying that the production is bad but so far it hasn’t varied much. Here we have Wayne and Young Money’s Lil’ Twist spitting to the ladies. Twist’s voice is uh…unique to say the least. He does manage to put a certain flow to the chorus that I have to admit is infectious. All the verses are spat by Weezy thus keeping the song his own. Seems like a Nicki Minaj feature could have fitted nicely here. Maybe going back and forth with Weezy. Overall a pretty average track.

9. That Ain’t Me
Featuring Jay Sean; Produced by StreetRunner
Ok now we have another epic sounding beat this time with Jay Sean singing the motivational chorus. “That ain’t me, see I won’t stop, that ain’t me, no I won’t stop, that ain’t me.” It’s the first song on the album where Wayne projects some real passion in his voice and lyrics. Lines like “I’m feeling like I’m on top of the rhinestone/Pull the ladder from heaven, about to climb home…I feel electric, like I’m Raiden, used to play Mortal Kombat when I was a coach potato/Now I’m coming out with faders, no homo” gives the feeling off that there’s a lot more in stock for Wayne’s musical future.

10. Bill Gates
Produced by Boi-1da & Matthew Burnett
The subject matter for a track called “Bill Gates” should be fairly obvious; “I used to be ballin’ but now I’m Bill Gaten” Wayne sets the haters straight over the Dark Knight sounding beat provided by the Boi-1da. Nothing much else to analyse here apart from Weezy F. Baby spitting hot shit over a blazing beat.

11. YM Banger (Bonus Track)
Featuring Gudda Gudda, Jae Millz & Tyga; Produced by Mike Banger
The flow of this album is almost non-existent and this song emphasis that more so. Again we get the Young Money crew bragging over a hyped up beat, which is getting extremely tiresome. Let’s the album fizzle out instead going out with a bang. Big skip here.

12. YM Salute (Bonus Track)
Featuring Lil’ Twist, Chuckee, Gudda Gudda, Jae Millz, & Nicki Minaj; Produced by Lil’ Wayne. Mr. Pyro, & Polow Da Don
The previous track should have been left off to slim down the album and replaced with this one. It would have served perfectly as a posse cut if placed in the middle of the track listing. Yet again it’s another Young Money anthem. Nicki Minaj’s verse stands out with suggestive lines like “blowing kisses to soldiers I am Marilyn Monroe, but we shoot em up, camouflage me.” Naturally Wayne closes out the track with what sounds like one last syrup binge he did before heading to prison. “I’m a purple heart proven war vet rookie.” Sure. Decent enough track.

Bottom Line:
After listening to I Am Not A Human Being it’s clear that most of the tracks were recorded and thrown together quickly before Wayne was sent away. Plus a lot of the other tracks seem like left over cuts from either Rebirth or We Are Young Money, which messes up the consistency of the album. The fault of this is the order of songs. In a nutshell the album doesn’t flow correctly.

Another thing about this album is it has the sound and feel more of a mixtape than a retail album. But to focus solely on Wayne’s lyrics; it is good to hear his quirky metaphors without any T-Paining.

Another down fall of the song selection is that there is no depth shown that we know Wayne has. For subject matter all we’re given is; Wayne being rich, being able please women with money and sex and that his crew is number one. Now that pretty much sums up commercial Hip-Hop at the moment but I was expecting more range from Wayne like his thoughts on his prison sentence and leaving his loved ones behind. While this will tide over most die hard Weezy/Cash Money/Young Money fans, Tha Carter 4 will be the album to watch for.

nappyPicks: “With You”, “Bill Gates”, “What’s Wrong With Them”