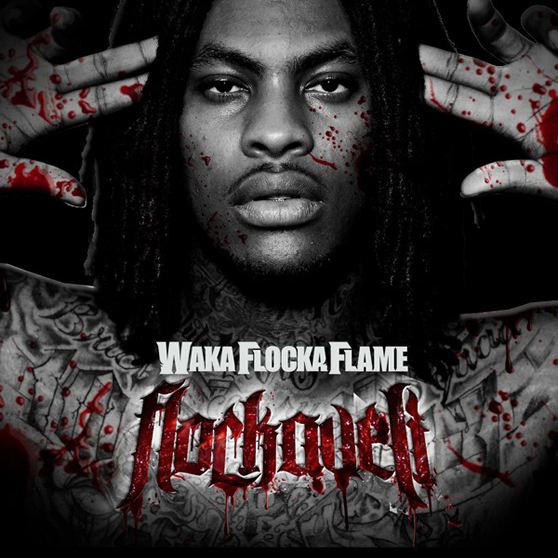 Let’s be honest, for a lotta people, Waka Flocka Flame is exactly what’s wrong with Hip-Hop. From saying things like “The niggas who they say is lyrical, they ain’t got no shows … that ain’t finnin’ to get you no money“, has made Waka the poster boy that Hip-Hop purist point to when that claim Hip-Hop is dead. Being proud to not be lyrical, naming his album Flockaveli, and some appearances in the media have not helped matter either.

Being that I’m from Georgia (Home of Crunk!) and my favorite MC’s are lyrical, I can see both sides. Yes, hearing the intricacies of Nas’ verse on “Verbal Intercourse” is awesome. But also playing “Never Scared” before a football game is also awesome. It’s a place for it all kinds of Hip-Hop and truly it’s a place for Waka’s type of Crunk/Club music too. But how does a album full of Waka sound? Well…

1. Bustin’ At Em
Produced by Lex Luger & SouthSide
Waka brings out the gun ad libs early and then quotes Biggie on the first track of the album (“Shoot first ask questions last…”). From the yelling of him name to the Lex Luger beat to shouting out to his mother/manager and Brick Squad, this is your standard Waka Flocka Flame track. I would say you’ll hear this is one in the club, but only for a few seconds until the fights starts and they have to kick everybody out.

2. Hard In Da Paint
Produced by Lex Luger
This beat will be at the top of the list for years’ best. I see that Lex Luger added his name (again) on the beginning of the track for the album version. Honestly, this is probably Waka’s best song and the one that proved he had more than “”O Let’s Do It”

3. TTG (Trained to Go)
Featuring French Montana, YG Hootie, Joe Moses, & Baby Bomb; Produced by Lex Luger
I guess it’s a good as time as any to state that Lex Luger produced 11 out of 17 tracks for Flockaveli. I mentioned this now because this songs sound a lot like the previous one. Other than Waka and French Montana (Both managed by Waka’s mom Debra Antney by the way) and without Googling, I really don’t know anybody else on this track. Besides the song having a silly name (TTG? Really?), the only thing that stands out is the terrible fake OJ Da Juiceman at the end.

4. Bang
Featuring YG Hootie & Slim Dunkin; Produced by Lex Luger
The first four songs of this album could be combined and not many people could tell the difference. This is also another that’ll start a riot in the down South clubs: “We in this bitch throwing gang signs main!”. Wait, Waka’s a Blood? “B-L double O D, right side the flag…”

5. No Hands
Featuring Roscoe Dash & Wale; Produced by Drumma Boy
Guilty pleasure time. I tired to hate this song, I really did, but it’s so catchy. Also, I’m all for any song that has girls shaking it on the dance floor. Wale’s inclusion here may seem weird but at the end of the day he turned in the best flow. This is a good change up in the mood of the album too.

6. Young Money/Bricksquad
Featuring Gudda Gudda; Produced by Lex Luger
If I was to choose a representative from the Young Money and Bricksquad, I don’t think it would be either Gudda or Waka. Yea, this collaboration doesn’t turn out to well. Wanna guess what the hook is? The song title over and over again. Sigh…

7. Fuck The Club Up
Featuring Pastor Troy & Slim Dunkin; Produced by SouthSide & Tay Beatz
I gotta tip my hat to Waka for getting Pastor Troy, one of the OG Crunksters, on this track. What’s funny is that Troy shows that you can be hype AND be able to rhyme and turns in the best verse here. Other than that, this track is forgettable.

8. Homies
Featuring YG Hootie, Popa Smurf, & Ice Burgundy; Produced by Young Prince-n-Purpz
Another posse track. This is at least better than “TTG” by the beat alone. The tempo is also slower here which is a nice change of pace.

9. Grove St. Party
Featuring Kebo Gotti; Produced by Lex Luger
CJ from GTA: San Andreas isn’t the only one that reps Grove Street and apparently it’s a party there. There’s yelling there also. This party kinda sucks too.

10. O Let’s Do It
Featuring Lil’ Cap; Produced by L-Don Beatz
The first single off the album and the first certified hit by Waka Waka. This song also contains my favorite opening lines of the year; “I fuck my money up…”. I’ve been there. Of course after hearing the remix “O Let’s Do It”, I much rather here that version.

11. Karma
Featuring YG Hootie, Popa Smurf & Slim Dunkin; Produced by Lex Luger
How many times can you start a song out by making gun shot noises? According to Waka, there is no such number. The title is loosely tied in to the song (And I mean loosely) and that may be one of the only things that will help you identify this song from the others on the album.

12. Live By The Gun
Featuring RA Diggs & Uncle Murda; Produced by Lex Luger
Why I first heard this track, I could have sworn it said featuring Rah Digga; that would have been weird. But I am a Uncle Murda fan and him and Waka didn’t seem too crazy since both use a lotta ad libs (Plus both are from New York). The result sounds more like two NY rappers jumping on a South beat (Murda ‘s verse is good though).

13. For My Dawgs
Produced by Cedric “Yayo” Herbert
When I saw the video for “For My Dawgs” and I kinda liked it then; the mellow beat works with Waka here. If the album was a mixture of songs like this and the stuff from Lex Luger, it would have been a better album. Oh yea, this one is for his dawgs.

14. G-Check
Featuring YG Hootie, Bo Deal, & Joe Moses; Produced by Lex Luger
Flocka gets back on his buck shit and starts “G-Checking” busters on this track. I like the hook because I can see dudes saying it after somebody get punked out (“G-Check G-Check G-Check…”). As for the beat, once again very similar.

15. Snake In The Grass
Featuring Cartier Kitten; Produced by Lex Luger
Waka adds barking to his ad lib repertoire here but the song is about “snakes in the grass”. The girl reminds me of Pinky for some reason (Yea, that Pinky). It is good to here a girl rapper on such an aggressive album; I mean, I didn’t hear anything that Nicki Minaj should worry about but still.

16. Smoke, Drank
Featuring Bo Deal, Mouse, & Kebo Gotti; Produced by Lil’ Jon & NIKO
Waka Flocka and Lil’ Jon seems like something that would make so much sense on paper. But then I hear slowed beat and wonder why if this is the same Lil’ Jon. This was the time when it would have made sense to break out with a beat from 2008 and let Waka go crazy (Kinda like this). Mission failed.

17. Fuck This Industry
Produced by Lex Luger
While some/most rappers end albums with a “introspective track”, Waka tells the industry to go fuck themselves. Okay, on full listen it is an introspective track for Waka Flocka Flame. This is not too bad considering that a song with a full theme is scarce on this album.

Bottom Line:
First problem: Too long. For the type of music Waka FLocka Flame makes, 17 tracks is way too much. I actually think this is a case where an EP would have done a better job and made his material less monotonous.

Another problem is getting the new producer Lex Luger to produced a bulk of Flockaveli (Flocka calls him his Dr. Dre). Remember Rick Ross’ Teflon Don album? Lex Luger produced two of it’s biggest hits “MC Hammer” & “B.M.F. (Blowin’ Money Fast)”. What was the problem most people had with those tracks? Yea, they sound too similar. That happens on this album far too many times.

Also, with Brick Squad being yelled so many times on this album, where the hell is the OJ Da Juiceman & Gucci Mane features? Is “Short Bus Shawty” gonna be the best song they ever put out as a group (Okay, I know it wasn’t really them but it’s on the radio).

In my opinion, albums like these are not to be played all the way through in one sitting. It’s suppose to be played when you wanna get excited right before a game or before going to the club. There are a handful of songs on Flockaveli that you may wanna check out but if you didn’t like what you heard on the radio, Internet, or television, I’m betting you won’t like the other ones on this album.