Devin The Dude – Gotta Be Me [Review] 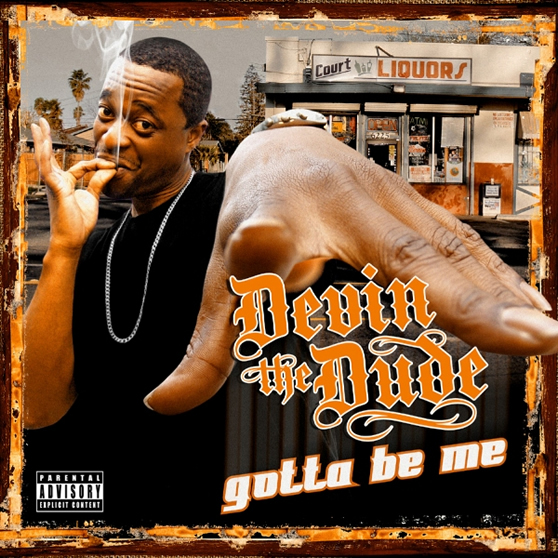 I have to be honest with you, even if at one time in my life I participated in a “cipher” that had nothing to do with rapping, that doesn’t mean I like listening to rappers that talk about that subject all the time. That was my problem with Devin. I like his music; I just don’t like listening to it all the time…if that makes sense. I wasn’t really impressed with his last effort Suite 420, it was mediocre at best. I decided I would give Devin another try when Gotta Be Me dropped. Let’s see if Devin came back hard (PAUSE) or did the blunt burn out?

It’s Goin Down
This is just an intro…a little talking and a nice beat to prepare you for the album. Go ahead and start splitting your cigar and get your smoke straight so you can roll up.

Come and Go
The first thing that hits you is that smooth ass, dope ass BEAT! This really hits you in the head like BOOM! Devin is giving you his usual freaky tales but to me on this one, he spitting like 3 Stacks! Maybe I have been sleeping on Devin, but he showed the people something on this song.

I Like What U Do
Okay…Devin is killing it with the beats on this album so far. This song will definitely put you in the mood. He reminds me of Too Short, but a Southern version. If the production on this one don’t make you like the song, something is wrong with you.

Shut Up
The infamous Pinky scene from Next Friday.

Gotta Be Me
The title track of the album and by far the DOPEST. The hook is from an old Master P song “Go To Be Real”. The way Devin flipped it was CRAZY. This is definitely one that you can VIBE to. It is just that smooth.

No Need To Call
This is one of those “fun” songs that Snoop got away with, Redman got away with, and now Devin is doing it. I can’t be mad at him, but the only thing that saved it was the production.

Gimme Some
Devin goes into his R&B alter ego on this one. Is it me or doesn’t he sound like Trina on this one? LOL!

You So Real
The lull didn’t last long, Devin came back HARD (no pun intended) on this song. I am starting to see that Devin loves the women. This song sounds like it could be some Barry White song. HOT!

They 10’s
Another scene from Next Friday.

Jus Coolin’
This is one of those songs that will put you in there while the smoke is lingering. He even mentions it in the song! It’s mellow and it has that bass that want you to have on a song. I’m feeling it.

Ain’t Goin Nowhere
I really don’t like the production on this one, but I like what he is saying and the hook, so I can give a slight pass to Devin on this one.

When Will I Win
The funk is back on this track. This album is really for the grownups. Songs like this one will fly over most of the youth. This song right here makes you think about all your hard times when you thought you were destined to finish in last place. DOPE.

Fuckha
More Southern pussy tales from the Dude over some funky production. Like I always say, as long as your formula is working DON’T CHANGE A THING. Devin wins again on this one.

I’m High
This is the outro of the album…more talking, dope beat for you to ride out to, and it definitely finished the album out on a good note. Time to put the blunt out for the drive home.

Bottom Line
Devin did not let his fans down on this one. Even though I consider myself a casual fan of Devin’s I LIKED this album. I have even talked a couple of people into copping the album. This album is about weed, women, and sex…and there is nothing wrong with that if you keep the listeners attention the whole way through. Devin successfully did that on this offering. The production was the clincher for me. Most time the pothead music is all over the place and not focused (main reason why I don’t listen) but this was like a journey in the life of Devin, one that I don’t mind listening to on repeat.