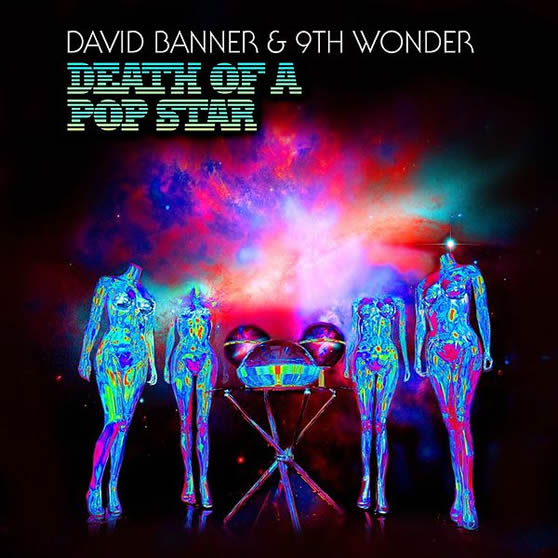 The surprise combination of 9th Wonder and David Banner may not make sense on paper to some, but the duo has linked together to make the collaborative album Death Of A Pop Star. First intended to be a free mixtape, the full-length and much delayed project has finally been released.

As for the album title:

We were just talking about the death of contemporary music. How have we continued to let music go in the direction that it is? It’s almost impossible for there to be another Michael Jackson or Usher or Chris Brown. And 9th said “Damn! That’s what we should call it. Death Of A Pop Star. – David Banner

Interesting. Let’s check this one out.

1. Diamonds On My Pinky
Produced by 9th Wonder
In interviews about this album, David Banner has made statements about being taken more seriously about being a lyricist; here you can see he’s trying to prove that. Not many rappers can fit Green Lantern’s weakness, the effect of Obama election on Black people, Soundwave, and suicide all in the same rhyme. 9th Wonder gives him the proper platform that sounds haunting but still Hip-Hop. The singing in the background was a great touch too.

2. No Denying (Channel 3)
Produced by 9th Wonder
This was the first song I heard from this project. I initially thought this would be the intro since it’s also barely two minutes like the previous track. Like a majority of 9th’s productions, he takes a soul sample and chops the shit out of it (So much to the point you might think he had a someone actually sing the sample instead. Hmmm.). This is one of the songs that makes you understand why 9th Wonder has hardcore fans; the beat is crazy.

David Banner is still dropping knowledge. At times it sounds like he loses the flow, but he’s mostly in control:

3. Mas 4
Produced by 9th Wonder
This songs follows the short time format as the other tracks so far as it’s really short. Actually it’s roughly a minute and a half. For some reason it reminds me of Nas’ “Come Get Me”. Okay, lyrically it’s not on that level but 9th does a great DJ Premier impression here (That’s not a bad thing) with Banner spitting battle lines (“I’m shooting the gun/Man this ain’t a starter pistol but when I pull it they run”). Good track but it’s sound like it was for mixtape.

4. The Light
Produced by 9th Wonder
The first “full track” on the album and sadly, I don’t like the hook. I don’t hate hook; I just thought it could have been much better. I will give props on the production. While it won’t be on my list of best beats for 2010, 9th does show a lotta versatility because I thought Banner had stepped behind the boards. Still the song has a good message.

5. Slow Down
Featuring Heather Victoria; Produced by 9th Wonder
Apparently, this was the album’s first single (I had no idea). This sounds like something I would’ve heard on a Little Brother album. And just like “No Denying (Channel 3)” it sounds like a soul sample (It’s not). David Banner tries to comprehend the fast ways of a groupie or a stripper (Think Outkast’s “Jazze Belle”). I understand the message and I think the song is good but Banner sounds like he had his cap on when he recorded this one. Just my thoughts.

6. Be With You
Featuring Ludacris & Marsha Ambrosius; Produced by 9th Wonder
This is probably the most known track off the album. It’s also the most accessible too with Ludacris riding shotgun and the beat having the most radio potential. The funny thing is that hearing this track first will throw people off on what the rest of the album is about. Even with a title called Death Of A Pop Star, it’s like they HAD to make this track. But don’t think I’m dissing the actual song; I like it. It’s smooth and if I was going out on the town and this came on, I’d feel like getting my grown man on. Check out the music video here.

7. Stutter
Featuring Anthony Hamilton; Produced by 9th Wonder
Just like the song title, here Banner utilizes a stutter in his flow (“Hello b-baby h-h-how you doing?”). It’s been done before (Especially with talking to a girl scenerio) but this is a good execution of it. It make take a couple of listens but from the Anthony Hanilton use to the beat box portion of the hook, this is a really solid song. A stand out actually. By the way, where the hell has Anthony Hamilton been?

8. Silly
Featuring Erykah Badu; Produced by 9th Wonder
I was one of the people that shook their head when I heard 9th Wonder had started rhyming under the name 9thmatic. But you know what, he drops a quick verse here and it wasn’t bad at all. David Banner also has a verse and just like 9th’s it basically talks about there accomplishment in the their respective careers. Erykah provides the chorus (Who doesn’t like Erykah Badu hook?) over a nice beat. You’ll wish is was longer than two minutes.

9. Something Is Wrong
Featuring Lisa Ivey; Produced by 9th Wonder
First off I’ll say that the first verse on “Something Is Wrong” may be some of the realist lyrics of any Hip-Hop song in 2010. I think this song is the essence of what the album was going for. Banner goes in:

In Chi-Town, D. Albert’s laying on the ground
His life bleeds away while other folks stand around
We gangstas, but we can’t stop the pain in our town
I watched it on the net and that moment was profound
The OG’z gotta put the BG’z in check
I’m tryna do sum’hin but I need y’all help
We started gangbangin’ to protect our self
Now it’s power and respect to kill everything for wealth
.And it’s the same thing in rap
You tell the kids to stay hood and you ain’t even in the trap
He ain’t never sell dope, he ain’t never did time
And if you did, why would you want them to walk the same lines?
It’s like we travel back in time
Took the whip with the crack, now it’s black-on-black crime
Yeah, we put our cities on the map
But they call it the trap because most hoods are just that – a trap!
YEH!

From the Rick Sanchez snippet taken from a CNN interview, to the hard hitting beat, to the Lisa Ivey hook (Who I initially thought was Faith Evans), all this just works well together. Great song.

10. Strange
Featuring Big Remo; Produced by 9th Wonder
On the last track on the album, we’re asked questions that are plaguing the community. Big Remo stole the show here:

A Black woman play momma and daddy
While daddy ride around all day flossing his caddy
He got the 24’s spinning. Three or four women
But he’s much too busy for the kids to come visit
So he send them to his sister’s
And her baby father been tripping
And they stuck dap in the middle
You need to sit yourself down a minute and kiss ‘em
Now you in child support court trying to claim that you miss ‘em
Oh really?

Another thing that’s prominent here is the beat and at the end of the track we’re treated to live drums. Strong finish.

Bottom Line:
In Hip-Hop, there’s fine line between being preachy and relatable. I honesty think that for the most part, 9th Wonder and David Banner achieved this tip rope walk on Death Of A Pop Star. It was also a good job for both artist here adjusting to each other styles. This may be my favorite 9th Wonder collaboration album right behind Murray’s Revenge.

One problem here may be the length of the album. While making a 30 minute album can let you trim the fat of filler, it can also make the flaws much more noticeable. But even though the album can sound like a sampler at times, it’s still a fine outing by David Banner & 9th Wonder. Update: Okay, this DOES deserve 4 Stars.