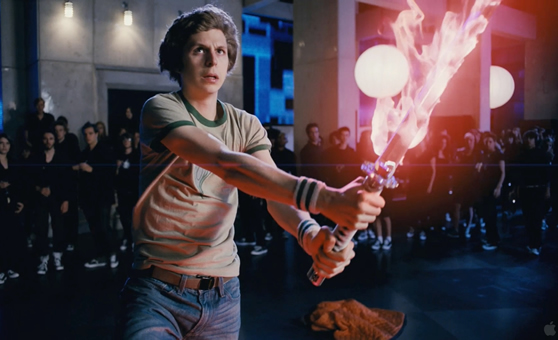 On January 8th 2009 I made this statement: “There’s a few loves in my life. One of those strong ones is Hip-Hop. But honestly, another one is watching movies”. And on January 8th 2010, it’s still the same. Just like last year I will post up all the movies I saw in 2010. But as a added bonus, my homie and fellow movie nappyafro head Verbose will be also joining in. After the list, we list our individual Top 5 Best Movies as well our Top 5 Worst Movies. Join along…

Note:
* Mean only B-Easy saw it
** Means only Verbose saw it

5. La Horde (The Horde)
Two rival gangs meet in a rundown apartment complex to do battle. At that very same moment, the whole World over, the dead all rise up and swarm the living. Trapped, the 2 gangs decide to work together to survive. This movie is a total bloodbath, with some pretty funny dialog. Just a straight up fun, fast-paced zombie flick.

4. The Killing Jar
Filmed on a shoestring budget, the only reason I even gave it a chance was to see Michael Madsen play the closest thing to “Mr.Blonde” that he’s done since. Its dark, good dialog, always keeps you guessing. This one is a real sleeper.

3. Enter The Void
A cinematic masterwork. Nothing like this has been attempted like this, ever. Its very dark, frightening (theres a car crash scene so real it made me nauseous) and deserves to be seen by anyone with a love for film. Only drawback is the legenth, otherwise, pitch perfect and visionary.

2. Black Swan
Darren Aronofsky has yet to let me down with anything since PI. This is probably his worst movie yet, but its still heads and tails better than most movies you’ll ever have the pleasure to watch.

1. Scott Pilgrim vs. The World
The true geek in me found this to be the most enjoyable movie I’d see in years. From effects to music to dialog to hot chicks and cool superhero fights, this one is Spiderman for the hip kids. But I mean that in a good way. Classic, A Must See.

5. The Fighter
Years later, don’t be surprised to see The Fighter ranked in the upper echelon of boxing movies. Plus, this movie remind people that even though Christian Bale may be a dick on movie sets, he is a bonafide actor.

4. Toy Story 3
No Godfather Part III shit here. Not many second sequels are as good as Toy Story 3. And by good I mean it makes grown men cry. Damn Andy. Why you had to grow up?

2. The Social Network
You remember Jesse Eisenberg was called the poor man’s Michael Cera? Yea, me neither. David Fincher proves again why he’s my favorite director. Who knew that a movie about the founding of Facebook was this interesting? And I don’t even have a Facebook page.

1. Exit Through The Gift Shop
“The world’s first street art disaster movie” is also my favorite movie from 2010. Sometime the best stories are the real one. Or the made up ones. Even if it turns out that we’ve all been tricked by Banksy, this movie is still awesome.

5. Grown Ups
I honestly dont know why I hated this so much. With the exception of Kevin James, I’m a huge fan off most of the cast’s previous work. I laughed maybe once or twice. And the rest was formulaic claptrap that bored me. But middle America loved it, so maybe I’m the crazy one.

4. From Paris With Love
I make a huge point to sit all the way thru a movie unless I ABSOLUTELY cant take it. And I couldnt take this. I got about 25min in and I bailed. Really shitty stuff. Just retire already Travolta. You got the Jet, give it up bruh.

3. Casino Jack
^^see above^^  I’m a fan Spacey, you can recover, just dont do something this boring and un-funny again and we can all probably forgive you.

2. Saw 3D
A horrible end to a horrible franchise. The first movie had its moments and brought something new to the cinematic table. But it all went down hill from there until it dragged us into a pit of hot garbage with this one. Thank Christ these are done now. Use those 3D bucks to see Jackass 3D instead. At least its funny.

1. Cop-Out
I used to be a huge fan of Kevin Smith’s work. Clerks, Mallrats, DOGMA, Chasing Amy. The man has made some REALLY funny movies over the years. And MAYBE this couldve been salvaged if they had replaced one actor: Tracy Jordan. Sorry, Tracy MORGAN. When is hollywood gunna realize that they’re abusing a mentally challenged man!?? Hes autistic and a little downs all wrapped up in a big goofy package. Bruce Willis couldnt save this, Smith couldnt save this, and I’m pretty sure Tracy had no idea where he was when they filmed it. Save your money and see the funny buddy-cop movie this year; The Other Guys.

5. Alpha And Omega
As soon as I watched this I asked Verbose did it really go to the theaters. There is some fun to be had here, but with the bad animation and predictable story, this should have went straight to DVD and not in your local cineplex in 3D.

3. Skyline
I’ll give this movie props for working with a low budget. I even give the movie props for giving Donald Faison movie work. But this shit should have been on the SyFy Channel. Period.

2. Just Wright
Let’s be real, every time Common and Queen Latifah kissed or had sexual moments, that shit was real awkward. And Lonnie playing in the NBA and dunking on fools? Naw man.