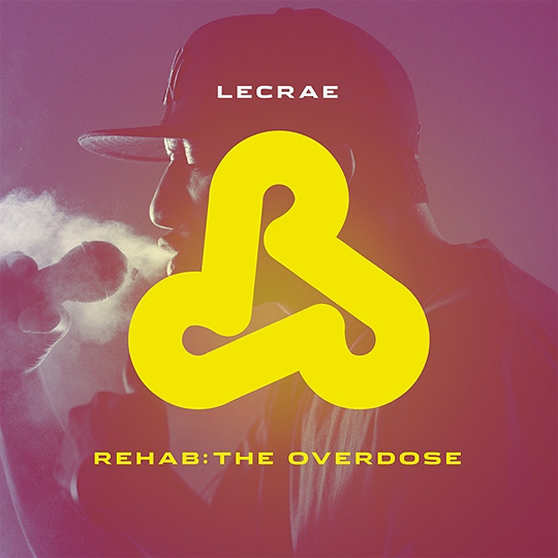 Okay, lemme give you some info on Lecrae just in case you don’t know. He is a Christian Hip-Hop artist who has released 5 albums with Rehab: The Overdose being his fifth, and he sells! He usually gets the top spot in iTunes Hip-Hop sales and I remember his album Rebel outselling a lot of major albums (At one point it was even more then T.I.’s Paper Trail). His music is Godly and focuses on bringing the glory to God and not himself, for Christians like me, he is a perfect example of what one should be. Don’t sleep on his music though; he got lyrics with beats that wreck. So without further ado, here’s a review of his latest, Rehab: The Overdose.

1. Overdose
Produced by Street Symphony
This song begins with a hard beat with Lecrae talking about he is overdosed on God, meaning his old self is gone. He talks about how rappers now a days is just talking and don’t live how they say while addressing how people may consider him lame cause he runs with the Lord (But he unashamed). The chopped up chorus is a good addition. Good start.

2. More
Produced by Kadence for ATP
This is my early favorite. Lecrae just explains how every part of God he needs more. The beat has a dark feeling with hard bass and a haunting choir singing in the background. This song holds true to its meaning and it just sounds so climatic you gotta nod your head.

3. Battle Song
Featuring Suzy Rock; Produced by Tony Stone
This song starts off with a battle chant and a chorus by Suzie Rock. I love Creas opening line, “I was taylored to smash the mic swiftly like Ye did”, Lecrae got some good lines on this one, its mainly about how we go to war for God and if we die, its our gain.

4. Anger Management
Featuring Thi’sl; Produced by D-Flow (Thebrassman)
This song has a good message and awesome beat. It’s about how we get angry and need that one thing to help relieve us. Which is God if you dont understand this album yet. Thi’sl and Lecrae drop some gems here; I love this one.

5. Blow Your High
Featuring Canon; Produced by Street Symphony
Now this song got a nice melodic beat and a feature from Canon. If you cant guess what it’s about, its about weed and how he has some real truth for those who just smoke to get away. Canon has a great verse and I think he steals the show.

6. Strung Out
Produced by CheeseBeats
The beat on this one isn’t as good as the previous songs. The songs about how the world screws him over and leaves him in the dust (Haven’t we all been there before?). He thanks God for being there with him through the healing process. Alright song. The world can be a messed up placed sometimes.

7. Chase That (Intro)
Produced by Joseph Prielozny
Just a instrumental intro for the next song. Nice beat.

8. Chase That (Ambiton)
Produced by PK
This song might be the best on the album; he talks about when he was coming up battle rapping in school and chasing the fortune and fame. The story is a great one as he turns his life around and chases for God’s glory. He regrets how he acted and is glad to keep going for God. The beat here is probably the best production on the album.

9. The Good Life
Featuring J. Paul; Produced by DJ Official
I like how this song starts off, smooth ass beat (Can I swear on a Christian review?). Crea tells a story about fame and how it lies; when you get there it aint what it seems. Without God you cant have it all. J. Paul does a great chorus.

10. Like That
Produced by CheeseBeats
This song is basically Lecrae telling a girl to leave the guy she is with behind because she doesn’t need to dedicate her life to a abusive man when she can live for God and feel his never ending love. This song would probably be eaten up by the radio if Christian artists got their due. The beat is great and the message I believe needs to be heard. Great song here. Catchy chorus too.

11. Going In
Featuring Swoope; Produced by DJ Official
Last song on the album. Does it deliver? This is exactly what it sounds like, Lecrae dropping some dope knowledge and him going in on the track to make an awesome ending. This Swoope dude who is featured sounds like Lupe Fiasco to me (Not a bad thing).

Bottom Line:
I know this type of album isn’t for everyone (I’m looking at you Big Brother Verbose) but it’s definitely what Hip-Hop needs. I believe Cota said positive music needs more plays and I truly believe that. Religious or not, this album is great. I know it’s not for everyone but its definitely a must hear and I can honestly say this man’s music has changed my life.