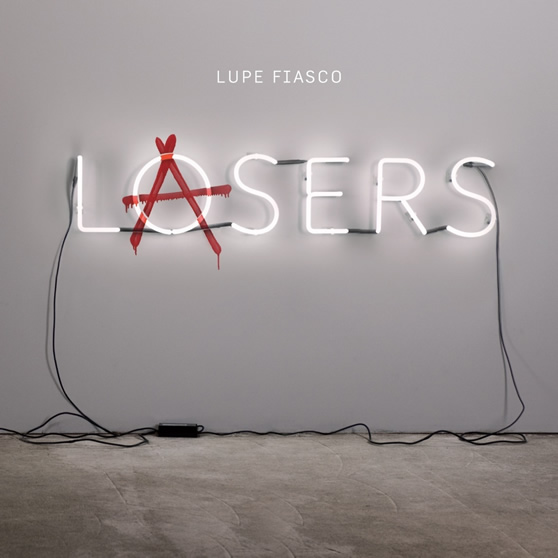 I’m back at it again! It has been awhile since I have reviewed an album, the first quarter is always kind of dry. Now I’m back at it reviewing one of the most anticipated albums of the year.

Lupe Fiasco is easily one of the most introspective artists in our day, maybe even all time. He has put out two albums that are critically acclaimed, while finding ways to keep his music charted with hits like “Kick, Push”. Even with that being said, the recession of record sales has effected the Chi town emcee as well. With Atlantic Records unsure if Lupe could sell in this day of “Gold being Platinum”, his album was shelved for almost four years. Lupe proved he has an undeniable fan following though, as people protested the album being shelved, and ultimately we have been given a release date for Lupe’s next album. He managed to keep his name buzzing with threats of retirement, and even “beefing” with everyone’s favorite former teeny bopper, Soulja Boy. Anyways we have waited for almost four years for this album so I won’t make you wait any longer lets get into the music.

1. Letting Go
Featuring Sarah Green; Produced by King David
Lupe starts off the album rhyming over a sultry beat. The topic matter is interesting, he speaks on being tormented a lot. This isn’t how I expected the album to start. He seems conflicted on this song. The end of the song finds Lupe reflecting on his time in the industry.

Tired of all the wardrobe changing/Playing all these extra roles/Filled with all these different spirits/Living off these separate souls/This sounds like a song I expected to hear on LupE.N.D. It is an interesting way to start off the album.

2. Words I Never Said
Featuring Skylar Grey; Produced by Alex Da Kid
Political rap at its best. The first line really catches your attention, ” I really think the war on terror is a bunch of bullshit”. Although I don’t agree with everything he spoke on for this joint, but I respect the fact he decided to speak on his political views. He also spoke on the people in power who refuse to speak on these matters, “Just listening to Pac/Isn’t goning to make it stop” and “I think all the silence/Is worse than all the violence”.

3. Till I Get There
Produced by Needlz
You will notice that the production on this album isn’t the norm for Lupe and this song is a prime example of that. This sounds like something the radio would eat up. The hook is also very radio friendly and I would be willing to bet this is going to be a single. Luckily Lupe doesn’t disappointing with the actual verses. He starts off with “Album on hold/The whole world on hold”. I can’t remember the last time a rapper described how he felt during an album being shelved so well. The first verse describes how Lupe felt.

4. I Don’t Wanna Care Right Now
Featuring MDMA; Produced by The Audibles
Not feeling this one. The production throws it off completely. Lupe also used a “stutter” flow through a good portion of the song. Some people will like this, but for me it is a SKIP! This is more will.i.am than Lupe.

5. Out Of My Head
Featuring Trey Songz; Produced by Miykal Snoddy
Trey Songz on the album? I wonder what this is about? Of course this is dedicated to the women. Lupe goes in on the verses about being smitten over a young woman while Trey kills the hook. There isn’t really any surprise here.

6. The Show Goes On
Produced by Kane Beatz
The first single off of the album. Before this came out I thought Lasers would end up like Detox. The song had to grow on me a little bit; at first I wasn’t really feeling it that much. The message in the song is really dope though:

Say Hip-Hop only destroy, tell ’em look at me, boy/ I hope your son don’t have a gun and never be a D-boy

I never really considered Lupe to be a tormented artist, but this is the second song on the album where I get that vibe. In the second verse he even sounds like he has contemplated suicide (At least to a small degree). The production on this song isn’t nearly as poppy as the songs before. It has some real grit to it.

8. Coming Up
Featuring MDMA; Produced by King David
This song has the album back track to the poppy production. This is a feel good song. Lupe is expressing the idea that no matter how hard things are or have been, there is a chance to make your life better. This is a good topic, but the poppy beat turns me off from it.

9. State Run Radio
Featuring Matt Mahaffey; Produced by King David
Here Lupe speaks his mind on the problems with the radio stations. He has a problem with radio stations not speaking on important world topics, every rapper having to make radio friendly music to survive. I find the latter ironic because the majority of the album has a radio friendly vibe. Not feeling it.

10. Break The Chain
Featuring Eric Turner & Sway; Produced by Ishi
This beat sounds extremely familiar but I couldn’t find out if there was any sample on it. Still sounds different from the rest of the album. This is more of what I expected the album to sound like. The song is about change. We are all prisoners to our habits our desires, and sometimes the actions of those who influence us. It takes strength to break those chains, at least that’s what I got out of this song.

11. All Black Everything
Produced by The Buchanans
This is a concept song. It questions how would the world be if Africans would never have been enslaved. It is okay.

12. Never Forget You
Featuring John Legend; Produced by Jerry Duplessis, Syience, & Arden Altino
This is a nice slow beat, and it ends the album on a high note. John Legend kills the hook while Lupe is reflecting on his life.

Everything cherished, remembered in my heart/So you will never perish, you will never part/I tell ’em all about you, drummin’ in the park/We put you in the ground, but I see you in the stars/Go’n, take a bow, a round of applause/The best that ever, always ready we are/Love always shines, that’s how I’ll find you/In case you forgot, I hope this reminds you

Bottom Line:
We all know that Lupe is an amazing lyricist. He can make a dope song in his sleep, but on this album he tried to do something a little different. Most of his beats sounded very poppy. Although the idea of putting deep lyrics on top of beats that radio stations would eat up is interesting but it doesn’t fit. I feel that this is a step backwards. this album sounded forced a lot. Shout out to B-Easy, this album was kind of hard to listen to at times, and is one of the hardest reviews I have had thus far. B reviewed The Cool, and although I feel that album is better than Lasers, I couldn’t imagine having to review a 20 song album by Lupe is a lot. I know I am going to get a lot of hate for this.