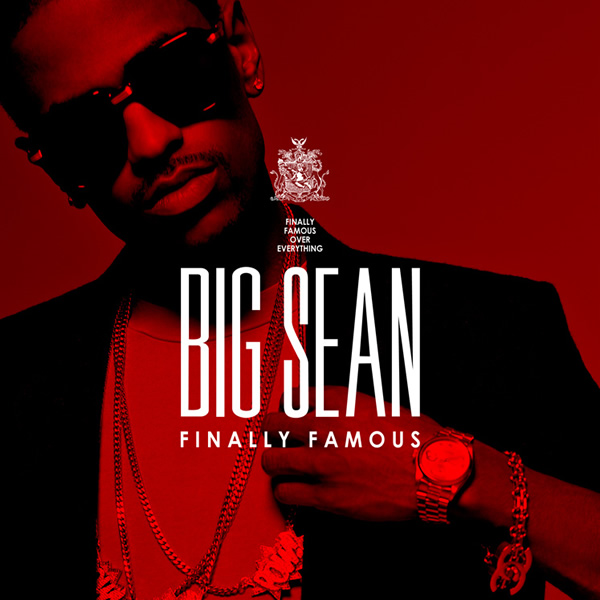 Most of us have probably already heard the story. A few years ago Big Sean was just a small time battle rapper living in Detroit, taking on other MCs at Hot 102.7. It was when Kanye West stopped by that Sean took the opportunity to approach the superstar. Kanye gave him about 60 seconds to rap for him as he was leaving the station. So impressed by Sean’s skills he listened to him for about 10 minutes and eventually signed him to G.O.O.D. Music.

Not wasting anytime Sean has released three mixtapes in the Finally Famous series. Now, after years of waiting, comes Finally Famous: The Album. Let’s see how Big Sean do it…

1. Intro
Produced by Kevin Randolph & Key Wane
A short one minute introduction with Sean switching between semi-singing and rapping. No heavy bass, just a piano and some violins.

Never made the crowd fans/I made them all fam.

A great way to start the album.

2. I Do It
Produced by No I.D. & The Legendary Traxster
No I.D. and The Legendary Traxster provide a trippy, bugged out beat for Sean’s second single. The beat is sporadic but that doesn’t stop Sean from laying down a killer flow on it. If you’ve heard Big Sean’s music before, you can imagine that this song is full of clever big headed lines.

3. My Last
Featuring Chris Brown; Produced by No I.D.
I was really surprised to find out that No I.D. produced this track. I mean, I suppose I could hear this track being used for Graduation but I think I’m used to the No I.D. with Common Sense. The beat is great though and you’ll have to admit it, love him or hate him Chris Brown’s vocals contribute to the track. Big Sean celebrates the fruits of his labors. The perfect song to party to.

4. Don’t Tell Me You Love Me
Produced by No I.D.
Again No I.D. provides an amazing beat with an epic 1 minute build up at the start. Big Sean opens up about the falls of love. It’s cool to know there’s at least one song on the album that isn’t all boasting. It’s all about the decision to either stick with her or leave her. The struggle of a playa that falls in love.

5. Wait For Me
Featuring Lupe Fiasco; Produced by No I.D. & Exile
You can defiantly see Kanye’s influence on Sean here. Touching on the casualties of tour, the strain put on relationships from being far away, the temptation of cheating and briefly talking about the pitfalls of ‘hood life,

But as always Mr. Fiasco steals the show.

–Lupe Fiasco–
Alarm clock said I’m too late
And they said I’m too weak
I could use a few weights
So they said I took too long
And don’t look too strong
Well how long would you take
Waitin’s got me here in the first place
Another second maybe second
Maybe third in the worst case
Now we’ll display
On my word plays
Moving weight
It’s such a trap
Move and weight
You can’t do that
I know I’m dope man
But I can’t move crack
And is such a fraction
They way you thinking about your plans
But I tryna bring it back
Before your brain hit the pan
Sean from Detroit
Lupe from Chicago land
But both of our chains say made in Japan
German engineers design both of the sedans
Ride with Mr. Right on time
Or stay Miss another chance, man
Re-direct it at the girls
Not an ultimatum
Just an option in this world
But things come and go
When the clocks never stop
Be on time for nothing
A little late for a lot

Plus anyone noticed lately Lupe has been getting on really good songs that should have been on his album?

6. Marvin & Chardonnay
Featuring Kanye West & Roscoe Dash; Produced by Pop Wansel & Mike Dean
This is kind of like an amped version of “Slow Jams”. Like I said before you can really hear Sean channeling Kanye’s style here and making it his own without biting. As far as lyrics are concerned, there won’t be any debate on “who killed it”. But the beat is first class and there are some funny lines. Such as:

–Kanye West–
She so cool, get head with her shades on
You should just go and throw a cape on

This is the kind of Hip-Pop I like to hear. It’s great, honest and not forced.

7. Dance (A$$)
Produced by Da Internz
“Can’t Touch This” by MC Hammer (Or should I say “Super Freak” by Rick James?) is still getting reworked for current songs in 2011. Amazing. Anyway the beat and hook will probably have you laughing. This song could have probably been left off the album.

8. Get It (DT)
Featuring Pharrell; Produced by The Neptunes
Big Sean teams up with The Neptunes for probably the biggest hustler’s anthem of the year (Not counting whatever else Rick Ross brings out this year). With Pharrell crooning on the hook, leaving Sean to hold down the verses with slick lines like:

9. Memories (Part II)
Featuring John Legend; Produced by No I.D.
As most rappers do when they feature John Legend on a track, they open up in their lyrics (Think T.I. on “Slide Show“). Sean really comes clean with some touching personal stories about a friend being addicted to drugs, losing a friend to a car accident, the frustrations of trying to make it in the music industry, and his first encounter with Kanye. Hopefully this one ends up on the airwaves.

10. High
Featuring Wiz Khalifa & Chiddy Bang; Produced by Xaphoon Jones
Time for some odes to the chronic on some spaced out production (What else did you expect with Wiz on the track?). Sean puts in work for his verse and really shows off his skill. Wiz does his regular thing. Chiddy’s flow on the last verse is amazing. Sean does kind of get lost in the mix but still a good track.

11. Live This Life
Featuring The-Dream; Produced by No I.D.
This sounds very similar “My Last”. Big R&B singer on the hook, rapping about the lavish life. Not saying it’s a bad track but it does sound like we’ve
already heard it on this album. Kind of sounds like a Dream track featuring Big Sean.

12. So Much More
Produced by No I.D.
I guess No I.D. used up all the sped up soul samples before Mr. West could get a chance to put any on this album. It’s a good look to finish the album off without a feature. Basically what’s being said here is “If you didn’t believe me…fuck you! I made it”. Reminds me of “Last Call” off The College Dropout. A good track to finish things off.

Bottom line:
Sean’s style is defiantly Kanye inspired but he manages to take it and mix it with his own style and come off with a good formula. Though “Dance (A$$) could have been replaced with the bonus cut “Celebrity“ to make the album sound more rounded. Also it would have been good to hear a Kanye beat on here.

Another thing that should have happened was a hook-less, lyrical onslaught from Sean to please his mixtape followers.

Even though Big Sean does keep it real and opens up to his audience, overall this album is a festivity of women, fun, life and of course success. It’s a celebration bitches!