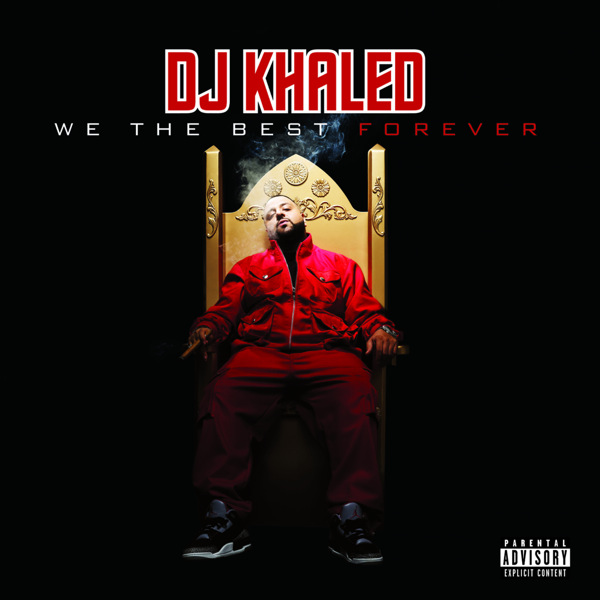 DJ Khaled is one of those figures in Hip-Hop that people either really like or really hate; you’ll either applaud his loud ad-libs or either shake you head when you hear them. But either way, Khaled made a career out of being able to gather some of the hottest rappers and then make highly successful songs. On his 5th album, Khaled (Now signed with Cash Money Records) is set to keep the hoods and clubs flooded with street anthems. Here’s We The Best Forever.

1. I’m On One
Featuring Drake, Rick Ross, & Lil’ Wayne; Produced by T-Minus, 40, & Kromatik
The album starts out with what is probably the song of the summer (As well as one of the top songs of the year). Then again, you put three of the top rappers in the game on the same track, it’s a good chance you will come away with a hit. A lot of props goes to the beat as well; the vibe is mellow and aggressive at the same time so it fits in a lot of places. Besides popularizing another Hip-Hop term, Khaled has already recieved a Gold plaque for “I’m On One”. People obviously like/love this song.

2. Welcome To My Hood
Featuring Rick Ross, Plies, Lil’ Wayne, & T-Pain; Produced by The Renegades, The Nasty Beatmakers, & DJ Khaled
Khaled has started out by giving you two of his current hits right up front (He has Weezy & Ross on back to back tracks too). If this songs sounds like something Khaled has already released, it’s no mistake; “Welcome To My Hood” is the unsaid sequel to “I’m So Hood”. And just like “I’m So Hood”, this track is another bona fide hood anthem and does what it’s suppose to. This song also has Plies delivering my favorite ignorant line of the year:

I need that on a shirt ASAP.

3. Money
Featuring Young Jeezy & Ludacris; Produced by Lex Luger
This may be one of the few songs off the album that wasn’t made to be a radio single. As the title would signal, this song is about money. Lex Luger brings his signature sound (While not sounding so similar this time) as Ludacris & Jeezy each give a serviceable verses. While Young Jeezy also has chorus duties that’ll have you thinking of the Snowman of old, the song as a whole is average.

4. I’m Thuggin’
Featuring Waka Flocka Flame & Ace Hood; Produced by Lex Luger
Lex Luger is on the boards again here. Say what you will, him and Waka Flocka have a chemistry that usually produces music that will get somebody stomped out at the club (aka “Fuck the club up music”). As soon as you hear Waka on hook (He doesn’t do a verse here), you can actually hear the police shutting down your local hole in the wall. Ace handles the verses here and makes sure keeps the aggression going. Mean mug music.

5. It Aint Over Til It’s Over
Featuring Mary J. Blige, Fabolous, & Jadakiss; Produced by Infinity
Mary J. Blige is on her My Life 2 mode here as this is basically her song with Fab rapping at the beginning and Jada in the middle. It also samples a classic Hip-Hop song (“PSK, What Does It Mean?”). It’s funny, this track reminds me of another track that Mary did on another compilation for another DJ (DJ Clue’s “Back 2 Life 2001”). It’s an okay song and everybody here sounds good, but it does sound a little dated; Puff Daddy ad-libs would have been at home here.

6. Legendary
Featuring Chris Brown, Keyshia Cole, & Ne-Yo; Produced by The Nasty Beatmakers & DJ Khaled
On paper, this is a stacked deck in terms of R&B singers. That may be the problem for me because it sounds jumbled. It’s like they had to find places for everybody to go instead of just creating a good song. It’s not bad as I’m sure people will like it. But just not the Grammy award winning song that Khaled has been predicting. Now I’m not a specialist in reviewing R&B music (I leaved that up to Soulections.), but for some reason this sounds like it’s suppose to be on a movie soundtrack (If that makes any sense).

7. Sleep When I’m Gone
Featuring Busta Rhymes, Cee-Lo, & The Game; Produced by Danja
Here we have Busta & Game doing the rapping while Cee-Lo does the hook singing. I would have preferred to hear Ceel-Lo over a more soulful beat, but the end results delivers in it’s own way. Both Game and Busta sound good talking about their hustles over a synth and piano heavy beat. Even though Khaled didn’t have a hand in producing this track, it has his signature sound all over it.

8. Can’t Stop
Featuring Birdman & T-Pain; Produced by Boi-1da & Matthew Burnett
It may have “featuring Birdman & T-Pain”, but in all fairness this is a “#1 Stunna” solo track featuring T-Pain. And that’s where the trouble begins; this shoud have had more rappers featured on it to help flesh it out more. Birdman elementary rhymes and delivery fall flat here. T-Pain also has trouble as his Auto-Tuning seems to be too much for this type of beat. Almost a skip button sighting here.

9. Future
Featuring Ace Hood, Meek Mill, Wale, Vado, & Big Sean; Produced by Boi-1da
As Khaled says in the beginning, this track is for the newer rappers that may be the top dogs years from now (“This the future. They getting money. They making hit records”). No hook, just all the participants providing a verse. And while the verses aren’t particularly quotable, they work with the premise. The Boi-1da beat here is much better than his contribution from the previous track.

10. My Life
Featuring Akon & B.o.B.; Produced by The Team
If you one of those people that immediately get sick to your stomach when you hear Akon say “Konvict Muzik!”, you may wanna skip this one. For those that don’t mind stuff like that, this is a definitive Akon track. Bobby Ray does a verse in beginning that goes with the theme, but yea, this is an Akon track.

11. A Million Lights
Featuring Tyga, Cory Gunz, Mack Maine, Jae Millz, & Kevin Rudolf; Produced by The Runners & The Monarch
Being that this is Khaled’s first album on Cash Money, you knew a posse cut with his label-mates was probably in the cards. This track has the “B-team” of YMCMB over an 80’s pop influenced track. When the track starts, you can see what the producers may have been going for. But as the song goes on, it kinda drags on. It’s good to hear the lesser known label members, this feel like album filler.

12. Welcome To My Hood (Remix)
Featuring Ludacris, T-Pain, Busta Rhymes, Twista, Mavado, Birdman, Ace Hood, Fat Joe, Jadakiss, Bun B, The Game, & Waka Flocka Flame; Produced by The Renegades, The Nasty Beatmakers
The mega-remix of “Welcome to My Hood”. Khaled has done this before a few times before. You see the names, you know what to expect. Oh yea, and Khaled raps on this track. Yea, that happened. Again.

Bottom Line:
On most of these tracks, you can tell Khaled was clearly trying to make hits. While this isn’t necessarily a bad thing, it does hurt the cohesiveness of the album. But to be honest, this is a hard thing to do when dealing with compilations and I sure Khaled wasn’t going for that anyway. We The Best Forever ends up will an album that’s almost filled will tracks made for the radio, the club, and the background of sports highlight packages.

But here’s the problem, I’ll most likely keep maybe 3 of the 12 twelve tracks off We The Best Forever. And while the tracks here aren’t terrible, the one not named “I’m On One” or “Welcome To My Hood” will probably be forgotten pretty quickly.

Sidenote: I wouldn’t be surprised if “It Ain’t Over Til It’s Over” or “Legendary” turn out to be hits. They still wouldn’t be songs that I would play.