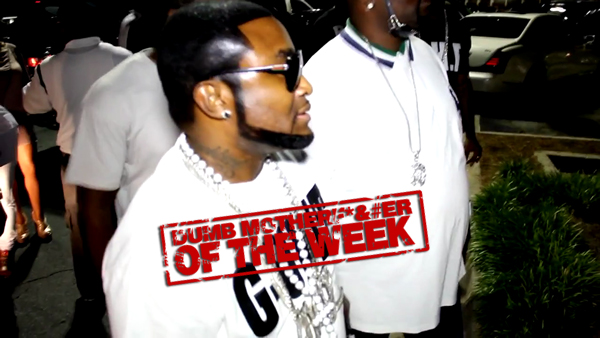 I was minding my own business the other day just going through my Google Reader. For some reason, I decided to click on a video that included Shawty LO, 2 Chainz, & Royce Reed from The Basketball Wives all hanging at The Velvet Room in Atlanta (I’m guessing this because I didn’t get that far into the video).

Around the 10 second mark of the video is when Shawty LO makes an appearance and everything goes bad (Captured in the picture above).

Do you see this mess?

King Jerm explained that the hairstyle Carlos is rocking here is called a “Big Ben” or a “Hollywood” and that it may have started in Philly years ago. You know what I call it? Bullshit. I mean, do you go to a barber or just buy a Sharpie for this shit? I seen dudes around Atlanta with just the hairline done (The “Steve Harvey”. Which is bad enough) but the whole head? And beard?

This shit has got me mad at a few people:

So here, we dust off the Dumb MotherFucker of the Week Award and present it to Shawty LO’s hairstyle. Enjoy it Carlos’ hairstyle, you’ve earned it.