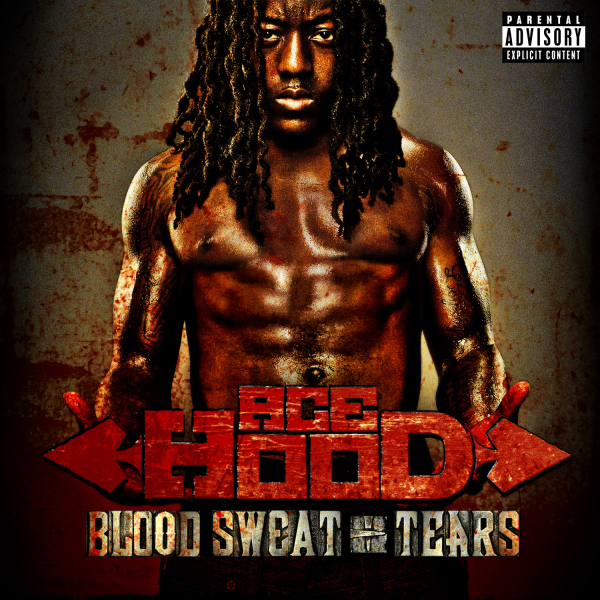 I’d like to know, how you get backed by one of the recognizable voices and ad-libs in the game (“We Da Behst!”) and still doesn’t get an album that goes even Gold? I think one of those missteps was dropping his second album less than a year after his debut which also means that the promotion for the first album was cut off too soon. Well, assuming that I’m remotely right, let’s say maybe he’s learned from the “mistake”. This album comes 2 years later and his absence hopefully means better, deeper, fresher material. The title Blood, Sweat & Tears coaxes us to think the same thing as well.

1. King Of The Streets
Featuring T-Pain; Produced by YoungFyre
Man, this song picks up feeling like he hasn’t lost a step since his last album. This is the kind of music that I really like from Ace Hood and I’m glad to hear it open the album…no tricks, no capes, no cups, just game. Dude is currently one of the dopest street rappers in the game right now and high energy, braggart, confident, and intense songs like this one is why I think that. T-Pain pain teams up with Ace once again and gives us another great anthem.

2. Go N Get It
Produced by Lex Luger
I had to look at this track title again because it sounds so much like “Hustle Hard” that I thought it was like part 2 or something. I’ll just take it as that because just as the title suggests, the subject-matter isn’t much different either.

Anotha day, anotha dolla
Every 24 I’m thinkin’ money and the power
Bills due
Money runnin low
Plus my cousin lost her mind and had an overdose
Way too many problems
Got me stressed out
What’chu do when you got  7 days to move out

Sure, the motivation is different, but this song is still about hustlin’. Not that that’s a bad thing.

3. Errythang
Featuring Yo Gotti; Produced by Schife & The Lottery
I guess in theory this song is different…but I’ll be damned if I don’t feel like I just listened to this song. Sure, the track is different, but his cadence, the elements, and even the tempo are pretty much identical to the last track and thus, “Hustle Hard”. It’s almost annoying how much this song sounds like the others. Moving right along, this song is also about hustlin’ but more importantly about not losing focus and let trying to get ass derail your plans. Sound advice, you NEVER lose chicks chasin’ money, but you’ll def lose money chasin’ chicks.

4. Hustle Hard
Produced by Lex Luger
What can be said about this song that hasn’t been said. I’d call this vintage Ace Hood right here, but when combined with crazy saturation and what seemed like two watered down versions before it, I’m almost over this song…and as it falls on this album, I’m definitely over it right now. I just heard this song 3 times in a row.

5. Body 2 Body
Featuring Chris Brown; Produced by J.U.S.T.I.C.E. League
Ace Hood is one of the few cats that makes slow jams for the ladies that I can dig. I think it was a great move to put this out as a single to balance “Hustle Hard” as well as put it here on the album. Like I said, and I hope this is the last time I have to say this until the Bottom Line, tracks 2-4 are almost carbon copies and this song really helps break that up. Aside from some lyrical slip ups, this song is pretty chill. I didn’t even know J.U.S.T.I.C.E. League did the beat for this joint before I bought it, but I’m not shocked, they make some dope tracks.

6. Memory Lane
Featuring Kevin Cossum; Produced by Sonny Digital
I have high hopes for Kevin Cossum. He’s being brought up like the way they used to break new artists back in the day. Writing credits, guest spot, then features, eventually, when they drop the first solo joint, we already know who the person is and we’re looking for it. Kudos to your management over at N.A.R.S./JIVE Records. More thankfully, this track is different yet again, so it appears the run is over. Sonny Digital provided a really well done and interesting track for this one where hood raps about his lost homie and tight inner circles. This is a really solid song and from what I see on Twitter, this one resonated instantly with folks when they heard it. We may see this as the next single just because the streets demand it.

7. Letter To My Ex’s
Produced by Cardiak Beats
This song may unite men across the nation. I’m partially joking but man, we have all had a bad ex…or 3. And no matter how different your personal backstory is in comparison, the bottom line is usually the same…she wasn’t sh*t. This song is also for those cats that say, like Ace does on this album, it ain’t trickin’ if you got it. The story paints the picture that says that even if you’re trickin’, you may still end up being tricked at the end. Musically, Cardiak beefs up some tough drum work with a nice loop of keys. These aren’t keys you hear programmed in Fruity Loops, these keys sound real (I can only hope right).

8. Beautiful
Featuring Kevin Cossum; Produced by The Runners
I don’t think I’ve pointed this out during the review so I’ll do it now, Ace Hood is pretty talented at telling a story and painting a picture. Backed by a fly ass track by The Runners (Well, canned drums aside) this song really has a late 90’s feel to it. Good R&B sensibilities and vibe make this one a favorite on the album. Earlier on the album we heard him talk about women who did him wrong , warnings to stay away from the chase, and even flat out spoiling the one you care about. This time, he comes back with a track about just appreciating your regular around the way chick for her own beauty.

9. Lord Knows
Produced by The Renegades
I think this song single-handedly made him a trending topic on release day. Where “Memory Lane” has folks going crazy, this song may have them crying and going to church. I’ve listened to all his music, and this one really stands out as one  of his most raw and real work period. I think if I go back and listen to his material right now, this one would probably prove itself to be that defining song for him. It doesn’t hurt at all that The Renegades draped the keys and tear jerking elements throughout the track to give it the emotion it  deserved.

10. Bitter World
Produced by The Lottery
So, this is probably the first track I really don’t like. While there were some familiar songs earlier in the album I didn’t dislike the tracks themselves, but this one, I don’t like. It feels really heavy and even though the topic isn’t about roses and good feelings, the track itself drags down the album. It’s an agonizing tone that doesn’t help the lyrics, but takes away from them. I’m also tired of the programmed drum tracks and high hats, so this doesn’t move me musically. I can fux with the lyrics, but I need them on another track. Don’t let me deter you though, he talks about growing up without his dad, the work of his mom, his determination, and even his kids. It’s an interesting quick trip through Ace Hoods life and hopefully a message that doesn’t fall on deaf ears out there.

11. Spoke To My Momma
Produced by Cardiak Beats
Aite Cardiak Beats, I’m lookin’ for more of your music. He has a really nice feel for the keys and how to build a track. Even when using digital instruments, he has a intriguing understanding of musical landscape in a song. The thing I like about the track most is how the songs is basically a wave. It starts out stripped down, builds to a crescendo, slowly strips back down to the simple elements, then repeats the process for the entire song. It’s that production coupled with more heartfelt lyrics that make this my personal favorite on the song.

12. Hustle Hard (Remix)
Featuring Rick Ross & Lil’ Wayne; Produced by Lex Luger
I prefer the original as my stance is how is it a remix if you just add verses? New beat AND verses that’s a remix, but I digress. Ross’ barking/grunts are like epic build ups these days and we all know what he does on this track, dopeness. Weezy continues being hit or miss for me…that’s pretty much how I feel about his rapping largely so this is just another appearance to add to the debate. THIS should have been an iTunes single or bonus song instead of “Tear Da Roof Off”, “I Know”, or “Real Big”.

Bottom Line:
I’m going to piss some people off, and that seems to be pretty typical when I post up some stuff nowadays so let me get to doing what I do. I equate Ace Hood to Scarface…hear me out. They both have the knack for spitting some dope rhymes without being overly wordy or complicated for no reason. They don’t rap like they just got a hold of a thesaurus nor do they stretch words out and mispronounce things just to make them fit. These cats spit straight, deliberate, understandable coherent rhymes that make up for the lack of lyrical dexterity with energy and delivery. One of the things that’s been said about Ace on previous reviews is that he’s a one trick pony. Thuggary and spending are his vices. I don’t think he’s a one trick pony at all and I don’t know that anyone can refute that lyrically on this album. That said and comparison to legends aside, he simply went to the well one too many times musically for me on this album. I’ve mentioned this like 20 times this review alone, but having so many (5) songs on an album with the same beat/tempo really makes the album stumble out the gate. Fortunately he has some great content here, especially with the bonus songs that try to make up for that.  Look, I gave Rick Ross a 3.5 for this so I can’t give Ace a higher score when he did the same thing. I DO enjoy this album more than that one though and it will immediately go into rotation, especially in my gym rotation. This is definitely crafted for that and appropriately named.