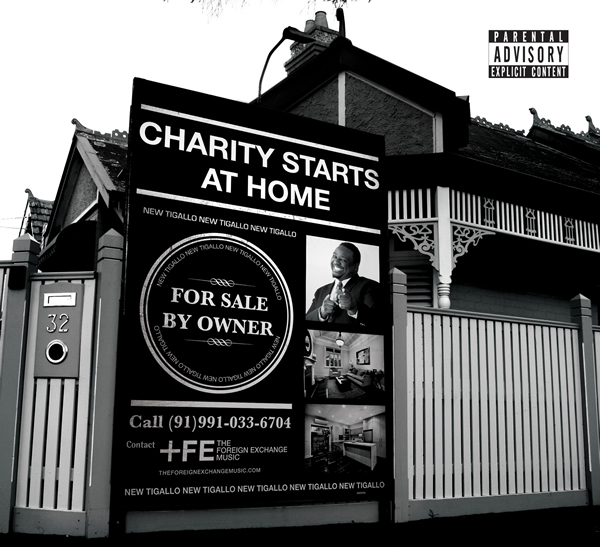 Sidenote: First and foremost I want to apologize for how late this is hitting the site. I am normally much quicker with my reviews, but unfortunately sometimes my life interrupts my passion for all things Hip Hop.

Phonte is maybe one of the most under appreciated Hip-Hop artist that we have. It surprised me that one Hip-Hop website (Although they know nothing about the culture) said something to the effect of “Hip Hop new comer Phonte is set to drop his first album”. It hit me that many people haven’t been as familiar with Phonte as they should be. Allow me to give Phonte a short introduction before we get into the review. Phonte is most well known for his days in the now estranged group, Little Brother. The group consisted of Phonte, Big Pooh, and 9th Wonder. Together they put out 4 albums, a few mixtapes and considered by many one of Hip-Hop’s most respected “underground” groups of this era. As if this isn’t enough the man often referred to as Tigallo is also a part of the Hip-Hop/electric R&B group known as The Foreign Exchange. His influences can be heard in Drake’s critically acclaimed mixtape Comeback Season. He has even gone on to dedicate his BMI award to the already legendary Emcee (Although Phonte would be happier with a collaboration). Yes! This is Phonte’s first album, but don’t believe that he is a newcomer.

When I first found out that the release date for Phonte’s Charity Starts At Home album was dropping on the 27th of September, I began to get giddy. It had already been announced that J. Cole’s album, 9th Wonder’s album, & Big K.R.I.T.’s album (K.R.I.T.’s album was later pushed back) were all dropping that day. I felt like this would be a great day for Hip-Hop. I actually bet my friend that Phonte would put out an ablum just as good, and maybe even the best of that day. The J. Cole album and 9th Wonder albums have already been reviewed, so let’s take a look at how the first solo album from Tigallo is.

1. Dance in the Reign
Featuring Sy Smith; Produced by Swiff D
The first thing you hear when the song starts is a voice that made me think nappyafro’s own Saule Wright was given the opportunity to introduce Phonte. This is a great start to the album as Phonte introduces people to who he really is. Tigallo does a great job showing people that he isn’t your average rapper. Through this first song he paints the picture that he lives a real life, and Rap is his passion. Instead of painting a picture that he is a star, he paints one that allows you to feel he could be your neighbor. The production sets up the rest of the album perfectly.

2. The Good Fight
Produced by 9th Wonder
This is one of the realest joints that I have heard. He is rapping about the everyday man and the struggles that he faces in today’s economy. Phonte holds absolutely no punches with lines like, “5 dollar gas and poverty rates, are rising much faster than your hourly rate”. The production sounds like some classic Little Brother joint. Great song.

3. Everything Is Falling Down
Featuring Jeanne Jolly; Produced by Khrysis
First thing I noticed was that he gave a shout out to Fashawn. This song is about stress. We have all had that feeling like everything we have worked for is falling around you. Phonte takes an amazing beat to deliver that raw emotion on record. Great Track.

4. Not Here Anymore
Featuring Elzhi; Produced by 9th Wonder
“I don’t need the lime light, that’s young nigga shit.” That line right there almost completely describes Tigallo. Even to this point he has stayed true to himself 100% and on this track 9th gives Phonte another track to spit that real world type of music. Elizhi brings in a nice verse too.

5. Eternally
Featuring Median; Produced by 9th Wonder
Median and Tigallo go back in fourth on this track the entire time. So far this is the weakest track to me. I have never been a fan of this format for two emcees on a mic. Either way it isn’t a skip but nothing really memorable, except that Phonte shouts out Lil’ B towards the end.

6. Sendin’ My Love
Produced by Stro Elliot
This is some real relationship type shit. Phonte explains the urge that all man have to sew their oats. He also speaks on the reason for hunting other women verses the desire to keep the good woman that you already have. This is another dope track. Production is amazingly simple, but it does its job perfectly. 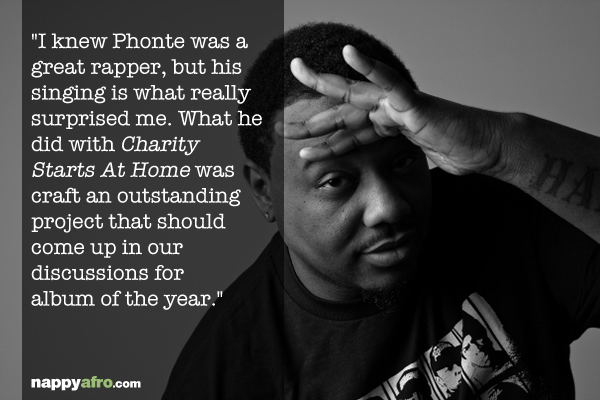 7. Ball And Chain
Produced by Swiff D
When I first heard this, I thought Jamie Foxx was on the vocals. It took awhile for me to figure out that this was Phonte. I definitely see why Drake is such a big fan. Anyway I expected this song to be about a significant other. Like the wife is my “Ball And Chain” and well, it is exactly that. This is about a woman who is too smothering. I can relate. Phonte takes two verses to sing and the final to drop a nice verse. This probably could be a great radio single.

8. To Be Yours
Produced by Zo! & Phonte
I’ve always been a fan of Phonte the rapper, but this track made me want to go find all the Foreign Exchange music I could. This is something I know the ladies will love.

9. Gonna Be A Beautiful Night
Featuring Carlitta Durand; Produced by S1
Phonte stays on his R&B stuff. This is a romantic track about a perfect type of date. The first verse has Phonte singing about how he feels about a young lady, then the second has Carlitta Durand doing the same. The last verse is Tigallo rhyming.

10. We Go Off
Featuring Pharoahe Monch, Produced by Fatin “10” Horton
For those of you who hate when rappers sing, don’t trip Te’ brings it back with hard beat to rap over. This is a lyrical slugfest and who better to spar with than Monch? Still Tigallo got him on this one.

11. The Life of Kings
Featuring Evidence & Big K.R.I.T.; Produced by 9th Wonder
If we do another FROCAST with music and I finally get to pick the tunes, this will definitely be one of the tracks on it. This is great music right here. Someone the other day said K.R.I.T. is like ketchup, he just makes everything better.

12. Who Loves You More
Featuring Eric Roberson; Produced by E. Jones
This is another great song. It is sort of reminiscent to J. Cole’s “Never Told” subject matter wise. This is the perfect way to end his album.

Bottom Line:
Like I said earlier, I knew Phonte was a great rapper, but his singing is what really surprised me. What he did with Charity Starts At Home was craft an outstanding project that should come up in our discussions for album of the year. There are plenty of Emcees who claim that they could sell records if they decided they wanted that, but hearing Phonte here, I believe he really could. But obviously Phonte is in love with the art more than he is the fame. He is humorous, smart, witty, and intelligent. These qualities just flow through this album. Outside of me not really liking one song off of here the album is almost flawless.
Sidenote: If I could give this a 4.25 I would but here in Fro’nation it doesn’t go down like that.