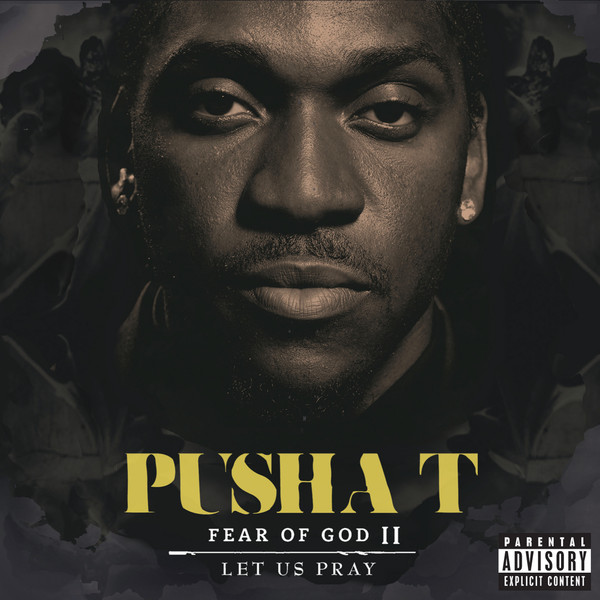 Pusha T messed up. The original Fear Of God had some hits that should’ve been held back for his official debut solo album. Pusha probably knew this too because shortly after releasing that mixtape, he announced that he would be releasing a retail version. After a few delays and a few tracklist changes, we finally get the retail debut of Pusha T’s solo career. Should other rappers have fear in their hearts? Let’s find out…

1. Changing Of The Guards
Featuring Diddy; Produced by Rico Beats
While Pusha T is technically from Virginia, to me he always sounded like he could’ve easily been from New York. So it kinda makes sense that NY’s own Puff Daddy makes an appearance here on the intro (Although when actually listening to the song, Diddy doesn’t do much other than giving an introduction). Over ominous bass, Pusha starts off with his patented drug flow mentioning things like Eddie Kane Jr., beautiful women, & even mentioning the Yale controversy his lyrics caused last year (“I’ll be damned if I let Yale campus vilify”). Good start.

2. Amen
Featuring Kanye West & Young Jeezy; Produced by Shawty Redd
On paper, you’d think that a song with Pusha T AND Kanye West AND Young Jeezy would be a home run right? Nope. First off, the original version of this song only had Jeezy on it and was off his mixtape The Last Laugh. The recycling isn’t a problem but the results sounding like it is. No cohesiveness just an okay Pusha & Yeezy verse tacked on a so-so Jeezy song (It’s a reason why many didn’t recall this song when this version came out). Not terrible but should’ve been so much better.

4. What Dreams Are Made Of
Produced by The VIPs
I’ve said this before, but by being a huge wrestling fan, almost any rapper or producer that incorporates wrestling into their music gets a few points from me. That works well here because honestly this is an average song and it’s the use of legendary Ric Flair promos that makes the track stand out. And what pro wrestler could be matched with Pusha’s rhymes of the good life other than The Nature Boy. Wooooo!

5. Body Work
Featuring Juicy J, Meek Mill, & French Montana; Produced by Rico Beats
Here Pusha assembles a pretty good collection of gutta rappers. But the features here plus the the production, which wouldn’t be identifiable on a Lex Luger beat tape, actually makes it sound like something on a DJ Drama or a DJ Khaled compilation album. Don’t get me wrong, it’s a song that would get most down South clubs bouncing, but it doesn’t sound like it’s Pusha T’s song.

6. Everything That Glitters
Featuring French Montana; Produced by A-Traxx
This track was originally on DJ Drama’s album Third Power and when I first heard it I was like, “Damn, Pusha T should have put this on his shit”. Well, he must have thought the same thing because here it is on Fear Of God II. The story of the everything that glitters isn’t gold is matched here with the grandiose production down to Pusha’s cautious rhymes (“For every brick broke down it’s one stepped on/For every known rat, it’s one slept on”). Most of the time I really don’t enjoy French Montana’s rapping because he sounds really lazy, but here on the hook his style fits well. This is a stand out track.

7. So Obvious
Produced by Bangladesh
If I was to pick a song that I thought was put on this album just to fill it out, it’d be this one. With Pusha just wanting “flip it & sell it” and Bangladesh yelling in the background, there’s nothing here to make it stand out. Even the beat is your standard in today’s dope boy soundtracks. Not a skip but a shrug. 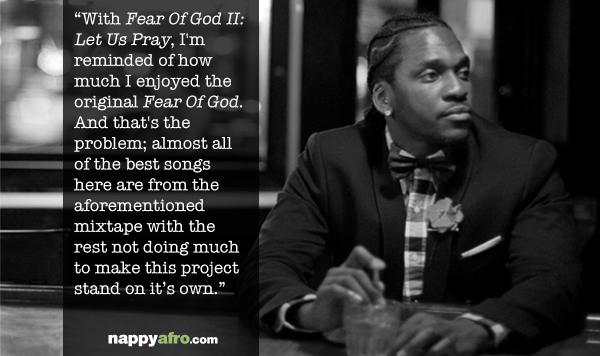 8. Feeling Myself
Featuring Kevin Cossom; Produced by Tha Bizness
When I got paid last week and had a little left over after paying rent, this is the track I played in my car. That’s proof that even broke niggas can stunt to this song. It’s funny because when I initially heard this on the original Fear Of God, I didn’t like it. But damn is that hook infectious. I’m really surprise this didn’t make a bigger splash during warmer weather. This also shows that Pusha T can make a radio ready single. There’s also has a pretty good music video for the song too.

9. Raid
Featuring 50 Cent & Pharrell; Produced by The Neptunes
You remember earlier in the review when I said “Trouble On My Mind” marked the moment when The Neptunes started making good beats again? Well, this may be the second time. It wouldn’t surprise me if this was a beat that Pharrell & Chad kept around from early 2000’s as it sounds like the Neptunes of old. Now I’ll be honest, the combination of styles from 50 Cent & Pusha T is an odd one but it works because all 50 really does is spit a verse a leaves. Pusha predictably sounds much more at home here over this production.

10. My God
Produced by Hit-Boy & Deezy
When I heard that Pusha T had signed with Kanye West’s G.O.O.D. Music, I wasn’t sure if he could hold his own without his brother Malice. “My God” was the song that quickly put those thoughts to rest. The majestic sounding production here was like a anthem for Pusha T announcing himself to the world as a solo artist. And Pusha didn’t let the moment pass him by without saying so:

They’ll be no waiting, I have no patience
This is the end for all my unrecognized greatness
I’m here now, nigga, pardon my lateness
You can hear in every bar and every cadence
It’s the new god flow, ain’t it
The last supper for you niggas now repainted
Take position on the chess board and rearrange it
Face to face with the truth, get reacquainted

11. I Still Wanna
Featuring Rick Ross & Ab-Liva; Produced by Lee Major
Yea, I was hype too seeing two of the best cocaine rappers doing it today, Rick Ross & Pusha T, on the same track. But there are two main reasons this didn’t live up to expectations: First off the beat doesn’t feel worthy and secondly, a hook saying “I still wanna sell kilos!” seems laughable to me. What’s funny is that this heavily reminds me “100 Keys” off Big Sean’s Finally Famous album (It also featured Pusha & Ross and it was also a let down).

12. Alone In Vegas
Produced by Nottz
Like Pusha T says here, Nottz blacked out on this beat; he killed it hands down. This song is the great combination of being bass heavy but still laid back at the same time. This could easily be one of the top beats of 2011 too. And as with most times, you give Pusha good production, he’ll deliver:

Lost some niggas some other niggas double crossed ’em
Tryna snatch my niggas back I blew a small fortune
Wrestle with the work, we was like the four horsemen
Rick Flair with the flame, I’m motherfucking gorgeous
As the gull wing doors lift
Karate Kid, crane kick, no Jaden Smith
Whiter than that coke brush that they paint me with
Sunk leather seats softer than an angel’s kiss
Sidenote: Second time on this album references Ric Flair.

This was the closer on the original Fear Of God, and it makes since that is closing this album to especially with Pusha giving out liner note-like thank you’s at the end of the song. This is my favorite track off the album and the accompanying music video for it makes it even better.

Bottom Line:
When the mixtape Fear Of God originally came out, it got steady play in my iPod and is still on of my favorite mixtapes of 2011. Not only did it show that Pusha T could hold his own as a solo MC, it also showed that he could produce a project full of well crafted music on his own too. With Fear Of God II: Let Us Pray, I’m reminded of how much I enjoyed the original Fear Of God. And that’s the problem; almost all of the best songs here are from the aforementioned mixtape with the rest not doing much to make this project stand on it’s own. Besides the Tyler, the Creator featured “Trouble On My Mind”, it sometimes feels like Pusha may have just slapped some more songs on the the sample cleared portion of Fear Of God for retail purposes only. While thats understandable, it hurt the project as a whole. It’s hard to rate Fear Of God II: Let Us Pray higher than a 3 knowing that Pusha gave away a better project months earlier for free.

All is not lost though. Both versions of Fear Of God show great promise of what Pusha T’s official G.O.O.D. Music debut album has in store when it’s released next year. Until then, download “Trouble On My Mind” and just add it to the original Fear Of God.