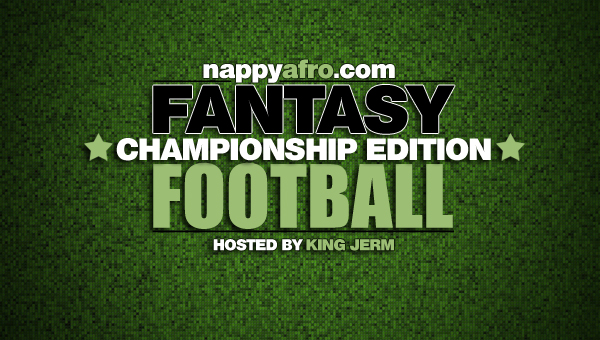 Well the second season of nappyafro’s Fro Fantasy Football League has wrapped up and a new champion has been crowned! Who is the champ? Well, I’m not one to be humble, but I AM THE CHAMPION! That’s right, King Jerm took the crown home this season! As your champion, I promise to wear the crown with dignity! Props go out to everyone that competed this season, especially Spread Jermz who was a heck of a competitor (just not good enough to beat me) who made a MAJOR blunder that cost him the title. Well, not really, but it would have been a lot closer. Enough of me gloating, I have been popping bottles over here all week celebrating. Now its off to the jeweler to see about getting a CHAMPIONSHIP RING!

How do you sit Megatron in the championship? Well Spread Jermz did, and it ended up costing him. Not that Victor Cruz wouldn’t have won it for me anyway, but you NEVER go down with your best players on the bench. I guess you can say that Spread Jermz learned a valuable lesson this season.

Once again, thanks for everybody coming out and making the second season a success! I hope to see all you guys again next year as I try to defend my title!