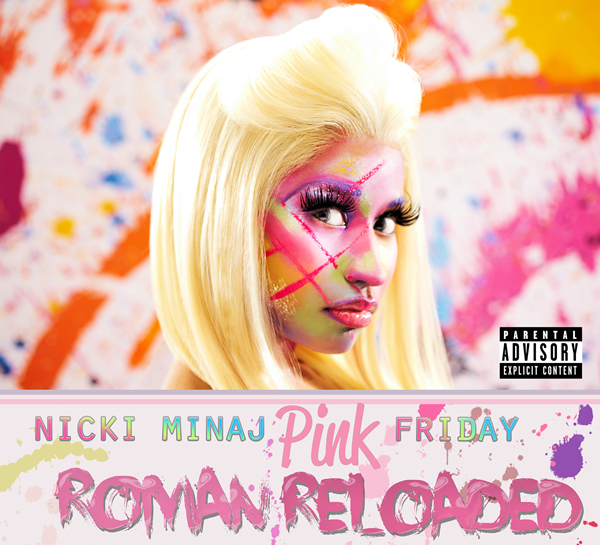 Hip-Hop’s leading lady returns with her second album, off of the strength of a double platinum debut. Nicki Minaj has caught a little heat from critics however. Back in Nicki’s mixtape days we all loved her for raunchy delivery and lyrical ability to keep up with the boys. On the original Pink Friday however, Nicki began to show that she can make pop records, and since then has seemed to lean more towards pop than Hip-Hop. Barbie noticed that, and came into creating this new project with the intent to have this album completely Hip-Hop. Does she create a great Hip-Hop album? Let’s take a closer look.

1. Roman Holiday
Produced by Blackout & Pink Friday Productions
Oh wow! That was the first thing I thought when I heard this track. The production is epileptic, and sounds all over the place. Honestly it fits Nicki’s style on perfectly. Her lyrics are subpar at best on here, but her energy makes up for that. There is a weird moment towards the end, when Nicki starts singing a version of “Come All Ye Faithful”. This does remind me of mixtape Nicki.

2. Come On A Cone
Produced by Hitboy
When I first read the title of this song, I thought this track was going to be on some two girls and one cup type of stuff. Thank goodness I was wrong. The beat is way more subtle than the last. Nicki comes at this track like Nicki back in ’08 would have attacked it. She talks about everything from making money and picking up hoes, even has a few moments in the song where she sings “Put My Dick In Your Face”. It’s not a terrible song, but it isn’t that great either.

3. I Am Your Leader
Featuring Cam’ron & Rick Ross; Produced by Hitboy
Nicki is staying on the Hip-Hop, but honestly hasn’t really said much. This is another Hip-Hop joint featuring everyone’s favorite Hip-Hop heavyweight, Rick Ross. Although Rozay had a nice verse, Killa Cam came in a destroyed this joint. The instrumental is okay and Nicki didn’t have anything memorable except she is still talking about dick, like she has one.

4. Beez In The Trap
Featuring 2 Chainz; Produced by Kenoe
Nicki spits the first verse, dictating game that she would spit to a woman. She has already done this earlier on the album and due to the fact that this is only the fourth song, I’m feeling like she has attacked songs just like this earlier in the project; isn’t a good sign. I’m not the biggest Titty Boy fan, but rhyming alongside an uninspired Nicki Minaj makes him sound like a true lyricist.

5. HOV Lane
Produced by Ryan & Smitty
I read somewhere that this track was supposed to be a dedication to Jay-Z. I don’t hear it at all, and not to mention this is the same feeling that I got from the other tracks so far. She spits on money, big booty strippers, and making haters mad. The production on this track is a standout thus far though.

6. Roman Reloaded
Featuring Lil’ Wayne; Produced by Rico Beats & Pink Friday Productions
Finally! This is what I expect from Nicki Minaj. Some of the bars she dropped on here were crazy, “All these bitches crying, Christopher Bosh” and “You Raggedy Anne’s could never be Barbie bitch”. Wayne came through at the end with an inspired verse as well. So far this is my favorite track on the album.

7. Champion
Featuring Nas, Drake, & Young Jeezy; Produced by T-Minus & Seethram
This is the most anticipated song from the album for me. The song’s production sounds like it would fit better on the first Pink Friday though. This is the first song that sounds like it actually has some direction to it. Although this isn’t hyper active Nicki, it is the most honest and emotional Nicki on the album thus far. Nas, Jeezy, and Drake all come with stories of overcoming hurdles as well. This definitely one of the highlights on the album.

8. Right By My Side
Featuring Chris Brown; Produced by Andrew “Pop” Wansel, Oak, & Flippal23
I knew it was coming, it just took longer than I thought it would. Nicki gets back to the singing with this one. A nice duet with her and Chris Breezy. Although she does rhyme on the end of the track, the last verse sounds more like “feature Nicki” which is a good thing. A dope joint for the ladies. 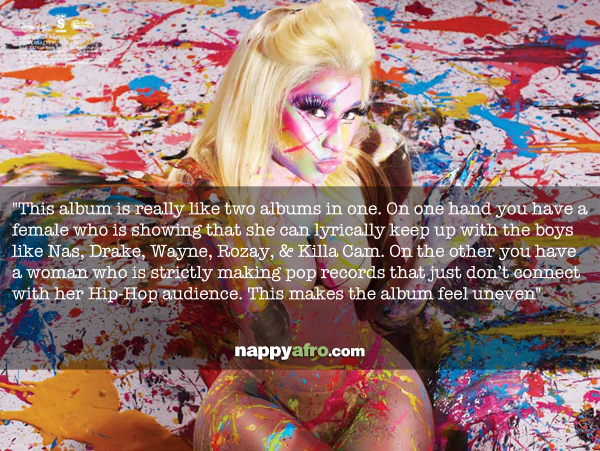 9. Sex In the Lounge
Featuring Lil’ Wayne & Bobby V; Produced by M.E. Productions & Pink Friday Productions
I swear I’ve heard this song or at least this concept from Nicki before. Maybe off of that Young Money Bad Ass Grasshopper mixtape, either way this is definitely a song that could be a single. I’m not really feeling it though; it’s a little predictable.

10. Starships
Produced by RedOne, Rami, & Falk
The first time I heard this, my little sister was listening to it. I said “Turn that wack shit off” she replied, “It’s Nicki Minaj though”. I was shocked that she would go this far. Still this represents a drastic change of direction from the earlier stuff Nicki did on this album. This is where we hear Nicki deviate from Hip-Hop directly to Pop for the majority of the remaining album.

11. Pound The Alarm
Produced by RedOne, Rami, & Falk
This sounds like one of those songs I have to listen to on the radio when my iPod dies. I can’t lie, this is super pop. Skip!!!

12. Whip It
Produced by RedOne & Alex P
The beginning of the song sounds like it has the same production as the last track, just a little quieter. Once her lyrics come in, I feel like I’m listening to Lady Gaga. Not a good song at all.

13. Automatic
Produced by RedOne & Jimmy Joker
Oh My God!!! This is terrible. Nothing about it connects with me. Skip!!!

14. Beautiful Sinner
Produced by Alex da Kid
Well??? Bare with me a little, I’m not a fan of any of her other pop records, but for some reason I think I can deal with this one. It almost reminds me of Brittany Spears stripping at the VMA’s. I can’t say that this is a good song, but I would love to see her perform this live.

15. Marilyn Monroe
Produced by J. R. Rotem & Dreamlab
“Sometimes I’m selfish, Sometimes I feel like Marilyn Monroe” . This song is basically a song dedicated to the fallen model (?). I always thought Marilyn Monroe was the first Kim Kardishian, you know being famous for no real reason, but this song is Nicki comparing her life right now to Marilyn Monroe’s. It is still very poppy.

16. Young Forever
Produced by Dr. Luke & Cirkut
Jay-Z’s “Young Forever”, this is not!!! This is another pop record. This is a song about a boy she liked when she was younger, and how in her mind she would always be that little girl who liked him and they would be young forever. I will never listen to this song again after I turn this review into B-Easy.

17. Fire Burns
Produced by Wansel & Oak
I read somewhere that this song was supposed to be a song about a guy cheating on her and catching an STD. At first I didn’t think so, but now it could be. If you listen to the song like that, it’s pretty entertaining, if not it’s just another pop record.

18. Gun Shot
Featuring Beenie Man; Produced by Kane Beatz
Not only is this a pop record, but I can’t even understand what she is saying. I thought Beenie Man would give me the feeling of listening to music in a different language, but Nicki did that for me. I’ve never been a fan of music where I need a translator to listen to.

19. Stupid Hoe
Produced by DJ Diamond Kuts & Pink Friday Productions
To finish the album Nicki brings it back to the Hip-Hop. This reminds me of “Itty Bitty Piggy”, just not as good. Well, at least she ends the album on a Hip-Hop note.

Bottom Line:
Let me say this first. I am a huge Nicki Minaj fan. I listened to this album for quite a bit of time hoping I could learn to appreciate it. Roman Reloaded was supposed to be all Hip-Hop, but it deviated quite a bit. It almost mirrors Nicki’s career. She came into the game as a dope lyricist, but branched out onto the pop side of things, because of the money really. This album is really like two albums in one. On one hand you have a female who is showing that she can lyrically keep up with the boys like Nas, Drake, Wayne, Rozay, & Killa Cam. On the other you have a woman who is strictly making pop records that just don’t connect with her Hip-Hop audience. Lyrically, this album makes me feel that Nicki has regressed quite a bit. Listening to all of the Hip-Hop records, you wouldn’t even know that this was the same person who did that verse on Kanye’s “Monster” where she murdered everyone on that song, including Hov. Pop wise, I can’t speak on that too much, but most of those songs could have been on the radio. Hopefully this is just the sophomore jinx. I know Barbie is better than this and I just hope she comes back to Hip-Hop.