Between The Ropes: The Tag Division 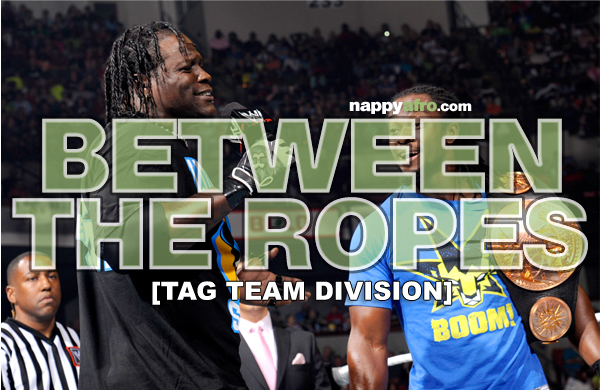 So you’ve heard me flap my gums on the FROCAST about how I follow wrestling and am a fan, so I figured why not write about it on the ‘fro. I’m not claiming to the be authority on this stuff at all and I regularly talk to folks who know way more about this stuff than I do. I’m not affiliated with any organization at all and the ideas I post are just my opinions, looking for feedback and such. That’s pretty much it for the intro, let’s get to the content.

This week I want to talk about WWE’s tag division…or lack there of. They finally have something minor brewing in the division with a lot of these teams, but it still seems a bit half-assed. So here are the 5 changes I’d make to the Tag Division in WWE as of today.
PS – WWE, you’re welcome.

1. The Belt Design
“Um Saule Wright, those belts are new and they are actually kinda dope.” I agree and hear you, but lets be flat out honest, one surefire way to make a title look like it’s worth less than the other titles is to make it bronze or copper. The other titles in the company are gold…well, all of them except the Divas title (which also doesn’t mean shit anymore). It needs to go back to gold, you can even keep the same design. Such a simple change would definitely help the look and prestige. I’d also refrain from making the strap any other color than brown or black (see the Global/TV title in TNA. Great metal design, red strap instantly makes it looks cheaper)

2. Disband Kofi & Truth – Give Truth a NEW partner
Kofi and Truth are running circles around any other team in the ring and do this while having little in the way of chemistry on the mic or even in the ring. Moves are often shouted out, waited for and rarely done without verbal communication or some other cue…and I don’t know if they’ve cut any decent promos as a team at all. Add to it that Kofi has been held back too long with tag partners who lack chemistry (Evan Bourne anyone) and he’s basically ready for the grand stage once again (I’ll get more into that in another edition). Truth’s crazy gimmick has stalled out a bit, and it really is the high point of his WWE career. Folks LOVE the bit with Little Jimmy and frankly, I’m glad he’s not still rapping and dancing (full time). Have them split up after dropping the belts, doesn’t need to be a big event or anything, they don’t have any merch together and no entrance theme so nothing is really linking to them being a team. Have Truth sink into a depression, doing weekly vignettes talking to Little Jimmy. He has some singles matches and loses about 6 in a row or something. Then in a match, when one of the opponents is about to win, he gets distracted by Little Jimmy (feels a tap or trips off the ropes or attempting a high flying move). Truth gets up, hits his finisher (he should have a new one too if he doesn’t go back to that Truth Cutter he used) and gets the win. After a few of these, he starts taking on tag teams in legit tag team matches with Little Jimmy as his partner. Have him tag in Little Jimmy, do moves like double drop kicks and hip tosses that don’t really need 2 people, have him step out on the apron, and reach in and get tagged back in by Little Jimmy. I’d even have this culminate with a Tag Championship run. WWE loves humor, and short of pairing Truth with Santino (another great idea) I’d run with this for a while.

1.) The crowd is already in love with Mysterio and Sin Cara as a tag team.
2.) They really don’t give a shit about him on the PPV level anymore (clearly, it’s not Miz, his pop at the end of the match was pretty big.)

WWE has been over with Mexicans/Spanish/Latinos (did I get everyone?)  for a while now, and it’s time for them to stop screwing with the stars they have on the roster and do something. Sin Cara is the master of botching moves, but I don’t blame him. I think between not speaking English and simply being faster than 95% of the roster, he can’t get a good footing in the singles division. He’s had some good matches with Cody, Wade, and Kidd but it’s really few and far between. A lot of the time you’ll see him standing trying to wait for the opponent to get into place for the next move. Mysterio came back to the game, but there is a noticeable disconnect with the fans. I don’t know if it’s because he’s not speaking as much or is he not speaking as much because of the way he was out? I don’t know, won’t speculate on it, but it’s different now. It’s cheap and corny to team up the two masked guys, but with the rich wrestling history of Luchadores it would be a major in for the fans as well as a merchandising explosion. Rey’s masks are always a hit with the kids and Sin Cara would probably move some merch if he could stop from getting hurt. This helps both ways because pairing his merch with Rey who always does well and splitting his ring time with Rey means less chance for injury. This team would be so over with the fans they wouldn’t need the belt but if you needed a transitional champ, they could fit the bill because nobody will ever not root for them.

4. Arrogant Brilliance
Enter Damien Sandow and Antonio Cesaro. Why the HELL would I team up those two guys who are two of the best stars in WWE? Simple, because WWE is going to fuck it up. Cesaro already has the US title…nowhere to go but down from there. That’s the belt they put on folks when they don’t know what to do with them. Santino has had it for months now and hasn’t even defended it 10 times if I remember right. Even if I’m wrong, I’m not wrong. Cesaro is working magic despite Aksana, his ring work, unquestionable, and his 5 languages intro GENIUS. Sandow is a young mic wizard reincarnation of “The Genius” Lanny Poffo but his ring work is vicious as hell. The knees, the corner beat downs, the dirty streak, this guy is a perfect heel. Since both gimmicks have them proclaiming their mental superiority as well as disdain for the people, it’s a natural fit. You don’t need Aksana, but she would be a good touch with them to add a “little” softness. If they need a REAL heel tag team with charisma and not the Prime Time Players bullshit, this is your team.

5. The G.O.D.s – Gentlemen Of Distinction (Faction)
Factions move a lot of things including divisions, singles belts, crowds, merch, and careers. Right now, WWE has some great talent stuck in spots because kreative simply doesn’t know what to do (my opinion of course). I’d make this a 4 man faction because doing more than that just doesn’t seem to work right off. It needs to have a “slight” leader but not a clear one or leader/follower type of set up like Nexus. They would be more closely aligned with the Horsemen in style and make-up. They’d feature suits, high class lifestyle, etc. Here’s who I’d put in there and why.

1.) Cody Rhodes
He’d be the majority front man for the crew. He’s unquestionable on the mic, the story of him being part of a crew (with Legacy) and his ability to carry a match and crew will come in handy. Simply put, Cody is a star, nothing less. Sure, he’s a beast in singles, but they pulled the belt from him and the mic and now he’s languishing in a feud with someone who can’t even rock the mic anyway. I mean, he’s carrying Sin Cara in a feud…that man don’t even speak yet we hate Cody for the mask pulling and shit. He’s great and can tell a story with or without a mic. What more could you want. He could easily be ringside, rocking the suit as a manager outside the ring, and then mixing it up when he has to.

2.) Dolph Ziggler (Only if don’t give him the belt, ONLY then)
Frankly, I’d rather it not be Dolph because he should be a champion right now. We can deal with Punk, Cena, or even Sheamus rocking without the belt. It’s Dolph’s time. However, for the sake of this article, let’s say that WWE has no plans to give him the gold. Ziggler has put over damn near everyone on the roster at one time or another, selling his complete obliteration in the process. He can talk and captivate, and he can work. His theme is perfection and the look is perfect. Enter Dolph Ziggler (who desperately needs a name change). His showoff gimmick would fit in seamlessly with this faction. He could help handle some beat downs, ramp up matches as well as help put them over because the fans love him and are waiting for him to do something great. When he was teasing break up with Vicki, the fans went crazy and honestly, he’s probably only still a heel because she’s around. With this group, he would give them the tweener status to work both sides.

3.) Drew McIntyre
Enter the Drew (sorry, couldn’t help that). He’s 6’5″ of agile poised power in the ring. Like the other members, he holds his own on the mic as well as in the ring. Future Shock is just too smooth to not be on TV every week. Once billed as the personal pick of VKM, he’s been a jobber and is now relegated to Smackdown. I’ll never understand his fall from the limelight because folks really liked (or loved to dislike) him. His fit in the crew would also go nicely as he ads some size and a bit of a different personality to the group. Not arrogant as much as the previous two, but simply destined for better things. Especially after such a shitty run the past year or so, he’d be due and I think the crowd would be into it.

4.) Toss up: David Otunga or Mason Ryan
Now, before you laugh too hard, realize that every group (outside of the Legendary Horsemen) has to have a weak(er) link. Mason isn’t able to get good footing in WWE because he looks too much like Batista and lacks the charisma. He does have the power and speed so the enforcer role could easily be his. Otunga proved he can be OK both on the mic and in the ring during his run with Laurinaitis. He could serve as the smart guy in the group as well as the diversity. I hate that the only factions we are a part of are some rebellious Nation of Domination type gimmicks. Otunga could slide into this refined type of role easily as it’s not far off from his lawyer persona. He also has the muscular size to be the “enforcer” if need be.

What do y’all think about what I’ve proposed? Would you like to see any of these changes made? Am I batshit crazy? Let me know below….and wait until next week. I got another good idea.