Quentin Being Quentin: Why Django Unchained Was JUST A Movie 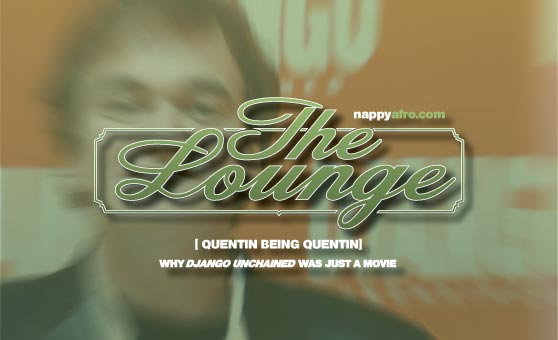 I am a man. As such, I can admit when I’m wrong. My most recent wrong I had to fess up to involved Django Unchained. I just knew that a slavery movie, released on the birthday of sweet baby Jesus himself no less, was destined to fail. I just didn’t think America wanted to be reminded of its dark past when it was trying to be jolly and merry. Especially since a lot of folks are still mad that ‘that one’ is going to get another shot at that presidency thing. Boy was I wrong. It brought in $64,008,265 opening week wrong.

$16 of that was my hard earned cash. The old lady and I went and checked out the movie last Friday. Although it ran a tad bit long, it was a good movie, a really good movie actually. I was thoroughly entertained throughout. It’s really hard not to like a Quentin Tarantino movie, and Django is no different. It’s action packed, sports a stellar cast and ironically is one of the best comedies of 2012, without even trying. The movie definitely isn’t short on the accolades that it deserves. Yet at the end of the day that’s all Django Unchained lives up to be: A movie, nothing more and nothing less. However, the film has garnered a very mixed reaction of acclaim and ridicule.

Starting with the detractors, many people’s biggest gripe with the film seems to come from the obsessive use of the ‘n-word’, the word which still seems to be a driving force in the derailing of Black progress, even in 2013. Tarantino has no qualms in granting his characters license to use the term, so I was fully prepared to hear the word at least 300 times. When I counted, I came to a total of 107 times the epithet was uttered (give or take), way below what I expected to hear. I agreed with Tarantino that the dialogue fit the time period, so the word was just not as jarring to me as it was for others.

What I do find jarring is that in 2013 we are still upset at a word, yet are still complacent when it comes to facts and figures. How can we see the oppression in a five letter word, but cannot see it in staggering Black unemployment? Why are we so quick to call a filmmaker racist but won’t question the racial prejudice of teachers that jeopardizes our children’s educations? What makes it so easy to hold entertainers accountable but not our politicians?

Another point of contention is the level of gratuitous violence present throughout the film. Again this should only be surprising if this is your first Quentin Tarantino movie. Tarantino likes bloodshed, lots of bloodshed. To think that it wouldn’t be present, especially in a movie taking place in such a grotesque and violent era, is a tad bit on the absurd side.

Just as critics may have been overzealous in their disdain of the film, some fans may be overreaching when it comes to declaring the films achievements. For starters, many are praising the social commentary of the film. While we do repeatedly hear Christoph Waltz’s character constantly lament the inhumane status of slaves, this is not an abolition movie, as vengeance and business are the motivation for the leading characters, not moral decency and humanity. If anything, one could make the argument that the movie is counter-intuitive for productive commentary on race. It is easy to dismiss the images of travesties and injustices because slavery is seemingly an obliterated institution. Most would say African Americans are no longer in chains working in fields. Words like the ‘n-word’ are reprehensible and folks that use it are minute in number, relics of a bygone era that can’t possibly have any relevance in the present. Everything is good, right? Just as most view the present as a post-racial society where racism and inequality are an excuse rather than a problem, many see Django and see a past they are far removed from, not a period which developed an institution whose effects are still alive and well today. Of course Tarantino cannot ultimately control how and what people take away from the film, the former stated scenario seems very likely.

While not everyone is heralding the progressiveness of Django, many are seeing, beneath the slurs and gut-spewing, a touching love story. I won’t deny the passion that it takes for a man to risk everything to save and free his stolen wife. There is definitely some strong loving in this flick. Unfortunately, some folks, mainly ladies, won’t let it rest there. I for one saw a few of my female Facebook friends and Twitter followers lamenting the state of Black love, and Black men in particular. While I certainly don’t begrudge anyone for connecting with the romance between the characters, I don’t understand why it has to come at the expense of everyday brothers. Ladies, while there may not be a questionably dressed guy killing folks in your honor out there, there are tons of men who will treat you nice, respect you and be help provide for your partnership. You just have to make sure you don’t call him thirsty.

Say what you will and draw the conclusions that you will, but at the end of the day we are left with another hit movie that will make a lot more money and win a bunch of awards. Art is definitely subjective and has the power to elicit strong and varying responses from those who view it. Only this time, it just may be okay to have fun and enjoy the action-packed blockbuster for what it is. Hate it or love it, Quentin Tarantino is still going to be on top.