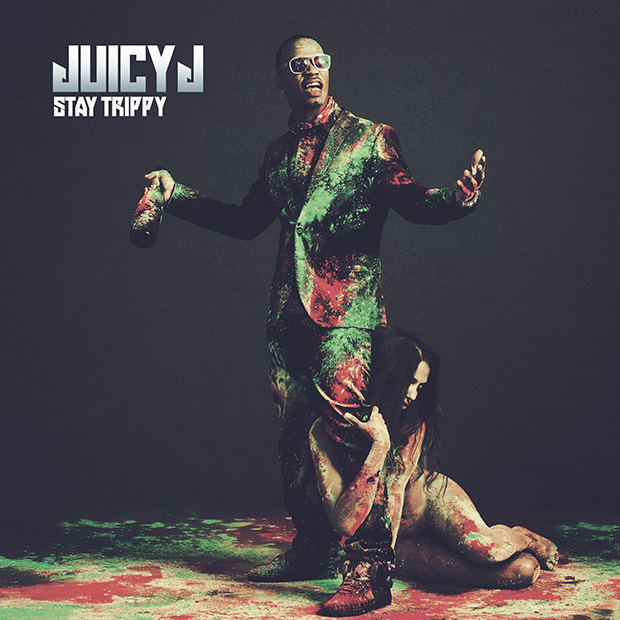 1. Stop It
Produced by Mike WiLL Made It & Marz
Juicy J raps over a beat that fits his style well. I really don’t expect to be wowed by any of the lyrics by Juicy J. If all the beats sound like this one, who cares about lyrics?

2. Smokin’ Rollin’
Featuring Pimp C; Produced by Juicy J & Crazy Mike
Yeah, you read that correctly! The late, great Pimp C makes an appearance on this album. Sounds like the Pimp never left the way he killed this verse.

3. No Heart No Love
Featuring Project Pat; Produced by Young Chop
Project Pat got on the track and did his damn thing! I really miss Project Patta rapping over these type of beats. This reminds me that I have to go listen to Mista Don’t Play.

4. So Much Money
Produced by Lex Luger, Juicy J, & Crazy Mike
Do we have a new get money anthem? I think we do! I can see myself rapping this on payday!

5. Bounce It
Featuring Wale & Trey Songz; Produced by Dr. Luke, Cirkut, & Baby E
I really don’t like this song, but I get that it has a place. I really just hate the hook. I can see this getting some play at your local strip club. Wale didn’t do that bad, I might have to give him a shot.

6. Wax
Produced by Juicy J & Crazy Mike
This is one for all the smokers out there! The beat on this one is BANGING!

7. Gun Plus A Mask
Featuring Yelawolf; Produced by Juicy J & Crazy Mike
Juicy makes a song for the goons with this one. I mean, he has all the bases covered on this album. Something for all walks of life. Just waiting for a song that uplifts people. Yelawolf continues to impress me on his cameos, but I just can’t listen to a whole album by him.

8. Smoke A Nigga
Featuring Wiz Khalifa; Produced by Mike WiLL Made It
Wiz is on the song so you know what the main topic is… WEED! I guess this isn’t going to be that uplifting song I was hoping for. Wiz wasn’t that annoying on that song, might I add.

9. Show Out
Featuring Big Sean & Young Jeezy; Produced by Mike WiLL Made It & J-Bo
You’ve heard this one on the radio and I didn’t like it then, and I damn sure don’t like it now. This is just a bad combo of rappers on a song at the same damn time. 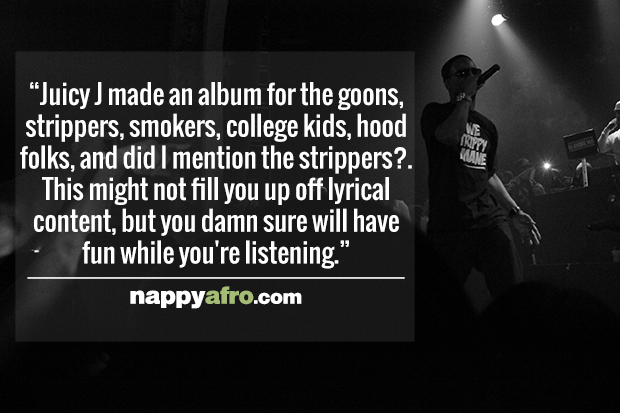 10. The Woods
Featuring Justin Timberlake; Produced by Timbaland
This isn’t what you would expect from Juicy J. Nah, yo. Nah.

11. Money A Do It
Produced by Juicy J & Crazy Mike
Thank goodness, back to business on this track. Juicy gets back to what we have grown to expect from him. This seems like a song that would feature DJ Paul; now that would have been dope!

12. Talkin’ Bout
Featuring Chris Brown & Wiz Khalifa;Produced by ID Labs, SAP, & Ritz Reynolds
Juicy puts the boss on another song and this one seems more like a Wiz song than a Juicy J song. Is it me or will them Three Six niggas throw a “yeah hoe” on ANY song? Oh, Breezy is rapping on this track. How he go harder than Wiz?

13. All I Blow Is Loud
Produced by Lex Luger
The title says it all. Sad that we have a generation that only smokes loud. They do have some good regular out there on the streets, but if I had the money, I would only smoke that pack all the time myself. That is, if I smoked.

14. Bandz A Make Her Dance
Featuring Lil’ Wayne & 2 Chainz; Produced by Mike WiLL Made It & J-Bo
Didn’t this come out last summer? Why did you put it on your album? I mean the song goes and I have seen some MAJOR action when this song comes on, so I get it. If you’ve never witnessed this song in action… YOU NEED TO GET YOUR LIFE!

15. Scholarship
Featuring A$AP Rocky; Produced by Dr. Like
Newsflash… Juicy J loves the strippers. Even to the point of paying for they schooling by dancing for him. I really can’t see Rocky in the strip club, just doesn’t look like his type of vibe.

16. If I Ain’t
Produced by Lex Luger
Juicy J. gives us a glimpse of his life on this song. I can’t even get mad at him on this one.

Bottom Line:
Juicy J lives the life that I would think most guys would love to live. He’s single, rich, loves to smoke potent weed, sips lean, goes to strip clubs, has sex with multiple women, and makes music. Not a bad life if you ask me. That is exactly what we have on Stay Trippy. You want authenticity with your emcees… Juicy gives you that and more. He made music for the goons, strippers, smokers, college kids, hood folks, and did I mention the strippers? This is an album that you can throw on if you got company over and ya’ll are “partying” and the vibe will be great! This might not fill you up off lyrical content, but you damn sure will have fun while you’re listening!