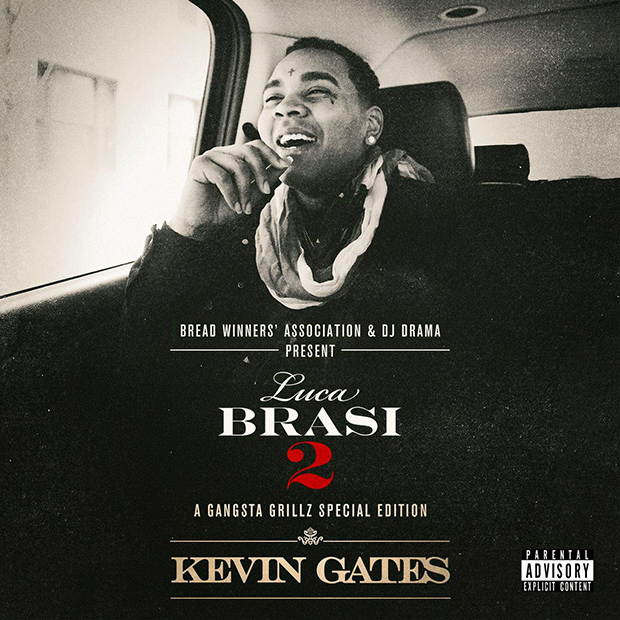 Bread Winner’s Association’s leader, Kevin Gates, releases the follow up to By Any Means with his second project of 2014, Luca Brasi 2. The sequel to his breakout 2013 mixtape caps off an incredible year for the Baton Rouge native that included a place on XXL’s coveted Freshmen list, his By Any Means Tour with Taylor Gang’s Chevy Woods and a tour with his Atlantic records label mate B.o.B. All of these accomplishments musically and one interview with DJ Whoo Kid overshadowed his talent. If you mention his name to the average Hip-Hop fan, they will immediately associate him with eating booty.

1. Luca Brasi Intro
On the introduction, listeners are treated to some tough talk and some ish talking here. It’s a great way to start off with an aggressive flow, but the lyrics are everywhere. We begin with a short phone convo where Luca, the enforcer for the Corleone family as portrayed in The Godfather series, is called up once again for a favor.

2. I Don’t Get Tired
Featuring August Alsina
We get a mellow beat on this song inspired by his notable quote (No, not, “I eat the booty”.), but the aggression in Gates’ flow from the intro sticks around for this motivational anthem. I think having August Alsina, fellow Louisiana native and XXL 2014 Freshmen, on the hook makes it viable for radio play.

3. John Gotti
I don’t understand why rappers are still giving credit to gangsters and criminals that don’t deserve to be glorified, don’t care about Hip-Hop, or wouldn’t give them any recognition in return for being mentioned in their rhymes. Thankfully this isn’t just another “B.M.F.” rendition; besides the chorus, the original Teflon Don is not mentioned or revered in any of the verses. The chorus makes me really enjoy this song, it’s catchy:

You would think the subject matter wouldn’t mesh well with the production, but they work well together on this song and are both memorable.

4. Perfect Imperfection
“No one is perfect” or “It’s our imperfections that make us perfect”, which ever saying you prefer, we get a new perspective thanks to Gates proclaiming that he has perfected all of his imperfections. He reflects on his past history and lets you be the judge if he’s better than he was once was when the song ends.

5. Plug Daughter
Either this song really didn’t have great storytelling or I wasn’t into the story from the beginning. She’s the daughter of his drug connection and they are fooling around. I don’t think I missed anything. SKIP.

6. Out The Mud
Everyone has a beginning: This is the origin story of the man he became. While everyone is asleep, he’s up all night doing illegal activities for the money. The production will definitely make your trunk rattle and there are definitely are couple of quotables in the lyrics.

7. Thugged Out
Featuring Boobie Black
Gates and his BWA comrade, Boobie Black, like thugged out female companions. I will let them have all the women that drink Bud Ice and smell like Grape Black N Milds. This is not one of my favorites.

8. Sit Down
Now I’m noticing the mafia theme on this album. Instead of agreeing on peace, this is the audio version of the end of 50 Cent’s “Many Men” video. Before he fights with any outsiders, he makes sure that his clique, BWA, are as thorough and as loyal as he is for their mission.

9. Complaining
Featuring Rico Love
I think Rico Love is a great songwriter, but I’m not a fan of his singing. The “They Don’t Know” songwriter (I hated that song) reunites with Mr. I Don’t Get Tired for their second collaboration this year. Like their previous effort, “Strokin'”. this song will be removed from my playlist. If your girl is mad, buy her a bag so she’ll stop complaining. Great plan, groundbreaking advice. SKIP!!!!!!! 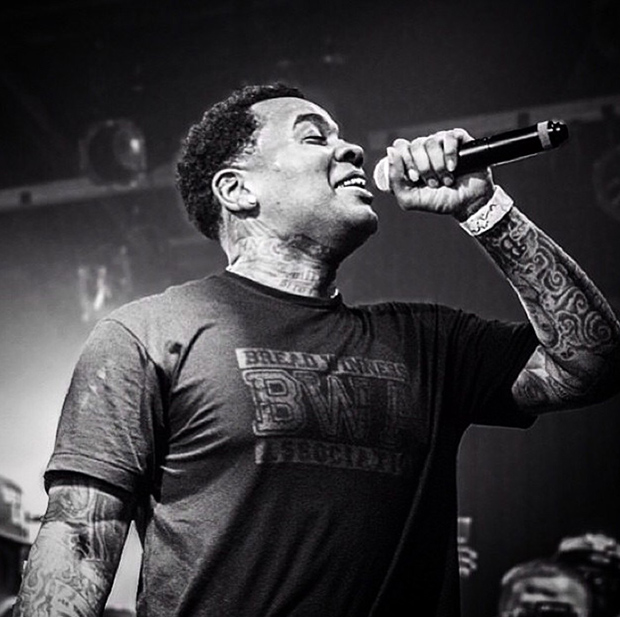 10. Talk On Phones
Produced by B.o.B
The Feds are watching and listening at all times, we know this thanks to conspiracy theorists and anyone that has sold a little bit of drugs that really think they are moving weight, but they’re just paranoid after watching, The Wire. Nothing really great here on the lyric side. It’s not one of my favorite songs. It’s cool to see his tour mate, Bobby Ray’s name in the production credits.

11. Wassup With It
Earlier this year, I found the best way to describe Kevin Gates’ music. I used to say that he was the version of Drake that went to jail and was born in Louisiana. It’s easier to just say he’s Drake mixed with Boosie Badazz. Listen to this song if you want proof.

12. Don’t Panic
Picture Kevin Gates being scared of someone that bleeds just like him. He ain’t got no worries because he got shooters and don’t mind doing time. Penitentiary rules in effect! Overall, my feelings on the song can be put in one shoulder shrug: Ehh.

13. Break The Bitch Down
Featuring K Camp
Are we back to “song for the ladies” mood on this song that sounds like a DJ Mustard beat? I’m disappointed in K Camp because he doesn’t sound like himself at all on this song or provides a verse.

14. In My Feelings
Now this is a love song I can listen to regularly. Louisiana’s biggest new rapper kind of over does it with the use of “Bae” in the chorus, but the love for family and friends gets highlighted in the first verse so well that I can’t hate the song:

Don’t no one understand me supply and demand all this shit get demanding
Why the fuck is you standing
Over there seeking a handout I’m not finna hand it, godamnit
Tattoos on my neck that read Kayla and Brandon
My nephew was born premature
I prayed from em’, everyday for em’
He’ll smile at me make a face for em’
My auntie say thanks which I couldn’t believe and I act as if that don’t exist
Too much respect for to call you a bitch
All praise go to heaven your god don’t exist
Love everything and everybody
Black sheeps scum of the earth
With popular people I don’t fit
They was stupid they focus on bullshit
Now the whips they be driving is bullshit
Yo pastor lie to you right from the pulpit
Go hard or starve
No wait on God
Give him your money? That’s bullshit
Full clips and a firearm
Put it in a ho name so I buy it for em
Pockets was slim as a diet form
Good dope sell itself wanna try it for em?
Smoke out hotel rooms and set off the fire alarm
BWA start a riot for em
I don’t get tired, what you tired of?
Call what’s her name say she tied up
My mind going negative fuck your perspective
These interviews really got pussy
other men gossiping just like a woman

15. Pourin’ The Syrup
I’m tired of any mention of syrup/drank/double cups/pouring up in Hip-Hop, but it’s the drink of choice that makes Luca Brasi open up the most personally and delivers in my opinion the best performance on the project. The topics go everywhere, but they are all personal to him.

16. Wild Ride
You only live once, but I think Drake would blush if he heard this song. As we dip into the Boosie influence of Gates in this song, the honesty continues from the previous song to “Wild Ride” where we, the listeners, get to be a fly on the wall as Kevin shares his sexual history with a female that might become his next victim. I love this instrumental on here. I know he says, “this ain’t no make believe” in the chorus, but this is great storytelling and for those wondering, yes, he mentions tongue play in the butt in the last two lines before the song ends.

17. Word Around Town
Featuring Rich Homie Quan
Before we end Luca Brasi 2, we take a trip back to his native Baton Rouge and hear about the latest gossip. Once again, for a big name feature, he does not use them as well as he should. I keep expecting more to come from Rich Homie Quan besides the hook. Also, I could barely tell if it was him or not.

18. Making Love
“Making love to the money!”. Brasi is married to the hustle ladies, keep it in your pants. I think he would have been better off ending Luca Brasi 2 after “Wild Ride”. This song is not really a good ending note, it’s an okay song about being focused on the grind, but it’s a minimal highlight sharing the same space on the tracklist that includes, “Out The Mud” and “I Don’t Get Tired”.

Bottom Line:
Luca Brasi 2 is a good introduction for those that aren’t familiar or don’t understand why the Louisiana native is a big deal. He basically held down the entire project solo. Aside from August Alsina, his features didn’t add anything to his songs. Even though Gates opens up and will share about his past relationships and drug tales, the subject matter could have been more diverse or he could have given us some commentary on current topics or his current life more. Overall, Brasi 2 gives more reason as to why he gets interviewed by many outlets and discusses a barrage of topics besides eating ass. He can get on a beat and create songs with emotion and attention grabbing lyrics.