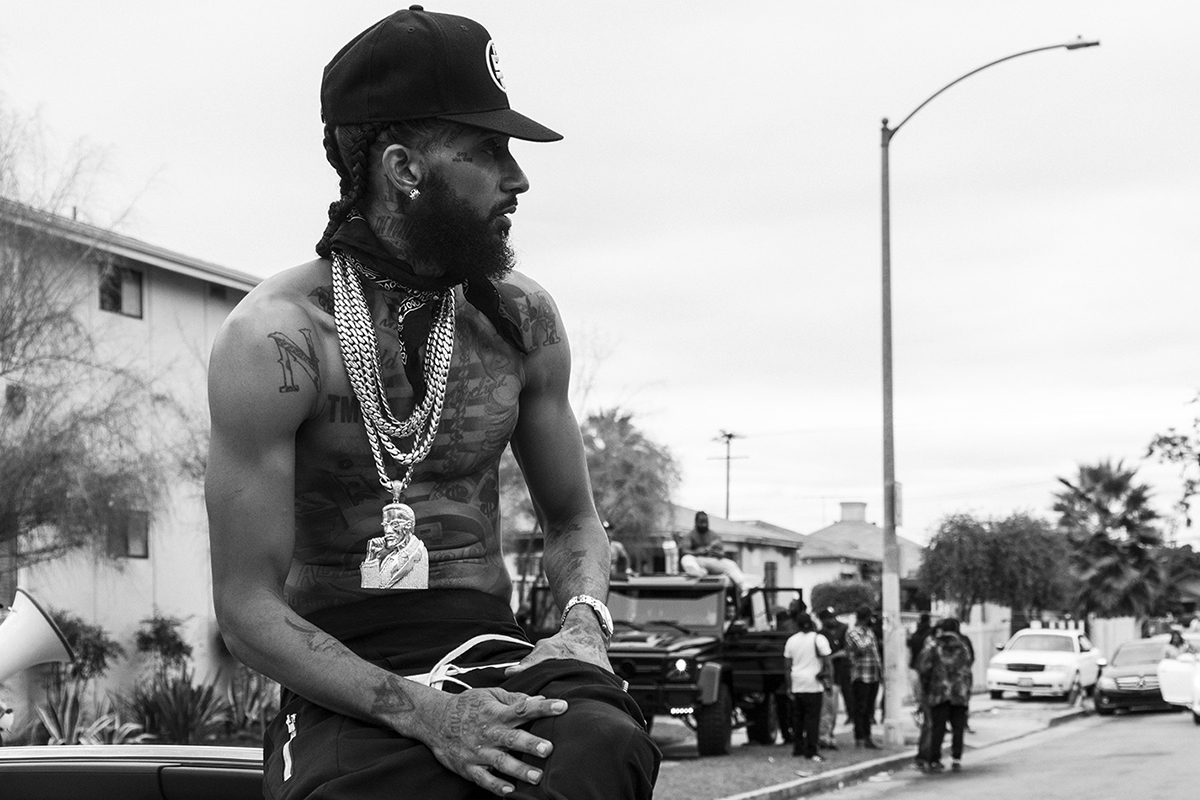 This review of Nipsey Hussle‘s Victory Lap is late. Not to the point where I have to put “Late Ass” in the title like I did with the Jay-Z’s 4:44 review, but late nonetheless. I usually like to put out a review in between the time when the album actually drops and before it officially debuts on the charts. But shit happens and you are now reading the review.

But when you think about it, me being late with this review fits with Victory Lap seeing that when people have been waiting on this album for years and waiting on a proper debut album from Nipsey for over a decade. While fans waited, we saw growth in Nipsey Hussle from “Hussle in the House” to selling mixtapes for a $100 a piece (And later a $1000 a piece) and going hard on the independent scene to dating and having a kid with Lauren London.

Now after signing with Atlantic Records, the world finally gets a studio album from Nipsey Hussle in the form of Victory Lap. Does this mark a triumphant moment for Nip and his All Money In team? Let’s find out.

1. Victory Lap
Featuring Stacy Barthe; Produced by Amaire Johnson & Sap
We jump right in with the title track of the album. “Victory Lap” sets the tone for the rest of the project as Nipsey Hussle talks about his come up from the streets to bossing up and where he is now. The production and Stacy Barthe’s voice give this story a melodic feel. Good enough opener.

2. Rap Niggas
Produced by DJ Khalil, Larrance Dopson, & Mike N Keys
This is the song that really got me interested in this album. The production exemplifies an old school west coast feel and I’m all for it. “Rap Niggas” is kinda what Nipsey Hussle is all about; he seems to have always been about being more than a regular rap nigga:

Drive down to the Hamptons to relax, nigga
I stopped smokin’ weed, then I relapsed, nigga
Traveled ’round the world, and I came back, nigga
Worth a couple a million, that’s a fact, nigga
But I am nothin’ like you fuckin’ rap niggas
I own all the rights to all my raps, nigga

The simplistic rhyme scheme fits well here and when he said “I own all the rights to all my raps, nigga”, he said that shit with his soul. The music video is dope too.

3. Last Time That I Checc’d
Featuring YG; Produced by Kacey Khaliel, Brody Brown, Larrance Dopson, & Mike N Keys
Before I did this review and read the production credits, I honestly thought DJ Mustard did this beat. So what we get is a DJ Mustard type beat with YG & Nip reaffirming their street cred. It’s nothing really special especially when you think about their last big collaboration “FDT”. Maybe things will be better on their joint project.

4. Young Nigga
Featuring Puff Daddy; Produced by Axl Folie, Ralo Stylez, Nipsey Hussle, Larrance Dopson, & Mike N Keys
Getting Puff Daddy to do ad-libs on your song is a cool flex. I’m just not sure if “Young Nigga” was the right song for it. An example of a good Puffy ad-lib feature in 2017/18 is Jeezy’s “Bottles Up”. This is an okay album track but Puffy’s speaking gets in the way of Nipsey’s rhymes. This could have been better.

I spent my whole life starin’ at the stage
Playin’ Sega, daddy smokin’ sherm, mama playin’ spades
Catchin’ vapors, grandma said I’d get some Jordans for my grades
That’s my baby, when she died my heart broke a hundred ways

A good thing for Nipsey is that he doesn’t feel overwhelmed here; he doesn’t sound out of place besides arguably the best rapper out right now. This collaboration lived up to the billing.

6. Blue Laces 2
Produced by Mike N Keys, Mr. Lee, & Larrance Dopson
I really don’t remember the first “Blue Laces” that well, but Nipsey told NPR that LeBron James was listening to it before he won his first championship. I couldn’t find any video of this but I believe the story because their is video of LeBron listening to “Blue Laces 2”. Going back and listening to original version, I see that “Blue Laces 2” is a true sequel as it’s a improved and cleaner version of the original that continues the subject matter as well as the laid back theme.

7. Hussle & Motivate
Produced by DO Speaks, Street Symphony, Brody Brown, Larrance Dopson, & Mike N Keys
Initially I didn’t hear the sample of “Hard Knock Life (Ghetto Anthem)” but it’s here and it’s a good sample flip. Apparently Jay-Z signed off on this but why would he be the one to do so when the original was also a sample? Speaking of Jigga, seeing the support he has shown for Nipsey in the past, I’m surprised he didn’t make an appearance on this album.

“Hussle & Motivate” is in fact the perfect name for this song. The driving drums, Nipsey’s lyrics, and the hook are a great backdrop for the gym or just in any situation where you need a little push to greatness:

Back in this bitch like I never left
Stand for some shit that you never rep
Passing through stages in life
Through the ups and the downs like it’s all just another test
Hit by the rules like a fuckin’ ref
I got respect in a hundred sets
Too many chains, need another chest
Playin’ no games if it wasn’t chess

8. Status Symbol 3
Featuring Buddy; Produced by Mike N Keys
The hook on “Status Symbol 3” is sitting in between being really catchy to kinda irritating; I’m still trying to figure it out. It’s not a terrible song though but it should have been called “Almost Forgot” but apparently every time Nipsey Hussle & Buddy do a record it must be called “Status Symbol” and Buddy has to only do the hook. It’s okay.

9. Succa Proof
Featuring Konshens & J-Black; Produced by Mike N Keys, Larrance Dopson, & DJ Khalil
On “Succa Proof” Nipsey takes aim at celebrities who take up gang banging after getting famous. He does this with gun effects added and an obligatory reggae artist appearance. It’s not the greatest song on the album but I approve of the subject matter.

Question: Is J-Black just 6lack and nobody told me? They sound exactly the same and both have “black” in there name. I’m just gonna assume they are the same person.

10. Keyz 2 The City 2
Featuring TeeFlii; Produced by JustJosh Music Group, Resource, Mike N Keys, Jake One, & Teddy Walton
Nipsey brings yet another sequel to a previous song with “Keyz 2 The City 2”. Unfortunately at first that’s what turned me off to this song. I really liked the first “Keys 2 The City” and it’s just a better song that this sequel. The awkward beat change in the last 30 seconds help me like the song more but this is another case where the song probably should have been named something else.

11. Grinding All My Life
Produced by Murda Beatz
If Nip was aiming for the club on this one, he achieved it. “Grinding All My Life” also fits in the vein of previous songs on the album in that it also serves as a way for Nipsey to talk about his accomplishments while motivating. Then again, how can a catchy bass heavy song with a chorus that repeats “Grindin’ all my life” not provide motivation?

12. Million While You Young
Featuring The-Dream; Produced by Lamar “Mars” Edwards, G Koop, Jake One, Amaire Johnson, & Mike N Keys
Here Nipsey Hussle does what the title of the song says and explains how to make a million dollars… while you are young:

Can’t be actin’ like a bitch tryna get saved, bruh
Get that dirt up off your shoulder, step yo game up
Can’t be chasin’ pussy, switch your ways up
Can’t be fuckin’ off your lucci, gotta save up

It’s not a bad song and contains good production towards the back end. But it’s also nothing that really grabs you; Nip rapping over a low key beat and The-Dream does the bridge. Actually now that I think about it, The-Dream didn’t really add anything to the track (And I think he’s an underrated artist). Serviceable album track.

13. Loaded Bases
Featuring CeeLo Green; Produced by Jake One & Larrance Dopson
You know immediately that “Loaded Bases” is a good song; as soon as Nipsey Hussle gets into his verse the track’s drums comes alive and it goes from there. The instrumentation is the standout on this but Nipsey does his thing too and sounds great over it.

At first I felt like they could have chose a different singer other than CeeLo but after a few listens I changed my mind; he fits here. One of the notable tracks on the album.

14. Real Big
Featuring Marsha Ambrosius; Produced by Lamar “Mars” Edwards, Larrance Dopson, & Mike N Keys
Like most rap albums of this nature, Nipsey ends Victory Lap reflecting on his journey from the streets to where he is now. This is his validation in believing in himself that he could actually do it “Real Big”. It’s a nice ending and I’m wondering if bookending/paralleling the first song on the album, “Victory Lap” featuring Stacy Barthe, and ending with “Real Big” featuring Marsha Ambrosius, was on purpose. If it was, good job. And that ends Victory Lap.

After being one of the faces of west coast independent rap, Nipsey Hussle finally achieved one of his dreams and released a major album. To even add more to the happy ending and the come up, Victory Lap also grabbed the #4 on the Billboard 200 upon it’s release. That’s a solid win for Nipsey and All Money In.

An easy way to describe the feel of this album is to say it’s like a west coast Rick Ross in terms of sound. That’s a good thing. Tracks like “Loaded Bases” and “Hussle & Motivate” back this statement. Lyrical wise, Nipsey is very deliberate with his flow and words and doesn’t deviate much. It’s mostly street tales, his rise to fame from those streets, and words of motivation. This is not a bad problem to have but some may get bored over the course of a entire project. (Sidenote: Where the hell is the Swizz Beatz featured “Been Down”?)

With a few stumbles here and there, Victory Lap is still well worth the wait and cause for celebration for the kid from Crenshaw.