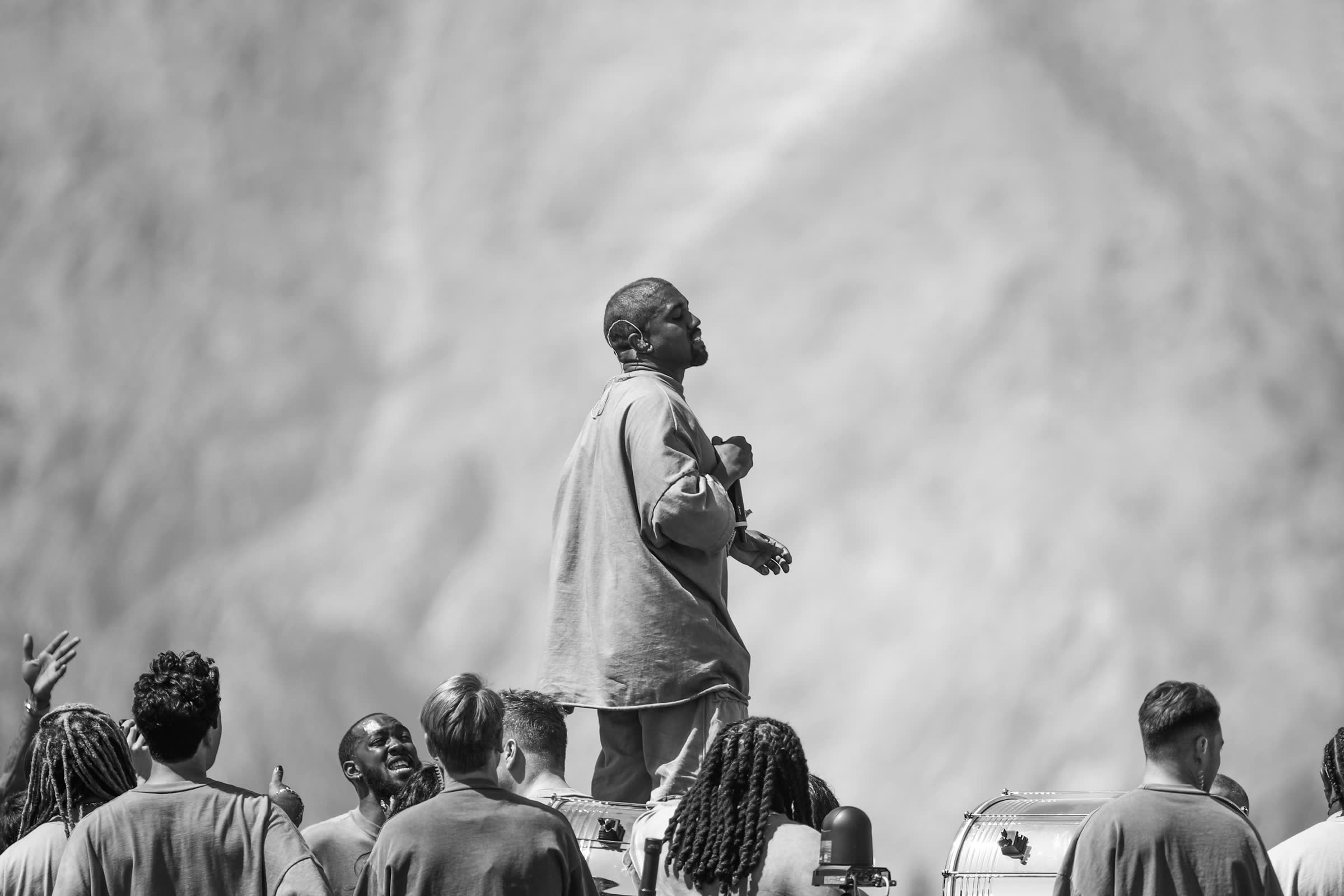 The last time I reviewed a Kanye West album for this website, I was conflicted. I was not ready to fuck with Kanye, especially after his antics reached new lows even from him.

But even before he revealed to be a Trump apologist, I was near done with Kanye. His rants at his performances, his toxic presence around his peers. He just seemed like someone in which fame has chewed up and it has finally got the energy to spit him out. Then Kanye revealed his superpower. Then, I wasn’t so sure anymore.

Not to say I felt incredibly sorry for him but it was difficult to resonate that a voice that helped shape my musical tastes through senior year of high school/college became… whatever the hell I saw on my TV screen that May on TMZ.

Ye was not well-received unless you were in the upper echelon of Kanye fandom, he took the last 365 days making an ass out of himself. From shining Trump’s shoes on camera in the White House, to threatening Drake and Travis Scott on Twitter, Mr. West in my eyes had become a laughingstock.

Maybe, I am a cynical person like that, but I thought this whole Sunday Service/Jesus Freak display was a charade (I still think it is, to an extent). I mean you can’t tell me that it is Christ-like to watch a man put a holy spin on his classic songs and then afterwards sell me a Sunday Service long sleeve for $300. It had then been revealed that an album will be out. From the remnants of Yandhi comes JESUS IS KING. An album that takes from gospel and other Christian music influences to let us embark on Kanye’s musical transition away from secular music.

Will I become a believer? Let’s find out as this review is a lot like Jesus…

Never on schedule, but always on time.

1. Every Hour
Produced by Budgie Beats, Federico Vindver, & Kanye West
You know I am not gonna lie, this was a very good intro. If this is going to be a gospel album, then you have to make me believe that I am going to feel something or be inspired by what you are going to say or whatever is going to be your journey and how it is processed to the listener. Okay start.

I admire the epic sounding production to make it feel like “Every Hour” was the intro to the intro, but Ye dropping Bible cliff-notes as if this is an audio Bible Study for Dummies laid out in the verses…yeah, I don’t know. There’s good elements such as that production building up throughout, though it isn’t enough for me to say that I can listen to this repeatedly.

3. Follow God
Produced by Xcelence, Kanye West, & Boogz
This beat slaps. I think back to College Dropout/Late Registration era with a modern twist on the chopped up soul samples. I wanna say that this could be something J. Cole could make if he had a cup of coffee every now and then to get some energy up.

Now lyrically…Kanye…what the heaven are you doing?

I mean I knew what he was going for with the flow, because if you only paid attention to the beat and the flow and nothing else, if the lyrics are dead last in importance to your ears and your listening experience, then this would be a very dope song. But then you think back to what the content of this album is supposed to be and voila, there is nothing there. This is Kanye trying to make a club banger for Christ. It doesn’t work for me here.

Oh yeah. That little bit in the end where Kanye just screamed out of nowhere…

Hilarious…but it is only hilarious because for an album inspired by the Lord, the only place to go from here is Hell.

I mean…this is just a joke at this point. I mean Kanye has always had corny moments in his music (“bleached assholes” would ring a bell…)

Most often than not, he has been able to get away with it….but this???

Closed on Sunday, you my Chick-fil-A
You’re my number one, with the lemonade

You know what the funny thing is, I have watched YouTube reactors, try and defend this bullshit. Kanye has a pull on folks like that I guess. This moment is one of those things that I would later encounter throughout the album, is why I find it so difficult to take this seriously. I mean the acoustic guitar at first was decent but then all of that came in and it just took me and my interest out of the song. Anyways… CHICK-FIL-A!!!

5. On God
Produced by Pi’erre Bourne, CAMEone, Boogz, & Kanye West
I didn’t know that Heaven would sound like I’m in Sonic the Hedgehog.

But yeah, with that being said, I don’t know what I am supposed to take from this. Like he went from being positive to once again bitching about his “rich nigga problems”, justifying why he charges so much for his shoes and that he is charged too much in taxes. I do not like when celebrities complain as if they are starving and that they can’t eat. Kanye…you are married into the Kardashian family, your Yeezy brand has made you a billionaire apparently…you are set for life, what are you complaining about?

And to make matters worse, what is so Christ-like about addressing your vanity?

6. Everything We Need
Featuring Ant Clemons & Ty Dolla $ign; Produced by FnZ, Ronny J & Kanye West
I got a whole bunch of nothing here.

I mean the melody is okay. I like Ty’s part on this song but what am I supposed to take from this? Another corny moment from Yeezus here lyrically. I mean I get what he was doing with the Adam/Eve narrative but it just comes off as weak.

7. Water
Featuring Ant Clemons; Produced by Boogz & Kanye West
I think this song is where my overall conflict with this album manifests. If Kanye is turning his life over to Christ and this album is a “testament” (see what I did there.) to his journey, the idea is to give the listener a glimpse into that journey. But when I get a whole bunch of “Jesus is this. Jesus is that. Jesus loves me.” bullshit, why should I be inspired by this? It comes off vague and lazy which a lot of this has been.

8. God Is
Produced by Labrinth, Warryn Campbell, & Kanye West
I’m not gonna lie, a part of me chuckled on the inside listening to this.

I mean imagine Kanye on the pulpit, screaming his lungs out with these words, with a voice that sounds like he had a swallow of the Holy semen.

9. Hands On
Featuring Fred Hammond; Produced by Timbaland, Angel López, Federico Vindver, & Kanye West
Kanye does not have any right to pull a victim complex. If Christians were to judge you, that’s what they do anyways, but in his case, with all of the things he has said and done, and the way he has rolled this album out, don’t you think they have a right to be apprehensive about him? What has Kanye ever done that doesn’t have an endgame? I am just over the constant bitching sessions he has on these albums. Especially when you are either unwilling or unable to be detailed about your problems in a way in which you end up not taking accountability for the role you put yourself in.

10. Use This Gospel
Featuring Clipse & Kenny G; Produced by Pi’erre Bourne, Angel López, Federico Vindver, Timbaland, & DRTWRK
I feel like what could have been with this song was unfulfilled. I mean this is the fucking Clipse dude. What made them unique is not just the dichotomy between the two but the impact and this just felt paint-by-numbers even for Clipse. Something just felt off about their verses, like maybe the vocals weren’t mixed right, the delivery felt kind of rushed, I don’t know, it felt like Pusha and (No) Malice were kind of phoning it in. Ye stayed in the background for most of the song except for the chorus which I think was a good thing. The Kenny G solo was aight.

11. Jesus Is Lord
Produced by Brian “All Day” Miller, Angel López, Timbaland, Federico Vindver, & Kanye West
If you are into 50 seconds of hearing Kanye blow his load for Jesus Christ, then this track right here is for YOU!

What a missed opportunity here.

You know I had to re-write this three times?

I mean, what am I really supposed to say about this? In the last week of this release, I have given this more spins than it truly deserves and every time, I have left learning nothing from it. For someone who is as outspoken as Kanye has been for the last year about different aspects of life, you would think that it would translate into the very craft that holds him in such a high regard. From politics to religion, I have just come to the realization that Kanye West doesn’t have a clue what the fuck he is talking about.

I don’t WANT to trivialize his mental illness, but you can’t possibly tell me that the original version of this album was scrapped after some divine intervention, got reworked, delayed time after time, missed several release dates only for what we got to come out and that this came from a man that knew what he was doing. No, this is the work from a man who has become scatterbrained artistically, conflicting mentally and frustrating personally.

If Kanye has truly found the Lord, then all glory to him. But I don’t need a 27 minute album of him telling me how “great” he is. If this album was to describe this journey throughout the year from the Sunday Service shows to the interviews to the unnecessary pro-Trump rants, why would Kanye feel the need to choose not to tell his story. Why is he so overblown in interviews and on platforms that will give him free rein to say whatever but when it is time to display that in the music (THE ONLY THING THAT MATTERS) everything feels so muted and vague and overhyped. I think it took repeated listens of this album, to really hammer in the notion that at this stage, Kanye West is someone I no longer understand and quite honestly, I don’t think I am meant to understand him.

But enough of my psychoanalysis. This album is a holy dumpster fire, with Kanye giving me nothing lyrically, the songs as a whole gives the impression of it being more than what it is but when you peel back the layers, is limp in the quality and this is really Kanye’s continued descent into a former shell of his artistic self by giving the listener rushed, underdeveloped material. If you are a fan of this, enjoy. Me however? I’ll stick with the old Kanye.