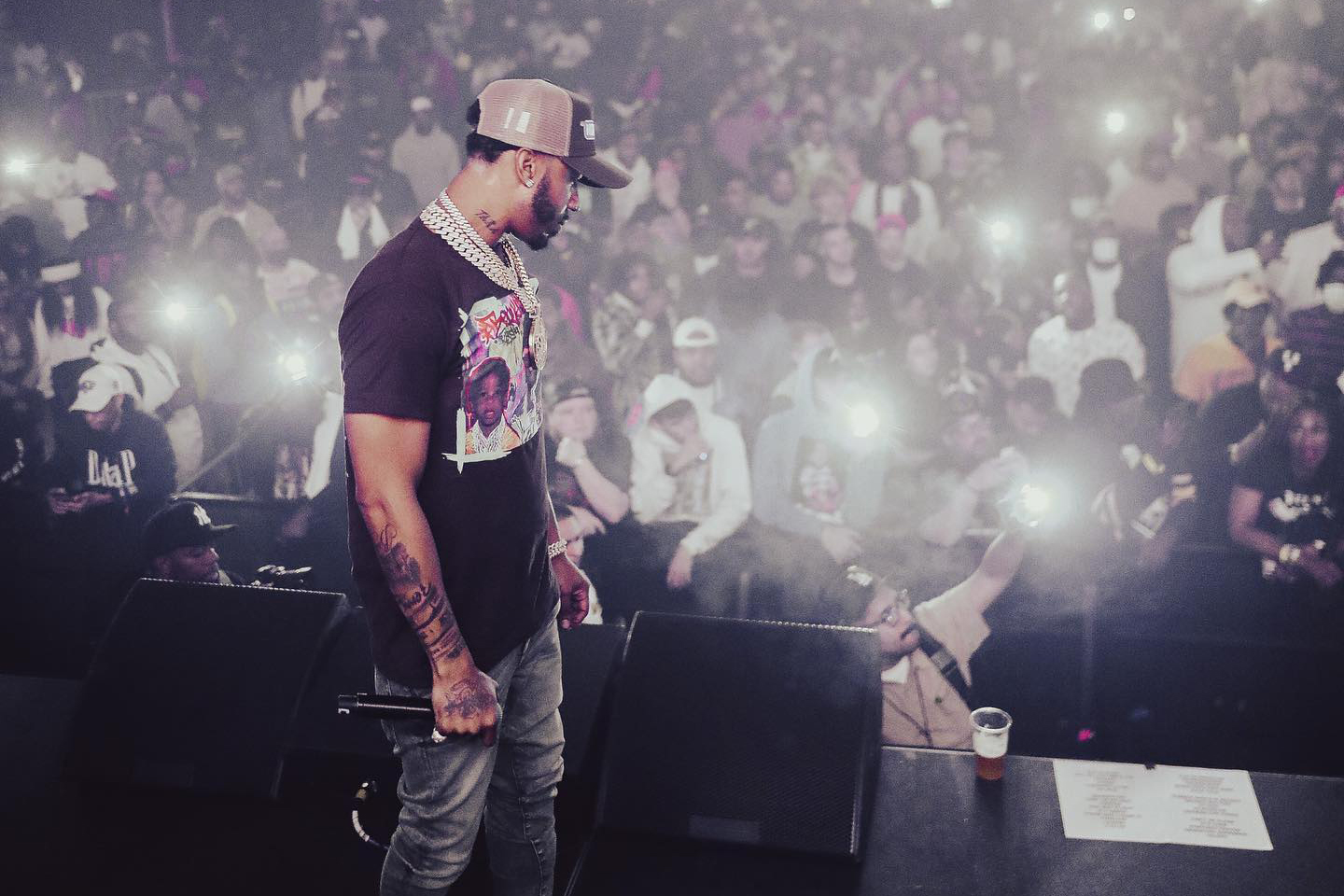 If we are going to be honest, this album is my most anticipated for the year 2022 (until Pusha T’s singles were released.) Out of the three members that make up the Griselda crew, Benny The Butcher is the more palatable of them. That doesn’t mean he’s the one that could go mainstream or anything of that nature, but where both Westside and Conway The Machine can be rough around the edges in some cases, Benny is the one that can bring the best of both worlds. Where he can still be gutter and grimy in his content but not too grimy to where artists like Lil Wayne and Big Sean can come into his world and hold their own. When Burden of Proof was released in 2020, he showed that he can still deliver what we have known him for thus far, but with the help of Hit-Boy, be able to apply that to cleaner, more polished production.

So, when Benny found out that he signed with Def Jam, I was not worried about it (unlike my co-host). Because if we learned anything from their crew album, WWCD, Westside’s Who Made the Sun Shine, and Conway’s latest album, they know how to play the system. However, before we get there, we need to get this Tana Talk out. Can Benny deliver on the hype and what made Tana Talk 3 the underground classic it is? Let’s see with Tana Talk 4.

1. Johnny P’s Caddy
Featuring J. Cole; Produced by Benny the Butcher & The Alchemist
Is it premature to call this the rap track of the year? Classic Alchemist production, the sample resonating throughout the entire track, with Benny and J. Cole coming at necks with the quotables.

They wanna know what I brought to Griselda, I say, “Validity”
They askin’ “What work y’all niggas put in?”, I’m like, “What didn’t we?”

Of course I’m tryin’ to revive a sport that’s dyin’
But the guns and the drug bars that y’all rely on
Got these nerds thinkin’ that you niggas hard as I am
But that just mean I ain’t as comfortable as y’all with lyin’
Stretchin’ the truth, know I never stress in the booth
They feel the pressure, me I feel like I just left the masseuse
Effortless, how I’m skatin’ on these records is proof
I put your favorite rapper neck in a noose, never lettin’ them loose

This song has yet to leave the playlist and not to take away from Benny, but it just makes you wonder how dope an album from J. Cole would be if he would bring in producers like Alchemist to handle the production. Great, great, GREAT way to start the album off and sets the bar high for Benny to maintain the momentum throughout.

2. Back 2x
Featuring Stove God Cooks; Produced by Beat Butcha & Daringer
Daringer and Beat Butcha come in on some Wondertwin powers ACTIVATE! type stuff. Benny comes in and does not let up on these rappers, going from lyrically flexing to flexing for real. Stove God brings everything together with an animated hook and an even more animated verse. Imagine him and Westside doing a tape, that will be hilarious throughout. Dope track and carries the essence of the last Tana Talk over to the new.

3. Super Plug
Produced by The Alchemist
This is vintage Alchemist. I’m going to be saying this a lot during this review. That piano loop coalescing with the drums is just magnificent and creates that perfect backdrop for Butcher to wax nostalgic on his past. I have had this in the playlist since it dropped and it has yet to leave. It probably won’t leave, because this is both Benny and ALC bringing the best out of each other and creating street magic. Best track of the song.

4. Weekend In the Perry’s
Featuring Boldy James; Produced by The Alchemist
I can understand what people say sometimes with Alchemist beats kind of sucking the air out of the room and at first, I felt the beat was too repetitive with the chipmunk sample kind of taking more precedence over the song. However, once you start to listen and you get rid of all distractions, it all comes together. Benny is relentless in his verse, carrying the energy of the first track, bragging about all that he has accomplished, and putting pressure on his opps.

Boldy James can be an acquired taste with his monotone flow, but he compliments the track with his own style (hell, all the projects he and ALC have done together, he better had come correct.). The song has definitely grown on me with more listens and time.

5. 10 More Commandments
Featuring Diddy; Produced by Beat Butcha & Daringer
It takes a lot of guts to make a track that lives up to the classic that Biggie whipped up with DJ Premier all those years ago. Not that this is trying to recreate it, but this is an updated version with Benny dropping gems for these kids and warning them to level up with their mindset or become another one of those fallen soldiers telling war stories. Of course, Diddy has to talk throughout the track, but it makes sense. Great job here, paying homage to the Black Frank White.

6. Tyson vs. Ali
Featuring Conway The Machine; Produced by Daringer
Nope. Nope, nope, nope. You will not make me choose the best verse here. Absolutely not. The track is great. Moving on.

7. Uncle Bun
Featuring 38 Spesh; Produced by Daringer
I wish that I was more of a fan of Benny and Spesh collaborative projects, because both get their Kiss and Styles on, weaving in and out of their verses, with Benny becoming more emotionless that he will even sell crack to a pregnant lady and Spesh will turn a brick to a family of white bitches.

38 Spesh is the East Coast Suga Free. Do with that what you will.

8. Thowy’s Revenge
Produced by The Alchemist
This track is good, but this is probably the first track that I am underwhelmed by just a tad. Mainly, because the seven other tracks that preceded this are just a lot stronger. Plus, I felt Alchemist’s beat didn’t have enough punch to get into it. Still a good track, but it just kind of takes the momentum off a bit.

9. Billy Joe
Produced by The Alchemist
This track is more like it. Those organs that are faintly beneath the drums almost create a horror type of vibe. The content wears thin a bit, but with Benny, he takes the Pusha T approach, by taking a topic that’s already been done to death and finding new ways to refresh the page.

10. Guerrero
Featuring Westside Gunn; Produced by Beat Butcha & Daringer
My friend and podcast co-host said this was a missed opportunity by not incorporating an Eddie Guerrero sample. Not only do the wrestling samples not work on Benny’s tapes, but y’all don’t need WWE breathing down your asses with uncopyrighted samples. Benny does something really dope by taking titles of his old songs (mainly from Tana Talk 3 and Burden of Proof) and creating an entirely new verse from them. I don’t see why other rappers don’t do that often. Westside…doesn’t really add much here. I guess it was for the vibe. Still, a dope song and another Daringer/Beat Butcha laced banger.

11. Bust a Brick Nick
Produced by The Alchemist
Vintage Alchemist…AGAIN! I might be overthinking, but this may be Benny reflecting on getting shot and how they took him out but couldn’t get the job done. Also, in case you think this Def Jam deal is going to change Benny, let these words tell you different…

No love songs, I kept it gangsta 24/7
You crying-ass rappers’ label should send y’all niggas to Ellen
Ayo, Butch’, let me holla at you
Wait, chill, chill, give me one second, nah (Hold up, hold up, hold up)
Y’all niggas like hoes, we can talk when y’all done beggin’
Now, let’s talk about this shit that I did to become legend
‘Cause the money not enough no more (The Butcher comin’, nigga), I want credit (Uh-uh)”
“And the race, I already won, I guess this lap was for victory
Doing songs with bigger acts and they tell me that’s going industry
But look back at my history (Look back, nigga) for the past five years
It’s like my status been tripling, I get back with humility

12. Mr. Chow Hall
Produced by The Alchemist
The final song is the victory lap, proclaiming that Westside’s vision came to fruition and all three of Griselda rappers are rich, simply by doing their thing and not bowing down to any industry politics or “shady” deals. Just like that, the album ends.

I had no issue in thinking whether Tana Talk 4 would be a dope project, the only thing that I wondered is how dope it would be. Every song on here is straight flames. Even the song that I thought was underwhelming, is still not bad, but “Thowy’s Revenge” was more of a segue to a second-half that could hold its own against the first half.

I remember not being the biggest Griselda fan at first and then a few listens to Tana Talk 3 and I knew that not only did I need this piece of art, but I had done myself a disservice not paying attention to the renaissance they were creating and the hallmarks of the music that I grew upon were filtered through a new lens and new vision. Once again, I have that feeling of needing this piece of art in my life, and in addition to that, Benny has raised the benchmark again of doing what you do best, updating your formula every outing, and still having it sound as timeless. These songs have not left the playlist thus far and every listen gets more and more enjoyable.

Am I really going to do this again so soon after Nas? I might have to. If we were to take the year as a whole and exclude Nas for coming out so late in 2021, Tana Talk 4 is the album of the year so far in the calendar year of 2022.