Prodigy – Return Of The Mac [Review] 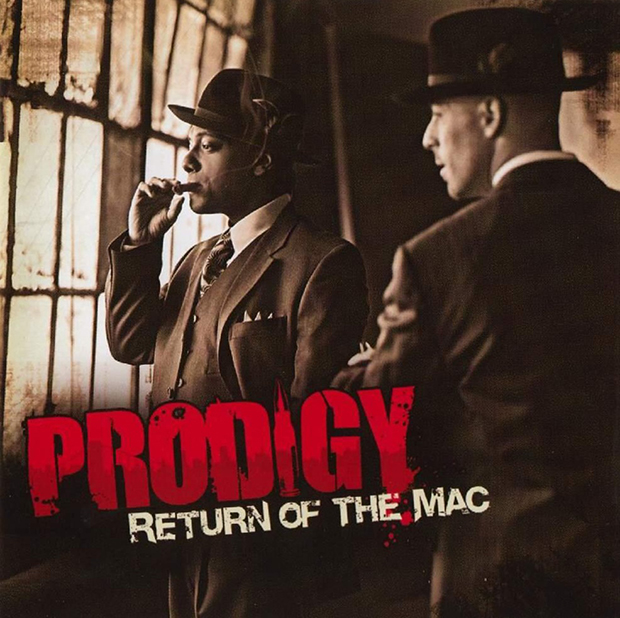 Prodigy returns to solo form with the follow up to his respectable H.N.I.C., providing us with Return of the Mac. Prodigy provides the listener with a completely self contained CD devoid of commercial beats and high profile collaborations. The entire soundscape of the CD sounds reminiscent of the glorious mid 90’s New York sound. This may in fact be the albums blessing and curse due to the fact that “real” New York shit isn’t exactly the most popular form of rap these days. Having said that, Prodigy maintains his integrity and represents New York and the lifestyle every second that it’s available to him. Let’s see if his shoulders are strong enough to hold up the New York sound so that the whole world can appreciate it.

1. The Mac Is Back Intro
Completely uninspired and brings nothing to the table artistically or pop culture wise. It’ pretty much a juxtaposition of song references to The Mack.

2. Return of the Mac
Prodigy starts the album representing New York to the fullest with a track that ironically samples Tupac’s voice. Ironic due to the fact that towards the end of his career, Tupac was a west coast representer and a devout enemy of Mobb Deep (Prodigy’s rap group).

3. Stuck On You
One of those clichéd song glorifying money, hoes, guns, etc…. Not much in terms of creativity.

4. Mac 10 Handle
Normally this would be considered a stand out track on the album but it suffers due to the fact that DMX used the exact same beat nine years ago and did a much better song. Despite this, Prodigy does an okay job of providing material to cover the beat with.

6. The Rotten Apple
Another attempt by Prodigy at sharing the pain and desperation of New York’s grime and crime scene. Nothing spectacular, just a semi-documentary view on living in the Rotten Apple.

7. Madge Speaks
Uninspired; really doesn’t add anything to the album in terms of art or creativity. By all means skip it.

8. Take It to the Top
One of the few energetic songs off the album. It does the necessary job of bestowing upon us the typical themes celebrating drugs and violence.

10. 7th Heaven
One of the few stand-out tracks from the CD. It’s actually well rounded (nice production/nice lyrics and delivery).

11. Bang on ‘Em
Everything about this song reminds the listener of that grimy, self deprecating production and word play that was birthed around 94′. It provides the listener indirect references to the era that Biggie rapped about being sick of life and wanting to commit suicide on the Ready To Die album.

12. Nickel and a Nail
Another Alchemist produced track. More predictable tough guy talk from Prodigy. What makes that track interesting that it comes from the perspective of the common thug and not the super baller.

13. Legends
One of the better songs of the album. The production, lyrics and delivery make the whole song feel authentic and sincere.

14. Stop Fronting
Another one of those songs where there is an heir of believability to it. It feels like and authentic look into a rapper/celebrities plight. It gives some insight to why they are so jaded.

Bottom Line:
The album is at best in the middle ground of current Hip-Hop offerings. It doesn’t quite hold weight and power in the era of super producers, ego maniacs, pop appeal and soap opera antics. Despite this, if you are looking for some unfiltered Hip-Hop that’s reminiscent of the era when Biggie spit, then this album may be what you need.