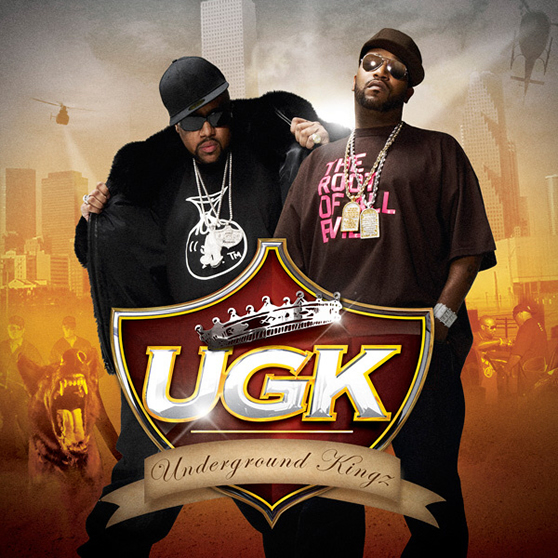 Can you believe UGK has been rapping for almost twenty years? Yea, there first album was the 1988 audio cassette only The Southern Way (Some say this album was released in 1992; I guess it depends on who you ask). In last few years, UGK has been elevated to legend status by the respect and homage paid to them by today’s newer rappers (T.I., Luda, Jeezy, David Banner, all Houston rappers, etc.). Over their careers, Bun-B and Pimp C have encountered almost every hardship to stop them from going to that next level and achieving more success such as label problems with Jive and Pimp C’s incarceration (Their classic Ridin’ Dirty is still their only album to go gold). But I guess every cloud has a silver lining. Bun-B kept UGK’s name alive by hitting up every guest appearance he could. He also made it a point to start the “Free Pimp C!” or “Free the Pimp” campaign that a lot of Southern artist followed. Now after many delays, the rightful follow up to Ridin’ Dirty is finally here (Come on, does Dirty Money & Side Hustles really count?). Let’s see if this double album lives up to the hype.

The album starts off as if UGK never took time off. “Swishas and Dosha” has the trademark UGK sound complete with Pimp C’s hook singing and the usual subject matter. The hit single “International Player’s Anthem (I Choose You)” featuring Outkast comes up next. While this is by far a great track, after Andre 3000 delivers what might be the best verse of the year, the song kinda dips in quality. Still a good song. The Pimp C produced “Chrome Plated Woman” sounds like a track from Ridin’ Dirty. Even though using cars as a song long metaphor for women is not on Nas’ level, it’s still welcomed. “Life Is 2009” featuring Too Short is a remake of Too Short’s 1988 “Life Is…Too Short”. The remake does the original justice but those who haven’t heard the original might miss the point. The first single off the album “The Game Belongs To Me” wasn’t as well received as “International Player’s Anthem” but is still a hood banger. How can you deny the hook?: “I got Bobby by the pound, Whitney by the key, DJ Screw by the gallon…” “Like That” (remix) has UGK in familiar territories when they get on that pimpin’ shit. While the beat is good, the hook is kinda lazy and you’ll be scratching your head wondering why the original is on the second disc. The Jazze Pha produced “Gravy”, while a good song, may suffer because of the similarity of the song that just preceded it. The pianos on the title track “Underground Kingz” at first sounds weird but grows on you as the song talks about what it takes to be UGK. “Grind Hard”‘s beat, featuring Young T.O.E. and DJ B-Do, is straight Texas. I sure Houston loving this one; I just wished Bun-B would’ve rapped. “Take Tha Hood Back” featuring Slim Thug, Vicious, & Middle Fingaz has UGK hooking up with production by The Runners to produce a more up to date sound. The Slim Thug hook is hard too. “Quit Hatin’ The South”, which samples Latimore’s “Straighten It Out”, basically continues what Outkast said at the 1995 Source Awards: “Quit hating on the South!” Even though I wasn’t feeling the sample, I really felt the message. “Heaven” is another “I wonder if there is a heaven for real G’s” song. The beat is average and UGK stock but how many time do we gotta do this? The last song on disc, “Trill Niggas Don’t Die” featuring Z-Ro samples Rare Earth’s “I Just Want To Celebrate” and is an okay way to end disc one. Z-Ro and Bun deliver good verses but Pimp C’s singing on the hook can be irritating.

The beginning of disc 2 still has UGK gripping with their past sins on “How Long Can It Last”. Even though we covered this on the last disc, it stills sounds sincere. “Still Ridin’ Dirty”, produced and featuring Scarface, is a good indication that the Southern veteran hasn’t lost a step when it comes to the tough talk. Scarface doesn’t rap here but gives a crazy hook. “Stop-N-Go” has Jazze Pha returning to the boards for the 2nd time on the album. The marching bands drums on the track are good but I glad this wasn’t the first single. When I saw that Rick Ross was featured on “Cocaine”, I thought it was gonna be your typical drug talk. But after listening to it I was only half right. They include some of the downfalls, but after all of Pimp C’s public disdain of trapper rappers you would think he would bring more of a message. Bun does do a good job of telling the listener how more about cocaine that just standing on the corner slanging though. UGK continues their unlikely paring with UK grime rapper Dizzee Rascal on “Two Type Of Bitches” (They also appear on Rascal’s “Where’s Da G’s”). They song is average but it still sounds weird when I hear Dizzee’s accent on a track like this. UGK continues the weird collaboration when Talib Kweli shows up on “Real Women” to actually praise…real women (They will also appear on Talib’s upcoming album). The track has shades of Earth, Wind and Fire and the result is actually one of the best tracks on the album. They switch back to regular gears with “Candy”. Yea, the song is about the candy paint on cars but the good simplest beat and Bun-B’s solo spot save this one. When I hear Jazze Pha say his tradenmakr “Ladies and gentlemen” in the beginning on “Tell Me How Ya Feel”, I almost skipped that shit. Even though this sounds like every other Jazze Pha track, it wasn’t garbage, it’s wasn’t for me though. Pimp C’s solo song “Shattered Dreams” could be the sequel to “Hi-Life”. At this point the beat sounds like you might have already heard it on the album but people still like come-up stories. The Lil’ Jon produced “Like That” finally answers my question of why the remix is on disc 1, the original sucks! UGK gives up some New York love on the Marley Marl produced “Next Up” featuring Kool G Rap and Big Daddy Kane. While on paper this sounds odd the results are an old school Hip-Hop lesson; no hooks just rhyming over a “Symphony” like beat. Okay, “Living This Life” is REAL sequel to “Hi-Life”. On what might be Pimp C’s most insightful, he raps about not going to church and getting a degree from Pen State (Jail fool!). The original version “International Player’s Anthem” featuring Three 6 Mafia (Title just “Player’s Anthem”) plus the Chopped and Screwed version are also available here but don’t compare to the single. Another bonus track is the Swizz Beatz produced “Hit the Block” featuring T.I. Complete with a hot MJG sample and a good T.I. verse it’s actually an album worthy track and makes me wonder why it was only a bonus track.

Bottom Line:
Wow, totaling at 29 tracks, this double disc can be a lot to digest. Did UGK break any new ground with this album; no, but they still delivered what they do best and stuck to a tested UGK formula. While they may not gain TRL access or do big numbers, long time UGK fans will rejoice. The chemistry between Bun and Pimp is still there and they still sound hungry. But as I said before, the length of the album is a lot (I can’t count how many times Bun called himself “Dick Cheney” or the number of Pimp C’s pimpin’ references). If you a fan or just curious to what the fuss has been about, this album will not disappoint. Port Arthur stand up!