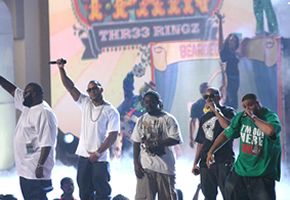 Well, I just got finished watching the 2008 BET Awards with King Jerm and Slik P. It was okay for BET; good to see Black people together at an award show without someone getting punched or stabbed (Just joking…kinda). I’m not going to recap the whole show, just the good parts and all the Hip-Hop/Rap parts.

On the pre-show, V.I.C. performed the remix of “Get Silly” and surprisingly almost all the cameos came out: Soulja Boy, JD, Bun B, Polow Da Don, & Unk, & (minus Big Kuntry, E-40 & Pitbull).  Because of all the guests, it was an alright performance since it was in the right time slot.

Young Jeezy performs “Put On” and brings out Kanye West for the feature. It looked like Kanye messed up a little bit and Jeezy kept it really simple. Kinda boring but I kind liked that song.

Mel B looked kinda sexy when she gave the “Athlete Of The Year”award to Kobe Bryant. That’s all I have to say about that.

Keyshia Cole brought out Lil’ Kim during her performance of “Let It Go”. When we saw her, it wasn’t a dry eye in the room. These were not tears of joy, they were because Kim looks like a monster now.

Lil’ Mama got robbed when they gave Missy Elliott “Female Hip-Hop Artist” award instead. Why was this even a category this year (Nominees: Eve, Kid Sister, Trina, Missy, & Lil’ Mama). I thought they were gonna throw Reece Steele in there from Miss Rap Supreme.

Soulja Boy got also robbed when they awarded The-Dream “Best New Artist”. Maybe it was based on the songs he wrote though.

T-Pain performs a medley of some of his bigger hits this year and brings out Flo Rida, Rick Ross, DJ Khaled, Big Boi, & Ludacris (“I’m So Hood”, “Low”, & “The Boss”). A lotta people thought this was Wayne’s award show. I think it’s T-Pain’s; he slo-mo walked to stage. Ha!

UGK wins “Video Of The Year” for “International Players Anthem”. Pimp C’s wife made an appearance.

T-Pain dominated the “Best Collaboration” category; he was nominated 4 out of 5 times.Kanye and T-Pain wins with “Good Life”.

Nelly performs “Stepped On My J’s” with Jermaine Dupri and Ciara and Slik P has a fit over all the different types of Jordans. He then brings out Fergie to performs “Party People”. King Jerm said Fergie kills him with her verse.

Lil’ Wanye closes the show (Isn’t that what was everybody was waiting on?). T-Pain plays hype man and they go into…”Got Money”? What? I waited for this? Okay, then Weezy goes into “Lollipop”; okay, I was expecting that. T-Pain reveals a “T-Wayne” shirt; I guess they weren’t playing about that collabo album. Wanye finally starts “A Milli” and hits us with two verses to close the show. It was an alright performance; at least he didn’t bring out the guitar.