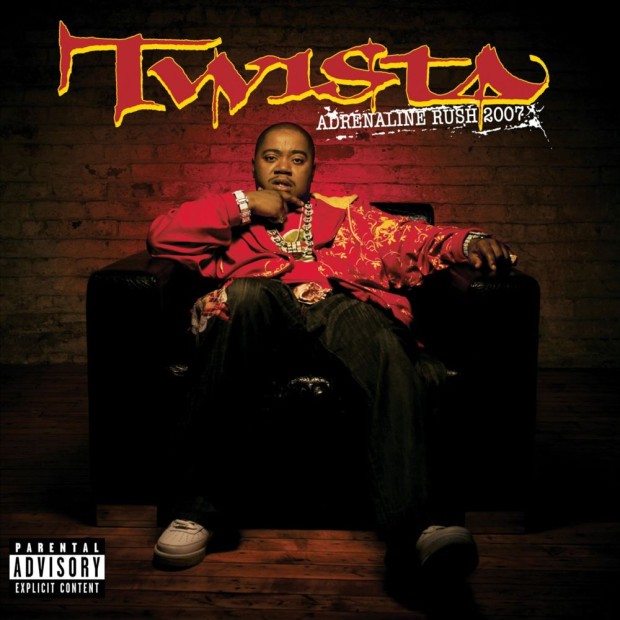 Yes yes! I know its been a minute since y’all muthafuckas heard from P-Body, and I know people been missing me. I been ducking from the FEDs, and also been busy as hell. Ok Ok Ok, lets get to the real business. Twista is back and trying to blow like the Chi-Town winds; we’ll see if he does a good job or not. This CD is the 10th anniversary of 1997 Adrenaline Rush, also we’ll see if this CD measure up to the original.

I had to skip the intro (“Adrenaline Rush The Saga Continues…”) since it was like alot of other CD’s I heard in the past, but the 2nd track on the CD “Charged” is alright. Not all that to me, it’s too typical and the concept is your regular speed rapping shoot’em up bang bang type shit. I see that screwed up chrouses is having a influence on a lot of people; please pay tribute to DJ Screw! Next track is another skit (“What T Is?”), I had to skip this as well. “I Ain’t That Nigga” is the 4th track on the album, and I like the beat. It’s gangsta, and the song is alright too even though its typical, the title gives you a idea about the song. Next track “Say Say” is produced by Jazze Pha, you can tell anyways by them annoying intros he throw on the tracks, and the track sounds like a Jazze Pha creation. Not a bad track, I like the beat, I felt like Cee-Lo could have been better with the delivery, and the concept of the song is typical too. “Whip Game Proper” with Lil’ Wayne, is alright. I like it but its not my favorite cut but its good for the club. “No Pistols” featuring Speedknot Mobsterz, hmmm I’m not really digging this song. I’m sorry but this song kinda sucks! I’m not really digging the beat much, and the concept of the song is average; about shooting niggaz and ridin out. Skip! “Phone” Skit, but I have to skip this too. “Love Rehab”, its alright, not bad, and I know the women are going to like this song alot. I like it and it’s mellow. R Kelly is one of the hardest working artist in the industry, dude is on a lot of shit! Good luck with the trial! “Seven Day Hustle”; damn this song is pretty wack to me. I’m not feeling this, and the beat is not all that to me either. “Creep Fast”; Once again I seen T-Pain name on somebody elses song, dude is very abbrassive to the mainstream and in high demand. T-Pain try to deliever the lines on a Twista level but isn’t quite that fast yet, but he tries. I like this beat and the song isn’t that bad. “Wrist Stay Rocky”; what’s up with these screwed up chrouses! I like screwed up chrouses but everybody can’t do them good though. Paul & Juicy J did their thing in the 90’s when it wasn’t popular. Im not digging this song, it’s your flossy type shit! Let’s talk about something that everybody can relate. Skip! “What Would Twista Do If He Wasn’t Rappin?” which is a skit. I skip this one too. On the next joint “Give It Up”, Neptunes aren’t like they use to be. That’s all I can say, I mean its alright but its your typical sex joint that we all heard before. Let’s get more balanced shit! They may play this at the club. Skip! “The Come Up”; this song is different. Twista raps are screwed and slowed down thru the whole song. I like the beat a lot. Its a alright song. “Ain’t No Hoes”, I like the track but the song itself is not all that to me. I’m not too fawn of it. Bone Thugs N Harmony is trying to help out on the track as well. Where is Bizzy? And free Flesh N Bone! “Pimp Like Me”, hmmmmm I don’t like this shit. Skip! Another skit (“Ya With It or Ya Ain’t”). Okay this is the last song “Trouble”; what a way to end off a CD. I’m not really digging this one either. The beat is nice but the chrous is really not hitting me at all.

Bottom Line:
With the sour quality of Hip-Hop albums in 2007, this CD is average. I don’t see myself bumping this too long. I was anticipating on it and it’s still not on the level as the previous albums. He’s missing Kanye West tracks right now! It’s not better than the original Adrenaline Rush. It needed another anthem like “Adrenaline Rush”; it didn’t have to be just like that joint but this CD was demanding an anthem and I didn’t catch it at all. Twista has a lot of talent; he’s pushing into his mid 30’s and he been doing this for years but I’m just not really feeling this new album at all. I’m honest as Abe! I was looking for something more different, creative, but instead I get the same stuff that everybody is releasing to the mainstream. The market is too saturated enough. Some of the guest appearances didn’t fit the album as well, but I guess they served their purpose for the young teenagers out there. I remember reading a article on Twista about how he had it hard with the labels, and everything. I was expecting to hear more story telling about his life and what he been through, but none of that. Sorry but I’m really not digging this album.