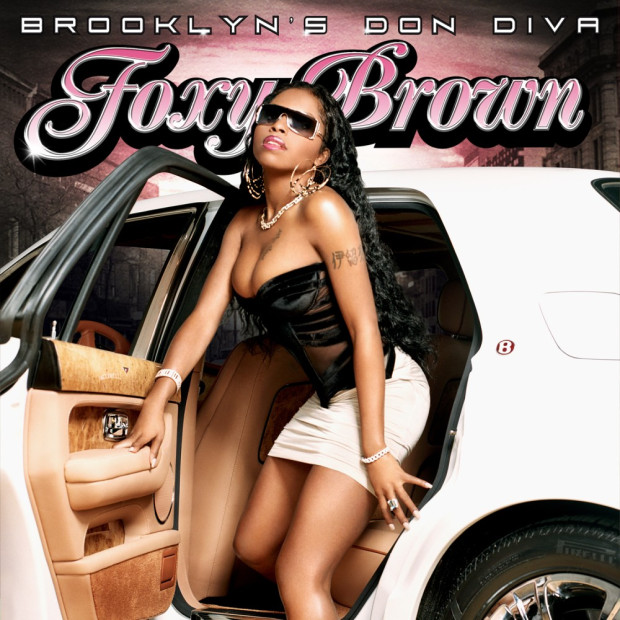 She was the FIRST female emcee to debut at number 1 on Billboard. Each of her released albums have reached gold or platinum status. She has been in the game (depending on what you consider IN) for 12 years (give or take a year). All those things considered; she is just around 30. Is she still as relevant as she was when she started? Did the 7 year layoff and all the other drama hurt her game? Let’s find out.

Brooklyn’s Don Diva
The backdrop and theme is about Browns arrests and time in the limelight outside of the studio. She seems to relish in, and why not, it’s the same shit the men do. Get arrested then talk about it. Hey, if it works, go for it. She does claim 20 million sold, I need someone to check that for me ’cause I don’t know how accurate that is for 3 albums especially considering your last one was only certified gold. The song isn’t bad, beat is a little too simple, but it’s ok.

We Don’t Surrender
Featuring Graph
“I keeps 3 9’s on me like I’m Gino Green.” Current reference that is simple but effective. Fox stands up on this one and basically lets mofo’s know she’s here, and what?! Graph contributes, but I wasn’t impressed with him on this one. The track is ok, but it sounds really canned. I would have loved to hear some more real instrumentation on this one.

We’re On Fire
Featuring Movado
This is when Fox is on her grind. Name droppin’ and syllable flippin’. I dig this one. Did you want Foxy to flip into patois in the middle of her flow on the second verse? Damn, shit sounded fly. Movado’s singing adds that extra thing to the song. One of the best cuts on the album. I do have to mention, she shoots at Jay again claiming she carried BK on her back…..and Sean (Carter) couldn’t do that. Yes, she went in.

Dreams Of Fucking A D-Boy
Featuring Jay Rush
I guess when there doesn’t seem to be any female rappers to contend with, you take on the men. She comes out with this story about, well, you read the title. Drugs, extravagant clothes, sex talk; yep, she seems to have the formula down. Someone must have taken some Lyfe Jennings stem cells (pause) cause one of his clones is singing on this track. It’s an ok song that features one of the more inspired beats on this album.

When The Lights Go Out
Featuring Kira
Um, okay, I guess this may have been made to be a radio cut or a left over track from Janet’s 20 Y.O. album. Is that good or bad? I don’t know. What I do know is that it seems out of place. oxy goes back to her first album with her sexuality in what would be a good song for the ladies in the club…or ladies on the stage.

Never Heard This Before
Featuring Dwele
This has GOT to be aimed at the radio…however, if they clean it up for the radio it may be a 2 sec. instrumental. Dwele doesn’t sound like Dwele (layers on layers of voice) but he still does his thing on this track. It’s a good song. As far as content, this song could damn near be called “I Been/Has Been” as she starts a majority of the bars with “I been”. Her objective is sot solidify her past, staying power, and position in the female emcee game. Wanna know, how she did? Check it out below.

Too Real
Featuring AZ
Hey, it’s a semi Firm reunion. Remind me, is that actually good or bad? I won’t go into that album here, but the return to some scratching and a nostalgic type beat are welcome. AZ rides the beat like AZ can, but I can’t help but notice he doesn’t bring it lyrically like he is known for…was it intentional? I don’t know, but he definitely kicked an average verse….on purpose…gotta be.

Star Cry
“If you never seen a star cry, I give you my life/Got my blood, sweat, and tears/Hip-Hop’s bad girl, 10 fuckin’ years.” The chorus plays before her first bar and when coupled with this beat, you get a lil’ more Inga with your Foxy. She talks about her troubles, P.O., paparazzi, controversy, etc. The funny thing is that the self proclaimed Don Diva says she gets press like Paris and Ms. Lohan, as if that is a good thing? Aside from that, she gets a little more emotional and lets us in; it’s a solid song and easily one of the better cuts on here.

Why
Guess what, that dude cheated. What dude? Whoever she is talking about. Essentially, it’s a story of how she upgraded this “lame fucka” only to catch him cheating…after she followed him. Eh…

She Wanna Rude Buoy
Featuring DeMarco
When the track came on, I was digging the lil’ island feel to it, decent shit. Then she started spitting and it sounded like “Dreams Of Fucking A D-Boy” as a remix….OH it is. It seems to be curiously placed in the middle of the album. That pretty much ruined the song for me. You can’t just change the title and the beat and call it a new song…then again, Jagged Edge been doing that for years. SKIP.

The Quan
Featuring Lady Saw
Keeping it dancehall with one of the illest, Foxy calls in Lady Saw for this one. Something about this seems forced or something. I am not sure if it’s because of her delivery or lack/presence of accent on some parts and not others. The song itself seems inconsistent and really, by the end of the song, you get tired of the beat. SKIP

Bulletproof
Featuring Lil’ Mo
Hi Lil’ Mo, I miss you. Ahem, crush aside, I dig this track. She talks about being in love with a “gangsta nigga”…her words not mine. I guess ladies really DO want a roughneck, even today. She brags about catching another case, bailing him out, and the way he takes care of her for doing that. I guess. Hey, “Ain’t No Nigga” right?

How We Get Down
Featuring Graph & Prinz
I think this one COULD have been a banger. A little heavier on the bass, more on that background melody (maybe even a guitar infusion) and you have a fantastic beat. Lyrically, smh. With lines like “I’m a gardner, I can plant fear in ya”, it seems to miss the mark.

We Set The Pace
Featuring Spragga Benz & Morgan Heritage
We get back to the islands with this beat and hook by Spragga, however, its horribly mismatched. The beat is soo chill and laid back that her assertions of greatness come off as misplaced delusions of grandeur (thanks Rick James).

The Quan (Hip-Hop Mix) [Bonus]
Featuring Lady Saw
I would go as far as to say, that this is the most solid track on the album. It sounds very dated, circa “Renee” from the Lost Boyz, but it’s arguably the best song on the album. Her tonality and delivery are damn near flawless on this one. The Reggae feel is blended perfectly with Hip-Hop and Foxy (???) “whoa” adlib is the stamp on this song. She did her thing on this one, finally.

Bottom Line:
This review took so long because I had to listen to it in line with the other CD’s. In today’s market, there are few female emcees that are really doing it in the industry so I had to kinda set the plate before I ate. I listened to all 4 (counting the unreleased Ill Na Na 2: The Fever) before doing this review. Of course not all at one time, but I had to have some point of reference, hell, it’s been 7 years. What I discovered is that they are all damn near the same. Does that matter or should that matter? Well, considering Ms. Inga started killing it as a teenager when she broke into the game, and she is now a grown woman, I would expect some (more) growth. She had a chance to do something special with a wide open field, and she just released the same album…again….with more pedestrian beats and a large dose of reggae and bitterness that start to repeat themselves on this very album. She has been working on Black Roses now for quite a while and hopefully, it can breathe some new life into her music and really assert her as the Don Diva she claims to be.