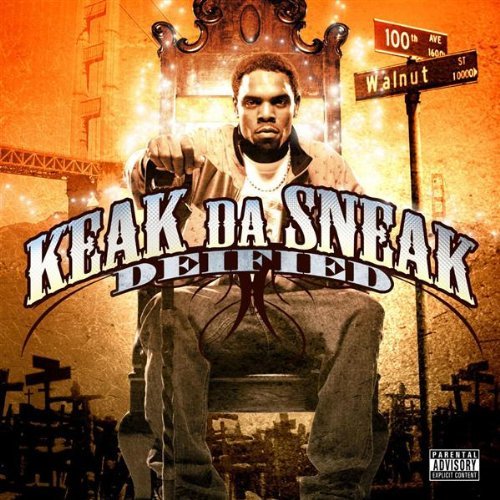 Outside of the Bay area in California, there may not be a lot of people that know about Keak Da Sneak or his music. The ones that do know about him is most likely from the commercial recognition he received the single “Tell Me When To Go” off E-40’s album My Ghetto Report Card back in 2006. It’s been two years since then, and I can’t say that Keak is more known now than he was before that single. Regardless, Keak is back with another album in 2008 entitled Deified. Will this be the album that makes Keak more known to listeners and fans alike or will it just be another release that goes unnoticed?

Intro
This is pretty much your typical “Intro” found on most rap albums with Keak Da Sneak talking and introducing himself over a beat. There’s really no need for this track on the album as it’s pretty much pointless. Plus, I can’t understand a word that Keak is saying because of his unusual vocal tone.

19 Dummy
Featuring Daz Dillinger
This track starts of with some west coast sounding production that fits well seeing that Keak is from the Bay area. Keak’s strange vocal tone makes it really difficult to understand what he’s saying over the track. Daz Dillinger is heard clearly over the beat and spit some average lyrics. He sounds comfortable over a track like this and does this track some justice.

Quarterbacking
Featuring The Jacka
If there’s one thing about the Bay, it’s that they are keen for creating terms that become popular and a part of everyday language. The term and song title “quarterbacking” might just be one of those terms that starts getting used more. Some heavy synthesized production is hear on this track that suits Keak and The Jacka’s lyrics nicely as they spit about rideing about with that 8-ball. This song is for the hustlers getting their “Petyon Manning” or “Tom Brady” on with that “ball” (8-ball).

That Go (remix)
Featuring Prodigy & The Alchemist
This is the first single off the album and a nice selection at that. This track features some very nice beat production that is straight bangin’. While Keak does his thing with the lyics, this tracks sounds more suited for Prodidy and The Alchemist as they ride the beat comfortably and sound more at home with it. This is one of the best tracks on the album so far.

All I Know
Featuring E-40 & Clyde Carson
Immediately following that track we’re right back with some hyphy sounding production that is sure to make those in the Bay get their hyphy on. This song has the potential to be the next single for this album if it has one. E-40, who has one of the most unorthodox flows in the rap game, spits some lyrics that are fitting to the track. Clyde Carson does a decent job with the rhymes he spits on the third verse.

Stunna
Featuring Lil’ Keke
The production on this track sounds like a blend of elements from the west coast and dirty south, which works in a way. This track is nothing much different than what’s heard in many rap songs today about being a stunner and having that dough. Keak and Lil’ Keke spit some average lyrics on this track, nothing really special from either one.

Hard Tops & Drops
Featuring Paul Wall & Scoot
The production supplied for this track is pretty nice, as it has that bounce that keeps this song moving and flowing. All three emcees did a good job on this track and sound like a fit with the production. Not much really wrong with this track, it’s one that people might enjoy greatly on this album.

Blurpt
Some pretty weird and bizarre production featured on this song with a lot of strange sounds and synths making up the composition. I have no idea what the song title or topic means with the word “blurpt”. Keak isn’t really saying much of anything on this song to really catch my attention, so this song would be a skip for me.

X2
Again we have another track with a lot of synthesizers and weird sounds making up the beat. This song, along with some others that have been heard are starting to sound the same, thus my interest is being lost with this album at nine songs into it. This track is similar to the previous one in that Keak isn’t really catching my attention with what he’s saying.

Nothing Without You
Featuring Messy Marv & Matt Blaque
As usual, no rap album can be complete nowadays without having a song for the ladies or dealing with relationships and this is that song for this album. The production on this song fits with for the type of song it is, but the same can’t be said about Keak on this song. His voice makes this song absolutely not work at all for him and he really sounds out of place on it. The hook works well on this song and makes it have more of an R&B feel and sounds like something that shouldn’t be on this album.

Oakland
Featuring Mistah F.A.B.
This is Keak Da Sneak’s song for his hometown of Oakland, and while the production on this song is nice, I was expecting something much harder with a west coast feel to it. This song is fair for what it is, but it’s not anything too special or amazing. Keak and Mistah F.A.B. do a decent job with the rhymes from them on this song.

Ass Chauffeur
This track has both some decent production and lyrics, but I can’t really get with it in being interested in the song. The hook on this song is pretty weak and that really sums up this track as a whole in it being an average song. This song is a skip for me and won’t be getting much play.

Playa Like Me
Featuring Too Short & Celly Cell
Another track with some average sounding production on a song about being players and pimping. Out of the three emcees featured on this song, Too Short comes out having the best verse and sounding the best/most comfortable on the track. Nothing really special about this track, as it has been done plenty of times before and much better than this.

N Fronta Ya Mama House
This track sees us getting back to some true west coast sounding production that fits Keak much better than the other types of production that have been featured on this album. With this said, the production is still a bit average sounding and doesn’t sound like it took much to compose. Once again Keak spits some average lyrics on this track that don’t really grab my attention.

Go Dumb Go Stupid
We are met with some straight hyphy sounding production on this track on a song that really has no meaning or purpose. This song is pretty much described in the title, as it’s both dumb and stupid. This song gets a skip from me, as it makes me feel that I’m going to go dumb and stupid if I keep listening to songs like this.

Going Going Gone
The production on this track features some more of the west coast/dirty south sounds that we heard earlier in the album. I’ll admit that this song does has a bounce and catchy feel to it, but that’s about it as this song features some decent rhyming from Keak.

Stock With Game
This track features some different sounding production that still contains that west coast sound and feel. Much like the previous track, the beat has that bounce to it, but it comes off as just an average song that sounds very similar to a lot of other songs on the album.

Her Name
This song features some nice production on a track about Keak trying to get at the ladies but he doesn’t know their name. It’s funny that this song is about that because the chicks probably don’t know his name either, so it’s a two-way issue. I’m not really feeling this track too much and will not probably be listening to it that much. Nice try Keak, but Alica Keys already did this song (“You Don’t Know My Name”) and did it much better.

I Get It In
Featuring Chops, Bra Heff, & San Quinn
This track features some of the most lively and active production, and it’s pretty good. The beat on this track is a nice change of pace to the album and is refreshing. Even though the beat is good, I can’t say the same thing about the emcees that are featured on the track. They all spit some decent rhymes that aren’t really anything to take notice of.

Who Started This
This is another track with the west coast/dirty south feel to it that sounds nice. Keak spits some average rhymes on this track and that makes it just an okay song.

Drop It On Tha 1
Featuring Lil’ Retro & Yaberation
Some different type of production featured on this song, but once again Keak isn’t spitting anything out of the ordinary that you’re used to hearing from him. Lil Retro (wtf – the name?) and Yaberation (again, wtf with the name) spit some decent rhymes alongside Keak’s.

On Citas
Featuring Paul Wall & Chingo Bling
This track features some nice production with Paul Wall outshining both Keak and Chingo Bling on this track. This track is nothing really different as we have heard a track similar to this earlier in the album.

Super Hyphy
As stated by the song title, this track is strictly made for the hyphy fans. This production on this track is fitting for the type of song it is and is sure to have hyphy fans getting their dance on. This track has the potential to be a future single and I don’t know why it was placed as the last track on the album. It should have been placed much earlier in the album.

Bottom Line:
My final thoughts on this album are pretty simple…it’s too damn long. At 23 total tracks, this album wears the listener down pretty quickly as most of the songs start sounding the same with similar beat productions and mediocre lyrics throughout. This single album is about the same length as a double album, and an album of this quality really doesn’t need to be that long at all. I started losing interest in this album very early on in listening to it and it being so long didn’t really keep me interested; it had me wondering when the end was gonna come. Other than the album’s length, Keak Da Sneak’s voice really made this album difficult to listen to and follow. I could barely understand what he was rapping on most of the tracks and his annoying voice didn’t want to make me keep listening. With a voice like that, it’s better for him to keep his albums short in length to possible keep the listener’s attention. There was really only one song that I liked a lot on this album in “That Go (remix)” as many other the other tracks were either average or poor. I think that this is an album that only hardcore Keak Da Sneak fans will enjoy, and it might garner some new fans that haven’t listened to Keak before. This isn’t an album I would recommend purchasing, it’s probably better to buy select tracks from it off iTunes or something.