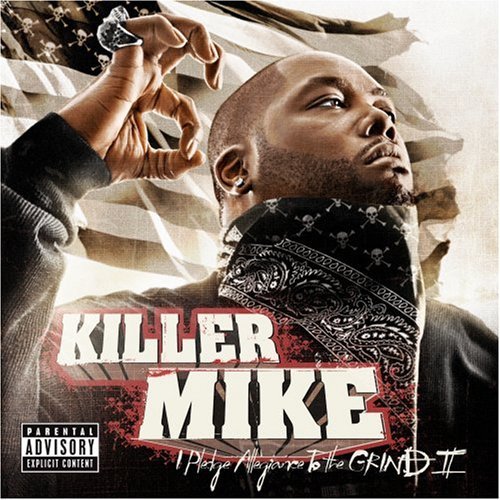 From being protégée of Outkast to an independent artist, Killer Mike has always been pretty true to the first part of his name. Killer is how the mic typically sees him. His distinctive flow, cadence, and delivery teamed with his lyrical sharpness have garnered him respect and the ability to rhyme about politics and the grind without losing any love. Let’s check out his latest offering, I Pledge Allegiance to the Grind II.

Intro
Produced by Brandon Bailey & Brandon “Tec Beatz” Sewell
I commend Mike for what he says in this intro. However, the part about it not being a typical rap album is a matter of opinion these days. That aside, he spits some truth and someone will really use this as motivation to hustle and better their current situation.

10 G’s
Produced by Young Sears
A Biggie sample brings us the hook over some dramatic church organ chords that relent when the rap starts. Killer lets you know where he’s been, both in his lifetime and in the music biz. “Makin’ underground money/Cause I’m on my on my grind dummy/Niggas ask me where I been/Makin ‘ fukin’ money dummy/Used to chop that grass homie/Now I ‘m choppin’ syllables/And them crackas cut me checks and pay me some residuals.” The track would benefit from some deeper and harder bass, but overall, it’s a solid song.

Can You Hear Me
Produced by CKP
More motivational music, “This music is the soundtrack to your success” quips Mike on the intro. The 80’s lend us another sample and some rock infusion here. This shit is well done but it’s been done quite a few times before. The overall production is dope and the song comes across well even with a T-Pain type hook. Mike is up to his frenzy flow tricks as usual, as he reminds us, he stayed on his grind, and now he’s a winner. I’d say this one is average to good.

2 Sides
Featuring Shawty LO; Produced by Wonder Aillo
Song 3 is just as hard as the rest of the catalogue as Mike reps his hood and city and questions those who claim to be from his area…but he’s never seen them. “Well Gotdamn! Must be 2 sides!” is seriously funny even though Shawty LO is sincere as he hits us with the hook. Care to guess who the target(s) are for this one? They may want to answer this blatant lyrical chin checkin’. This is one of my favorite songs on the album.

Pressure
Featuring Ice Cube; Produced by Tha Bizness
It Kicks off with a poignant intro of Farrakhan speaking some heat about knowing who you are as a people. The track starts and while simple, it’s definitely a head nod track. Killer opens the song with “Muthafuckas/I just bought some new chuckas/The old ones bloodied up from stompin’ out most suckas.'” Cube goes hard as hell on a track that fits his style perfectly and picks up where he left off on Laugh Now Cry Later with The same muthafuckas wanna gank you/Because they hate you and the pussy that you came through/Can anybody tell me that it ain’t true/That these muthafuckas’ out to hurt you. Both vets keep the heat coming on their last verses and basically murder this one. This song is another winner.

Big Money Big Cars
Featuring Chamillionaire and Messy Marv; Produced by Cutmaster Swiff
This is a straight up shout out to the South, Geto Boys sample and UGK influence on this track. The track is nothing but that southern syrup and bounce coupled with background ‘hey’ chant. It’s hard to ignore this one. Messy Marv steps to the mic and does his best Jeezy impersonation complete with ad libs. Chamillionaire steps in and picks the song back up with his cadence and flow all over this one. It’s almost too little too late to repair the damage done to the middle of this song by Marv, but Cham saves this one to average.

God In The Building
Produced by The Cancer & Kidz With Machine Gunz
I really have no words. This is THE best song on the album and will probably be in my top 10 of ’08. This song is perfect from top to bottom. Production is flawless, lyrics are raw, and the hook is perfect in execution and concept. “To get to heaven I will raise hell / but before I am a servant in a white heaven I will rule in a black hell.” No shock, song seven strikes again. I’m sure we will hear a lot more from this production crew after this gem.

Super Clean/Super Hard
Featuring 8Ball & MJG; Produced by Tyrice Jones
How do you follow up that song? Easy, by getting some Southern Legends to flow over a little Al Green sample. I hate the damn word, but this is a swag special. Concept is simple, flip the word “Super” into your flow as many times as you can while kickin’ your regular lyrical glitz and game. I can’t wait to blast this one around the park on Sunday. The track is so South, can’t hate it if you wanted to…but you won’t. This one is dope.

Woke Up This Mornin’
Produced by Chris Crak
How can you not like this song? It’s laid back weekend, slow cruisin’, summer jam music. It puts me in the mind of Devin the Dude with the dro and sex lyrics and fun wordplay overall. The track is light hearted and Killer does a great job of slowing down his pace to groove with this one. Good song.

Bang!
Produced by CKP
First things first, the bass, chant, and clap on this one are dope…the rest of this 8bit sounding track is horrible. The hook is not a good look at all with some tired sounding chick layered to sound robotic. Mike doesn’t offer anything new here and even his sharp lyrics and delivery can’t help this one. SKIP…unfortunately, because the bones of this song are good.

Grandma’s House
Produced by X.P.
I swear, that “hey, hey, hey” chant just gets me going. Anyway, the track itself is average, nothing complex or difficult about this one at all. Killer Mike tries his hand at singing on the hook and different parts of the song, but it’s done comically. He sings in a nursery rhyme type melody “I don’t give a fuck I do a thou-ou then I’m up and out/Then break that shit and weigh that shit/Distribute shit out Grandma’s house.” Mike gives us some story telling, typical dope tales here. He keeps it Mike with lines like “…you should see the fat, black boy today/Wear more Polo than Kanye/Marry me a big booty cutie like Jay…” The idea of spittin’ this one around the idea of sneaking and selling dope out his Grandma’s house is a little different concept on what has become a common theme on most albums. This one is a solid song.

If I Can’t Eat Right
Featuring Gangsta Pill & Rochelle Fox; Produced by Young Sears
Young Sears takes a page from Weezy and lets the beat build on this one. It starts off simple but as the song goes on leading to the hook, more parts are added. Then after the hook its stripped back down and the process starts again. I dig the concept of that a lot, and the execution is as good as the idea. Our first verse is Mike who puts a seat on the track and renames it Huffy. He ends his first verse with “She said I’m pretty Michael I can have any guy/I told her damn right, girl you are stunnin’/But I’m rich bitch I can have any woman.” Pill follows him up and does an okay job. He’s followed by Rochelle who offers up an average verse. The song ends up average to a little below average.

I Gotcha
Produced by Smiff & Cash
There is nothing special about the track, pretty simple all around but decent at the same time. When I first listened to this song, I turned up my nose at the use of spiritual leaders names with the subject matter, but if you pay attention to it, this shit is flat out creative. He lets us know this is street gospel, and he delivers. I don’t know that the track and the song are the best match, but the concept of the song is kinda tight. Lyrically, this song is a lot better than is comes off.

I’m The Shit
Produced by B. Don
When I read the title and heard the strings sing on the guitar on the lead in, I was excited. That soon passed. I appreciate the song being different, but the track gets old very fast. Lyrically, Mike has said this statement without blatantly saying it, but he offers up some sub par verses here, including talk of making the pussy burp. This one is not nearly as dope as the title would have you expect.

Can You Buy That
Produced by Drugs
For the second time in a row, we get a less than mediocre beat and now even Mike sounds tired. His usual bouncy flow and exuberant delivery are gone here, he does rhyme fast, but he’s muffled and sounds bored. The beat is just as exciting and makes this song skip worthy.

You See It
Featuring SL Jones; Produced by Brandon ‘Tec Beatz’ Sewell
Make that 3 times in a row. This beat literally drags and even with the up-tempo background support, the heavy chords drag the overall feel of this one way down. SL seems to have been lulled to sleep as well as his verse seems, at times, slower than the track. Mike, has a little more of his wordplay here, but his delivery is the same as the track before this one. I won’t say skip, but it’s not a good song either.

Good-Bye (City of Dope)
Produced by Malay
The beat and overall production pick up a bit on here. The parts, while still simple, work well together to give us a good beat. The hook is okay, some singing of “Kiss yo’ ass good-Bye” pipes the guy that sounds like a young Nate Dog in training. Mike paints us a picture that starts off sounding like a scene from New Jack City and ends almost as wild. He ends the album on an average note.

Bottom Line:
Most of the criticism about the first offering is that Mike could have cut out a few tracks and had a lot better album; I feel the same way about this one.  I am not the one to complain (often) about getting a lot of music on a CD, but if you do bless us with a longer CD…then bless us.  The first few songs (outside of the interlude) are probably where he could have stopped and had a really good album.  His high points outweigh the bad in the first 2/3rds or so, but once you get past that, it starts to drag and production value starts to drop pretty sharply.  You can literally take half of the album (8 songs) and make a really good EP, the other 8 should be “lost.”  I would rate the album higher if I could just rate half of the album.