Vibe’s Best Rapper Alive Tournament, Part 3: And The Winner Is… 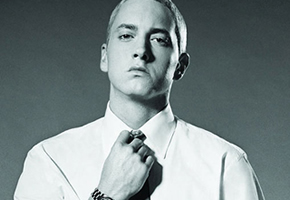 What’s happenin’? Last time I told you about this tournament, I told you it had come down to the final two competitors: Jay-Z and Eminem. While I didn’t agree with the way the tournament was being run with all of the crazy match ups going on (Ludacris vs. Young Dro), and all the people who shouldn’t have even been in it in the first place (Soulja Boy, Diddy, Shawty LO, etc.), I actually couldn’t wait to see who would win this tournament. Would Eminem “Renegade” Jay-Z like he did on The Blueprint, or would Jay prove he’s a much more consistent artist? Well, enough beating around the bush: The winnner is…Eminem. Say what!?!

That’s right, Eminem took home the crown in a shocking landslide: 69% of the vote to Jay-Z’s 31%. DAMN! It’s “Renegade” all over again! On the real though, I’m a little torn here. I really like both of them: while Jay has more experience and has a more polished flow, Eminem takes his time with his album; he released two classic albums and a near-classic album all in a row and won the Grammy for Best Rap album three times in a row, something only Kanye can lay claim to. Still, it was kind of shocking for Em to win by that much: his last album came out four years ago. Jay has released two albums in that time, with BP3 coming this year. However, maybe that’s what buried him: Kingdom Come was listened to by everyone and was only decent, and American Gangster was near-classic but listened to by hardly anyone.

While I’m kind of with Jay on this one, I do have to say that Eminem is an accomplished artist: when he first came out, I was kind of skeptical because, and I’m not even gonna front on this one, he was white. But when people saw Dr. Dre cosigning him, then they started paying attention. While you’d think that Eminem’s coming up into the game would cause a surge of white rappers to join the game (I count two: Lil’ Wyte and Asher Roth), that wasn’t the case; this was, I think, good for him because it continued to place him in a league of his own, and he continued to make amazing music. So even though I was betting on Jay, I can’t say Em doesn’t deserve this.

And so with that, the Vibe Tournament comes to a close, thank the Lord. Rakim and KRS-One probably don’t even care that they weren’t even nominated now, seeing how weirdly everything turned out. While I like Vibe as a magazine, I don’t think that anyone can tell me that this tournament wasn’t fucked up. What do you think?