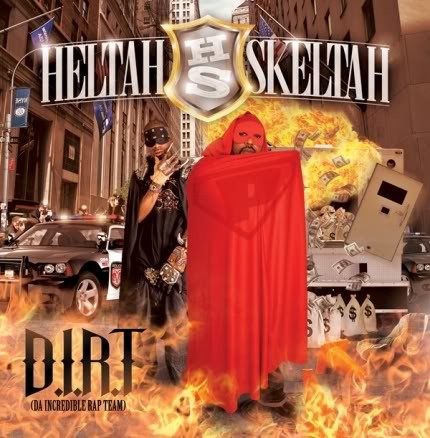 Yeah, I know the album cover is just fucking ridiculous. But name one Hip-Hop head who hasn’t been waiting for this album to drop. Forscore and 12 years ago, Heltah Skeltah released an equally goofy album cover, both rappers hanging from the sky… in Twista Kamikaze fashion. As goofy as that album cover was, the music inside was gritty as hell…if you haven’t yet heard Nocturnal, it should definitely be on your to-do list of Golden Age Hip-Hop. For those who have heard Nocturnal and Magnum Force, this is obviously an album you had your sights on for quite some time. It’s been ten years since Heltah Skeltah has released an album. Don’t get it twisted though, both Ruck and Rock have been grindin’ out street singles on a consistent basis for those 10 years. In fact, they joined a Hip-Hop supergroup known as Boot Camp Clik, which is them, Buckshot, Smif-N-Wessun and O.G.C. It is kind of like the East Coast’s version of the Four Horsemen. Combined with the critically acclaimed first two albums and the huge underground of the Boot Camp Clik, this album has got crazy hype attached to it. I only wonder if it deserves the hype…

1. Intro
Featuring DonRocko, BummyFlyJab, & Alkatraz; Produced by D Dot
Imagine what’s happening on the album cover in song. It’s just a messy mix of death threats, bullet shot sounds, and random yells of “Heltah Skeltah” or “Boot Camp Clik”… and then Ruck (I think) decides to spit a few bars at the end. I guess it’s alright for an intro, but I would skip it.

2. Insane
Produced by Marco Polo
I wasn’t really ready for this track, but after about one minute I got really into this track. Marco Polo does a great job on the instrumental, especially with the dark, eerie mood he provides, and also with the “insane” sample. Heltah Skeltah rips this track a new asshole with their lyricism; I was really impressed.

3. Chipmunk 3000
Produced by Fatim
I don’t have much to say about this track. I wasn’t really feeling it at all.

4. Everything Is Heltah Skeltah
Produced by Ill Mind
Definitely feeling this track. “Fuck with Charlie Manson, tell you everything is Heltah Skletah”. This beat is very simple yet it fits almost perfectly to the rhymes. The lyrics are great, and it’s just a great song overall… I repeated this song 3 or 4 times.

5. D.I.R.T. (Another Boot Camp Clik Yeah Song)
Produced by Khrysis
“You so sub par/You subleasing/Subway sandwich eating, sucka type/Sucking your teeth in/Substitute the subliminal shots with some shit that sounds like the sub woofer when it go Rah Rah” Need I say more? This track fucking bangs! Also look for the same sample that Kanye West used on “Wouldn’t Get Far”.

6. So Damn Tough
Featuring Buckshot & Ruste Juxx; Produced by Ill Mind
Another raw-ass instrumental and some more grimy, gutter rhyming. The lyricism is amazing on this track… and watch Buckshot outshine everyone on this track.

7. WMD
Featuring Smif-N-Wessun; Produced by M-Phazes
Easily the best song so far. The Smif-N-Wessun verses are AIDS sick! Ain’t no fucking with this track.

8. That’s Incredible
Produced by Double Up
The beat is really boring, I was hoping for more from Double Up. And when Heltah Skeltah gets on the mic their verses are real weak. This is a skip for me.

9. Ape Muzik
Featuring The Representativz; Produced by M-Phazes
If this song was acapella it would sound like some 90’s lines. I liked The Representativz verse’s, but Ruck’s verse was ill as hell. The beat sounds like a Dipset freestyle instrumental (in the best way possible of course).

10. The Art Of Disrespekinazation
Produced by Khrysis
“Fuck rap riddles, get shells yo/I’m a beast, you a bitch like tickle me Elmo”…. You gotta check this song out, cuz it’s propane fire.

11. Hellz Kitchen
Produced by Evidence
This beat is straight fucking horrible. If it wasn’t for the track-saving lyricism I would have instantly skipped it. The lines on here are crazy, but the instrumental is what ties it all together, and it’s nearly non-existent.

12. Shmack Muzik
Produced by Sic Beats
This song is the opposite of the above one, you’ve got an appropriately sick beat… only the rhyming is boring and monotonous. The hook is terrible too (one of the very few times I can say that about a Heltah Skeltah track).

13. Twinz
Produced by Ken Ring
I’m not really a fan of slow beats and quick flow… but I guess if that’s your thing, you will like this track. Once again Ruck saves this track from obscurity with his great verse at the end. But it’s too little too late.

14. Ruck N Roll
Produced by Stu Bangas
Who hasn’t freestyled over this beat yet? Seems like it was only Heltah Skeltah, and now that they’ve done their freestyle on this track maybe we can get rid of this instrumental already. Not exactly the ideal way to conclude your return to form album…but it’s different strokes for different folks.

Bottom Line:
This album was everywhere, from great songs like “WMD” and “D.I.R.T.” to what were they thinking like the “Intro” and “Chipmunk 3000”. I found much more successes than failures, but at the same time I had no clue what the hell I was listening to way too often. I respect that Heltah Skeltah is trying to be “different”, but they sound like jackasses just like the album cover at times. I say this has about six or seven tracks that you should hear, about five or six that are average, and then two that nobody should waste their time on.