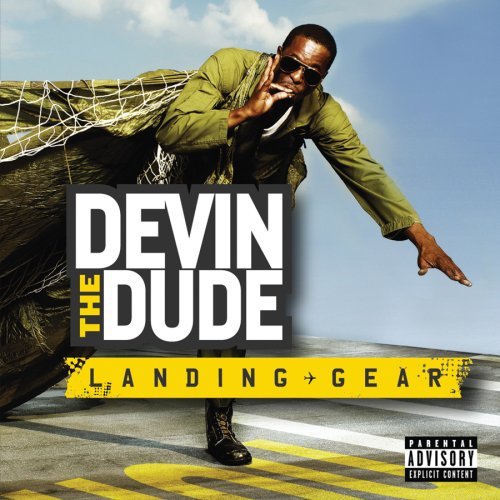 How can someone who has worked with the likes of Dr. Dre, Jay-Z, R. Kelly, Nas, & Outkast still fly under the mainstream radar? Well, I’m sure Devin The Dude would also like an answer to that question. While he seems to be a favorite within the industry and be part of high attention albums, when it comes to his own work, Devin seems to never get the light he deserves (Remember last year’s dope Waitin’ To Inhale?) . But don’t feel sorry for Devin, if his music is any reflection, getting ignored by the general public hasn’t slowed down his favorite vices of weed, liquor, and women (That’s one of the things that stands out about Devin). He may rap mostly about pussy/weed/women, but it seems genuine, creative, and in good fun. Well, it seems Devin is at it again as he releases his 5th album (And one of the year’s livest/funniest covers), Landing Gear. Let’s see if Devin continues to deliver his own brand of smoke induced Hip-Hop?

1. In My Draws
Produced by Rockstar
Over a slow bass track, he covers subjects like sexing lesbians, admiring his stocky weed jar, and watching hockey. It’s classic Devin; he’s not reinventing the wheel, but it’s a good intro for listeners.

2. I Can’t Make It Home
Featuring L.C.; Produced by Cozmo
Here, Devin has too many shots of Patron, leaves his girl’s house, and is caught driving intoxicated by the law; “As far as the weed/I think he kept it and he smoked it/But he got me on a DUI/And I’m on some broke shit”. This was probably the first song I originally heard off this album. This time Devin calls in someone to handle the R&B singing (Well, not all the way). The song is good quality and laid back like most of Devin’s stuff.

3. Thinkin’ Boutchu
Produced by Domo
The beat on this one seems off a little; maybe it just me. Here, Devin explains that even though he’s smoking weed and playing in the streets, he’s thinking about his girl. It’s a okay track, it just didn’t grab me.

4. Let Me Know It’s Real
Produced by C-Ray Sullivan
The production on this track seems simple, but it gives Devin room to sing/rap more of his freaky tales; “I know it’s soft and wet/Warm and wide/Wanting this bone inside”. Of course he sings the hook (Like on the last few tracks). It’s not great but it fits on the album.

5. El Grande Nadgas
Produced by C-Ray Sullivan
For the non-speaking Spanish readers, “El Grande Nadgas” = “Big Booty” (You can look it up, but the song says it all). Yeah, this time Devin is trying to get at a Spanish/non-English speaking female but the language barrier is stopping him from telling her he likes “the way her booty curves”. It’s as silly as it sounds, but I was singing the catchy hook to my girl all yesterday.

6. Me, You
Produced by Destrukshon
Another song about hooking up with a woman? Yeah, I know the subject matter may get tiresome to some, but previous listeners already know Devin covers this subject extensively. This is another track that really didn’t grab me. The beat was okay, but just that.

7. Highway
Featuring Dee-Rail; Produced by Rockstar
“I hit the highway flipping on vogues, ripping up shows, kicking them flows, and I end up with my dick up in hoes.” Well, its not completely different from what’s already been said, but it’s a start; it’s about touring too. I never really heard of Dee-Rail, but he’s not bad at all (Sounds a little like Common).

8. I Don’t Chase ‘Em
Featuring Snoop Dogg & Tony Mack; Produce by Devin The Dude
When Snoop & Devin on the same track, what do you expect? “I don’t chase bitches/Bitches chase me/I don’t need to chase a hoe/Nooooo, no, no”. The beat is your standard laid back affair. Since Snoop is in his subject matter safe zone, he turns in a good performance although maybe too much since it almost sounds like his song (He gets two verses while Devin only gets one).

9. Yo Mind
Featuring G Monee & Young Malice; Produced by D. Washington & D. Hatter
It’s funny, most of Devin’s music consists of bitches and weed references, but when he tries to drop knowledge, he’s good at it. Here with G Monee & Young Malice, he tries to convince you not to throw your life and future away on drugs and what not. The hook here is great and the point gets across.

10. Your Kinda Love
Featuring Joseph Edwards, Jr.; Produced by Luster Baker
Just like on “I Can’t Make It Home”, Devin calls in backup to handle the R&B duties. Since Joseph Edwards, Jr. sings for the first two minutes, I thought it was his song alone. It’s a good track, but it’s more like an R&B track that features Devin then the other way around (Huh?).

11. I Need A Song
Featuring 14K; Produced by Chuck Heat)
This is another track where Devin takes a break from the regular routine..well, kinda. Yeah, bitches and weed aren’t mentioned, but Devin only does the hook and leaves 14K to rap the verses. Still, it was strong production and is song worth checking out.

12. Stray
Produced by Rob McQueen & Devin The Dude
Devin’s right back on it at the end the album. After about a minute of heavy guitar; “I can’t stand stupid bitches”. What other way can you end this album? The song is well produced and actually kinda funny. But it’s more about the instrumentation since he doesn’t say much.

Bottom Line:
When I saw Landing Gear, I thought it was a continuation of his last album, Waitin’ To Inhale; but it was almost a 180. While the last album had varied subject matter and better known features (ex. Lil’ Wayne, Bun B, Andre 3000), this album seemed to stay mostly on three subjects and feature unknowns (Maybe because this is his first album since ending his 15 year relationship with Rap-A-Lot). The album did have Devin’s stamp on it, but I also would have like more rapping as well singing. If you’re a big Devin The Dude fan, you’re sure to love this album; to others, it may be just average. While I’m sure to keep checking for Devin, I won’t be bumping the album as much as his previous albums.