The Blueprint 3 & Before I Self Destruct DELAYED! 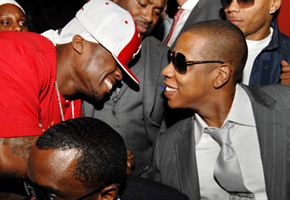 In case you haven’t heard by now, Jay-Z & 50 Cent’s albums have been delayed to early ’09. This marks the first time EVER that Jay hasn’t released an album in that “end of the year” window since Reasonable Doubt, which doesn’t really count in my book because it came out in the summer. As for 50 Cent, well, all I can say is at least we know he’s actually working on this one (just kidding!).

Seriously though, while I appreciate 50’s effort along with Jigga’s, I really can’t wait for either of these albums. Well, ok, I can wait for 50’s, but Jay killed it on “Dope Boy Fresh” and don’t even get me started on “History”! If you out there hating on that song because you don’t get the lyrics, you should quit while your ahead: Jay pretty got as deep as you can get on a song and even turned it into a possible single!

But beyond me being a Jay-Z stan (B-Easy; what’s haapnin’?), I think I need more from 50 before I can truly say I’m excited for his album. I mean it is a good deal: it’s shipping with an album and TWO movies, but I feel like at this point in 50’s career I just can’t get excited when he announces he’s dropping an album like I could when he dropped his debut. Maybe if he releases a REAL single other than bullshit like “Get Up” I’ll change my mind.

Oh, and I guess it’s safe to say that the Three Headed Monster will DEFINITELY be postponed. Eminem has already said he’s dropping in ’09. And if Detox is supposed to come last, will we have to wait another TEN YEARS before this drops? Need I remind you that both Dre AND Snoop said that Detox was done and dropping this year. Damn! I’ll give him the benefit of the doubt and say he’s waiting until both Em and Fif’s albums drop, but if it doesn’t come out next year, it never will.

50’s album should drop at the top of the year in January, with Jay dropping in February. Good luck to both of them, and remember you got this info straight from The Stoop!