I Made It A Hot Song: Jay-Z’s Best Recordings From Other Rappers’ Great Lines 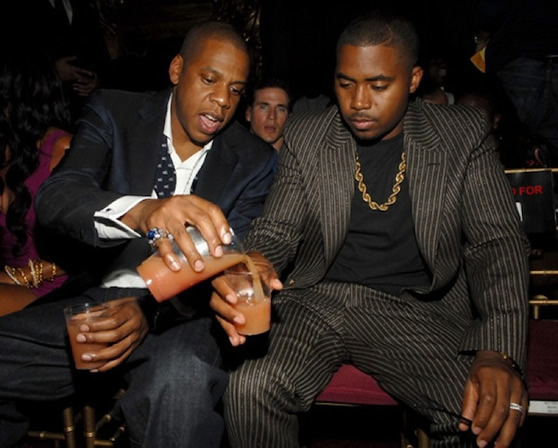 What’s current, folks? Since his inception in the Hip-Hop world, Shawn “Jay-Z” Carter has garnered critical acclaim, commercial success, and the respect and recognition from corporate executives and political leaders alike. He’s also been the subject of queries suggesting that he is part of the Bloods, Crips, and the Illuminati, just to name a few. Yet, the artist sometimes known as The Blueprint probably would not have received such attention had it not been for his immense talent in taking strong, profound, or “the-just-made-to-stick-in-your-head-all-day” styled lyrics from another rap source and shaping blazing tracks around those sound snippets.

Now, the beef between Jay and rapper Nas has been well-cooked, served, and consumed years ago (see above picture). Still, that rhyme that the Roc Nation founder issued on his classic dis’ track, “Takeover” (2001), shows how others like Mr. Jones, have merely “made [the audio of their own voice!] a hot line” where Hov’ has crafted whole, (sampled or interpolated) searing anthems. While scores of rappers may have also created entire songs built around sparse lines, similar to his ability to memorize and record raps without writing anything, it takes an artist like Jay-Z to boast about it. As he prepares to offer his memoir and full-length lyrical breakdown work, Decoded, I thought that it would be fitting to consider some of Jigga’s most “inspired” songs.

So, with no further ado, I present Jay-Z’s Best Recordings from Other Rappers’ Great Lines. Scream at me!

Skylerized States: In his return to recording singles as a solo artist, Hov’ ensures that Just Blaze provides production that would allow rap legend Flava Flav to be heard: over, and over, and over again. Also, take note to how the “‘Em” becomes “Me” in the original and updated song titles, respectively.

Skylerized States: Here, Jay culls words from one of Hip Hop’s earliest pioneers for his ode to his gigolo-esque attitude toward the ladies. Quick question though: does he also overcharge for what happened to the Crash Crew?

Skylerized States: Hovi discusses his renowned consistency, critics who compare him to his rap peers, his past career as a salesman in the streets, and among other topics, his physical mortality. Well, you know, what more can I say about this song, really?

Skylerized States: (Sighs) So here is the song that might have catalyzed one of the most epic feuds that the genre has ever witnessed. Though Mr. Carter has “addressed all drama” and the daggers have been sheathed as far as his differences with Nas go, maybe he can enlist his friend to help contend with (fill in the blank with the name of whoever has recently dissed Jay-Z)___________________.

Originally posted in the nappyafro’s Forums

You can also check out Skylerized in his own web series, Skylerized: The Web Series