The Three Most Memorable Verses Of 2008 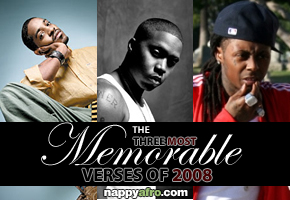 As another year closes on Hip-Hop and the many “Best of 2008” lists get ready to be released, there are many things you can rank: the best songs, the best albums, the best beats, etc. The one I always think about is the best verses. Now to be honest, there is no way to truly say what is 2008’s best verse (There is no possible way to hear them all). But the way a verse sticks out to me is its staying power, creativity, popularity, lyricism, and flow. So here are my Three Most Memorable Verses of 2008 (I only counted verses off actual songs; if I used freestyles it might have been all verses from Cypher #3 at the BET Hip-Hop Awards).

Yeah, this song was by far the most used instrumental of 2008 but what about the original? I may be accused of sometimes being a Weezy hater (10 “Simple” Reasons Why Lil’ Wayne Is NOT The Greatest Rapper Of Alive)  but even I can’t deny that this verse was one of more memorable ones this year. From the “goon to a goblin” line to trying figure out what “smokin the thinest air” exactly meant, this one had all the makings of a 2008 classic. You could have picked either three verses of “A Milli” and been good, but I chose the second.

A million here a million there
Sicilian bitch with long hair with coke in her derriere
Like smokin the thinest air, I open the Lamborghini
Hopin them crackers see me like “look at dat bastard Weezy”
Hes a beast, hes, a dog, he’s a muthfukin problem
Ok you’re a goon but what’s a goon to a goblin?
Nothin, nothing, you ain’t scarin nothin
On some faggot bullshit call em Dennis Rodman
Call me what you want bitch, call me on my Sidekick
Never answer when it’s private damn I hate a shy bitch
Don’t u hate a shy bitch? yea I ate a shy bitch
And she ain’t shy no more, she changed her name to my bitch
Yea nigga that’s my bitch so when she ask for the money when you through don’t be surprised bitch
It ain’t trickin if u got it
But u like a bitch with no ass u ain’t got shit
Muthafuka I’m ill, not sick
And I’m ok but my watch sick
Yea my drop sick
Yea my glock sick
And my knot thick
Im it

A lot of people list Nas’ Untitled album as one of 2008’s best for it’s insightful lyrics about America’s still present racial troubles. This short song shows how that even after all these years, Nas’ perceptive may still be one of his strongest assets (“I get loose like the Jena Six, they put a noose on ‘Pac, now I’m defendin Vick”). It’s a shame this track was reduced to an iTunes bonus track (And even then it was only an acapella version).

This is my openin scripture – I’ve been preparin this album
my whole life, might be uncomfortable for most you listeners
Satin’s bombardin me with propositions, but I decline
I started in the Bridge without a pot to piss in
I overcame all the opposition
My teachers told that I’d a broken mayne on a cot in prison
Cloaked in the finest drapes, not Bathing Apes
But we still filthy, Supreme Court say we still guilty
This is the Genesis, and I don’t even see a worthy arch nemesis
I get loose like the Jena Six, they put a noose on ‘Pac
now I’m defendin Vick, and free that nigger TIP
I’d take the grave or a bid
to let some dirty clan members run up in my crib
and plant cracks on the man that’s goin to church
Plants packs on the man that’s goin to work
and build cases, meanwhile they daddies and they brothers
is recruitin all my brothers and cousins to fill bases
The nerve of y’all to call Escobar racist
Nigger, nigger, nigger, nigger, nigger, nigger hatred

Now, me picking a verse from Andre 3000 may be kinda unfair since he only drops a couple a year anyway, but personally I think this is hands down this year’s finest. It had lyrics and it meant something while still sounding like it could be played at a club. This long verse (It was Big Boi’s song right?) showed that even though Andre may not be into rapping these day, he still has it.

Styles will change
They say change is dang-erous
As a King standing on the terrace
While his partners pointing up at the rifleman
Cowards shoot and never know when your life will end
Then… live like there ain’t no ‘morrow
And if one come then this the motto
Now I put message in bottle
You go to the nearest beach and open your car door
And you walk to the place where the sea meets the land
Yeah it’s easier to run the street than walk in the sand
Hey I’m talking young man
As if chalk in my hand
I will take yo’ little ass to school
It’s cool
When the kids call me Sonny, the hood calls me Stacks
The bees call me honey, Hollywood calls me back
Crack and I have a lot in common
We both come up in the 80s and we keep that bass pumpin’
Now that’s a nega-tive comparison
Embarassin’
Unfortunate that if you come up fortunate
The street considers you lame
I thought the name of the game
Was to have a better life
I guess it ain’t what a shame
I don’t slang, never slung
But I’m one with the slum
That has a name well fitting
Plenty G’s getting
No wonder why they called it the trap
So watch your tail
And I’m not kidding
The rats and mice would give advice
They say that you can paint and draw
Get out of here
Go show them that we’re more than slangin’ raw
That’s when I broke into my Big Rube impression
And I tried to enlighten but that night a learned a lesson
That the morals that you think you got go out the window
When all the other kids are fresh and they got new Nintendo
Wiis
And yo’ child is down on her knees
Praying hard up to God for a Whopper with cheese
Do you b) Hit the street hard with a flare
Or do you a) Go for school for heating and air
Dare making under seven
But make a crooked killing
Or do a bit of both until your holding on a million
Brilliant
You got one foot in and one foot out
You put yo’ left foot back in and then you shake it all about
You do the Hokey Pokey ’til you turn your life around
That’s what it’s all about
3000 out