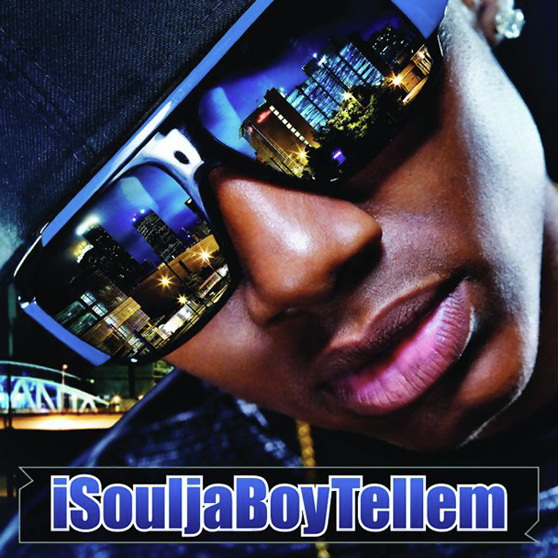 Soulja Boy Tell Em’ seems to get a lot of hate in the game: when he first showed up on the scene with a record-breaking single that was catchy enough to get him a Grammy nomination AND sold 3x Platinum; people immediately had their opinions of him. All the teenagers were doing the dance and bopping their heads to the beat, while all the older folks were complaining. Who did this kid think he was? Even Ice-T, a legend, went out of his way to tell Soulja Boy to “eat a dick”. Well, now that Soulja is in the game, the next goal is to STAY there. Let’s see if he can avoid the sophomore jinx.

I’m Bout Tha Stacks (Intro)
Produced by Drumma Boy
This is a straight up-banger to start the album off. Not bad, I wouldn’t expect anything else from Soulja Boy. First thing you’ll notice is Soulja has finally hit puberty; his voice is A LOT deeper. His lyrics still aren’t anything you’ve heard before, but he seems to have smartened up; “I got the stacks, coming straight out the Vault/Checking out my life, man it ain’t what you thought”. That one line is better than anything on his last album. Good song.

Bird Walk
Produced by Soulja Boy Tell Em’
The first single off the album. To be honest, I didn’t even know this was out until I saw the music video for it on King Jerm’s Friday Night Fro’. It’s a blatant attempt to repeat the success he had on “Crank That”, but looking at the way it’s doing, it won’t. Plus, the song just isn’t as good: “Watch me do my…BIRD WALK!!” Whatever. OK song, the beat bangs like crazy.

Turn My Swag On
Produced by Natural Disaster for U.N.I. Productions
I liked this song when it first came on; the beat is hot! But Soulja Boy is trying to sing on this?!? It wasn’t bad when I thought he was just doing it on the hook, but the first verse is just awful; we can’t all be T.I.! The hook is hot though, so I’m kind of up in the air on this song; leaning on a skip.

Gucci Bandana
Featuring Gucci Mane & Shawty Lo; Produced by Soulja Boy Tell Em
See the features on this one? CLASSIC! These three must have set out to make the absolute worst rap song they could, and they pretty much succeeded. The beat is a low key on a piano over and over, and Soulja Boy’s hook is “Gucci Bandana, Gucci, Gucci Bandana” repeated 20 times. Still, Soulja Boy has the best verse, even if he rhymes like Shawty LO. Don’t get me wrong though, this song is terrible, probably the worst I’ve heard all year. SKIP SKIP SKIP!!!

Eazy
Produced by Zaytoven
He came back on this one. Basically, Soulja Boy is boasting on how “eazy” the rap game is to him. I guess selling three million singles puts you in that mindset? This song is decent, nothing special. On a side note, I notice how most of Soulja Boy’s songs are only 3 minutes long. Thank God!

Kiss Me Thru The Phone
Featuring Sammie; Produced by Jim Jonsin
This is the second single, though it shoulda been the first. This song is just completely dominated by Sammie and he steals the show (Which isn’t necessarily a bad thing when you want to move units). Soulja Boy’s rapping is alright; it’s about how he wants to be with his girl though he can’t. It’s MUCH better than last year’s “Soulja Girl”. Decent song.

Booty Got Swag
Produced by Soulja Boy Tell Em’
This is supposed to be “Donk Part 2”. This song sucks! At least he didn’t have a song called “Booty Meat” like last time. SKIP!!

Rubberbands
Produced by Drumma Boy
This song is alright, Soulja Boy is boasting about some street shit, which we all know isn’t true. The beat is ok, but everything else falters. What’s more, this song is too damn long! SKIP!

Hey You There
Produced by Soulja Boy Tell Em’
When I saw the title, I thought he was gonna holla at some girls, but NO! Leave it to Soulja Boy to make a song about a Mall Cop yelling “Hey! You there!” at him. He makes his voice the weirdest I’ve ever heard on a rap song, and this is without a doubt one of the worst rap song of the year, no kidding. SKIP SKIP SKIP!!!

Yamaha Mama
Featuring Sean Kingston; Produced by Polow Da Don
Alright, here Soulja brings it back after three downers that messed up the whole album. Sean Kingston again steals the show, and this song was actually enjoyable to me. Well, okay, enjoyable without the SB parts.

Wit My Yums On
Produced by Soulja Boy Tell Em’
This is about Soulja Boy’s new sneaker line. SKIP!

Go Head
Featuring Juney Boondata; Produced by Soulja Boy Tell Em’
Yeah, I’m really not feeling this one either. Soulja Boy is slipping big time here; he had at least a 2 Star album before this song. SKIP!!

Shopping Spree
Featuring Gucci Mane & Yo Gotti; Produced by Mr. Hankey
This song is awful!! The beat, alright. Everything else, and Gucci Mane’s “Yahhhh!” especially is just awful. Yo Gotti’s verse is the best, but he can’t save this song at all. SKIP!

Soulja Boy Tellem
Produced by The Package Store & Mr. Collipark
Here, Soulja Boy is talking to his critics who are talking down to him and shit. This could have been Soulja Boy’s lyrical song of the album, but instead he just lazily cruises through it. I’m leaning on a skip here, but it’s a decent song…I guess.

Whoop Rico
Featuring Show Stoppas; Produced by Soulja Boy Tell Em’
This album is really getting on my nerves. This song is just filler, again! Soulja Boy is not saying anything on this track, and neither are the Show Stoppas. SKIP!

I Pray (Outro)
Produced by Drumma Boy
This song is just too long for its own good, but it comes from the heart, which I think is what counts. The topics he’s talking about are his problems with his mom, getting girls pregnant (Damn!), and finally getting signed only to become one of the most hated rappers out there. I feel for him, but maybe I’m just glad I’m done?

Bottom Line:
At first, I thought Soulja Boy was going to grow up on this one and make a decent album that I figured critics wouldn’t completely destroy. Well, it looks like we’re back on that same road again. Soulja Boy needs to grow up in the game: you 18 man, make some music that isn’t just for the teenyboppers! I will say that this album is better than his last album (not that that’s a hard thing to do: it got one star!), but at the same time, it’s just not the breakout album Soulja Boy Tell ‘Em needs to be respected in the game. Update: I was harsh on the Soulja Boy album; I decided that it really deserves a 2.5 after listening to it again.