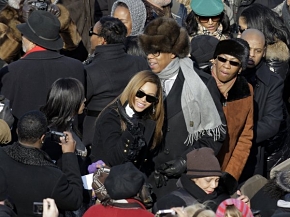 We didn’t “officially” post the video of Jay-Z performing this track when it hit earlier this week (Tone did in the forums though), but you know we had to post the song when it came out. It’s only fitting after seeing President Obama get sworn in today (“My President is Black, in fact he’s half-White…”). But check out Hov & B an the inauguration in the pic up above. Do you SEE Jay rocking the Frank Lucas hat? Tell us what you think (Not about the hat; about the song). Updated version added with Jeezy & Nasir verses from the original.