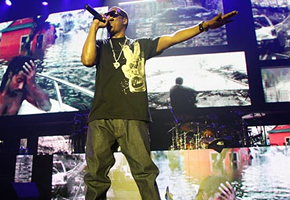 At first I wasn’t gonna post this Jay-Z song. But when someone called me and said, “I heard a new song off Blueprint 3. It’s wack!”, I had to say something. Naw, this ain’t off Jay’s upcoming album, it’s a leftover track from American Gangster. I personally like it. Some people say it reminds them of 50’s “21 Questions”, but Hovi been asking chicks if they really down since “Can I Get A…”. But speaking of American Gangster, now that time has passed what do you thing about that album? I took a 1/2 star from my original rating so you know the feeling died down a little for me. Check out the song: