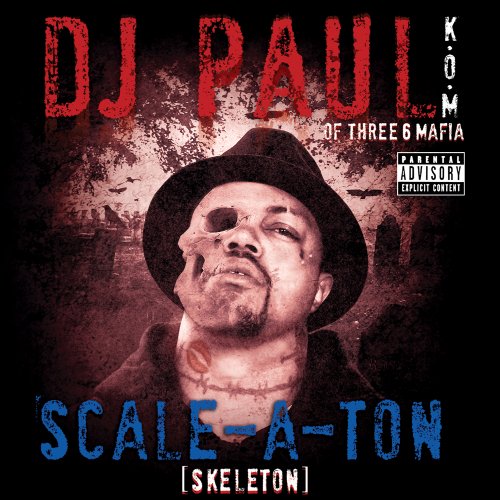 I figured someone on the site would call us on DJ Paul not being in, but no one said anything (Maybe everyone was too busy downloading Relapse). While we could just forget this album and check it under the “who gives a shit” column, it’s on the album list, so we gotta do it. DJ Paul is known for being a founding member of Three 6 Mafia, which made a buzz last year with their single “Lolli Lolli (Pop That Body)”. Now, he’s back with his second solo album in seven years. Can he stand on his own? Let’s see.

Get Right
On this track, Paul just talks about coming back, no rapping yet. Then he takes pill, marijuana, and drinks until he finally asks for a gun and kills himself. Why??

You Don’t Want It
Featuring Lord Infamous
Lord Infamous makes his first of eight featured appearances (Damn). I know that’s a lot, but think about it: they haven’t work together for minute. The beat on this is smoking. So much so the hook is excusable. The lyrics are what you’d expect, ABC, but the beat helps to forgive these errors.

Doin’ All the Doin
This song is about basically doing what you talking about instead of just saying it. It’s aiight. Once again the beat saves it. The lyrics are whatever again, but the hook and the beat are hot as hell.

Stay Wit Me
Paul here talks about people who say they with you and then turn their backs on you. The message is good, the beat is hot, and the lyrics finally rise above sub-par. Decent.

Jus’ Like Dat???
There’s only so many brain-dead lyrics and hooks you can take…SKIP

I Spoils
Paul basically talks about how he spoils himself with all the cash he’s got. It’s the same you’ve heard before, but it’s not so awful that I have to skip it.

She Wanna Get High
Featuring Lord Infamous
I feel like they got lazy on the beat right here. They have a Middle-Eastern style beat and a Middle-Eastern style girl on this one. While I dig that kind of music, the hook is terrible. I like the parts when they lay down their verses because the beat on it is fire. Alright track; could have been good with a better hook.

Walk Like A Stripper
The beat on this is smooth. Paul is talking about how a woman, no matter how she look, always look good walking like a stripper. I don’t know how true that is, but the beat smooth, and I can’t really say anything bad about this track.

Liquor And Powder
Nah, not feeling this one…SKIP

Jook
Featuring Lord Infamous
They tried to make this into a nice dance song and the beat would set the club off but it’s not a song you listen to, if that makes any sense. That’s why this is a SKIP to me.

Bumpin’
The beat on this is bumpin’ (no pun intended), but the song is mediocre. It’s like he didn’t try on this at all; these ABC lyrics are just not cutting it.

Pop A Pill
Featuring Lord Infamous
This about…well, what else? The hook is awful, the beat disappoints, and it’s just a SKIP.

Wanta Be Like You
Ok, this track I can co-sign, finally! I don’t know who is singing on the track, but they did their thing. Paul talks about how most of the people out here hating on you just want to be you. It’s a good track, you can tell where his coming from.

Gotta Eat
Featuring Lord Infamous
15 songs into this album, and all these songs are starting to sound the same: same beats, same recycled lyrics, etc. Damn! This track is average, nothing you haven’t heard before, probably on this same album as a matter of fact.

Don’t Get Up On Me
The hook is awful and the beats are slacking late in the album. SKIP!

Ima Outlaw
This track is alright. I mean, it should be expected by now, but it’s alright. The beats are good, the hook is enough to pass, the lyrics…well, who cares about the lyrics at this point? Alright track.

Internet Whore
Featuring Lord Infamous
The punch line of the song is: “She got DSL: Dick Suckin’ Lips.” We’ve heard that one numerous times before, but here he tries to connect it to the internet theme. It’s again just barely enough to pass.

I’m Drunk
Featuring Lord Infamous
This a song about getting into a bar brawl and is done over a rock style beat. I don’t know whether I’m just getting tired of the album or not, but this is a definite SKIP.

I’m Alive
This is the sequel to the first skit: Paul wakes up and basically realizes he didn’t shoot himself, he just passed out from the drugs he took and barely missed the bullet. He laughs and says he’s gonna listen to the part where he kills himself again. Once again, why??

Bottom Line:
I took this album from B-Easy because he’s done a lot of the work around here lately and I needed to take more than one album review for the month. That said, this album is just terrible: 20 songs is way too long and this album lacks diversity. It’s the same topics, drugs, money, and women. It’s funny: Paul has made so much money in his career as a rapper, and once Three 6 Mafia was a well-known and respected name in hip-hop. I might be overrating them a bit, but you get the point. Now where are we at: he releases an album that no one even knew nor cared was coming out. With his wealth, he probably could just sit back and stay caked up for the rest of his life. I hope he does that and quits while he’s ahead…oh, wait…