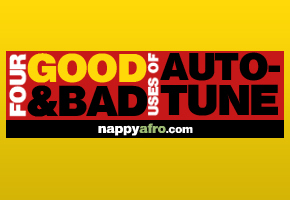 The release of Jay-Z’s song, “D.O.A (Death Of Auto-Tune)”, sparked the debate on the use (And over use) of Auto-Tune in Hip-Hop. Is it corny? Is it dead? Can it die? Even the biggest supporters of the tool can admit that its use has been excessive as of late. Personally, I think that maybe we as a culture need to move on (Or at least let T-Pain have it). Does that mean that all Auto-Tune’d songs suck? Naw, there are actually some good ones out there. Here I list some of the good ones and some of the bad ones. And no, this is not a definitive list. There are a lot more bad songs using Auto-Tune (Webstar. I’m looking at you). There are also some good ones. I didn’t even go too far back; if I had Roger Troutman and Teddy Riley may have dominated this list. Tell us what you think and what songs should be on this list.

Download: DJ Khaled feat. Kanye West & T-Pain – “Go Hard”
Producer: The Runners
I’ve been on record saying that this was one of my favorite songs of 2008. Yeezy & T-Pain re-connect and go hard (pause) with the Auto-Tune.

Download: Jamie Foxx feat. T-Pain – “Blame It”
Producer: Christopher “Deep” Henderson
Yea radio is playing the hell out of this song but you still can’t deny that Jamie (With an assist from T-Pain) crafted a catchy track. I even like the Obama parody: “Blame it on the E-e-e-e-economy!”

Download: Drake – “Sooner Or Later”
Producer: D10
Drake is everywhere these days. A large thanks for that goes to So Far Gone. I could picked a few tracks off the mixtape but I think this one shows some of the best use of Auto-Tune…lightly.

Download: T-Pain feat. Lil’ Wayne – “Can’t Believe It”
Producer: T-Pain
Teddy Penderass shows up again but this time with his own track. Jay-Z said T-Pain does Auto-Tune well; this song backs that.

Download: Gorilla Zoe – “Echo”
Producer: Drumma Boy
When I first heard this song I honestly thought it was One Republic. Until I heard Zoe’s gravel sounding Auto-Tune. Why is singing a song about lost love? What happened to being a “Hood Nigga”?

Download: Shawty Lo feat. DJ Khaled, Birdman, Rick Ross, & Jim Jones – “Foolish (remix)”
Producer: DJ Montay
This track gets a foul not because of the entire song, but for just one verse. Birdman’s verse. I guess since his “son” Weezy loves the vocoder, why not Stunna? There was no point to this.

Download: T-Pain feat. Lil’ Wayne – “Can’t Believe It”
Producer: T-Pain
You see what I did there? This song both shows the good and bad ways on the use of Auto-Tune. T-Pain’s verses = good. Lil’ Wayne’s drunken verse = terrible.