Boomin’ From The Stoop: Sleeping 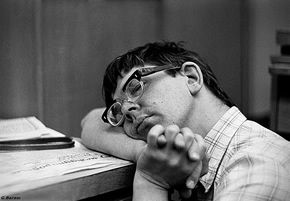 Man, is it me, or is the Hip-Hop world asleep?? When every single major release is a mixtape and the latest interesting news is Joe Budden getting punched in the eye, you KNOW the game is asleep right now. This is one of the reasons why I hate summer. No high profile Hip-Hop releases, no good video games coming out, and crappy summer movies! Sure, we had Mos Def with The Ecstatic right before summer, but other than that, what were the high profile Hip-Hop releases? Maino’s debut album and Fabolous’ Loso’s Way. Loso’s Way is another good album from Fab, but he kept us waiting on that classic album AGAIN. Maino is aiight, but two high profile Hip-Hop releases for the summer?!? Wu-Tang’s Chamber Music was hot too; have to show them some respect. Same for the Slaughterhouse album; that was bangin’!!

But answer this question for me: What album are you really waiting for this year? A few of you will say The Blueprint 3 (I’m cautiously hopeful at the time of this writing), Detox (like that’s actually coming out this year), Relapse 2, Only Built for Cuban Linx II, and Before I Self-Destruct. Three of those albums are coming out next month, on the tail end of summer. But for real, a lot of you have been sleeping out there! What about Yung LA?? What about Lupe Fiasco?? What about Wale?? Exactly.

That’s why this edition of Boomin’ From The Stoop is called SLEEPING, cause all of ya’ll ASLEEP! Lupe released the first single off his album Lasers, which was formerly called The Great American Rap Album, which was formerly called Everywhere (whew!), called “Shining Down”. I’ve been listening to it, keeping it on repeat, but I didn’t hear not one person mention it on the site! Also, shout out to Spyzyda Myzayne for looking forward to Futuristic Leland. Someone is awake! How about Wale and his Attention: Deficit debut album?? Nah, everyone is too busy listening to his mixtapes!

This is exactly what the homie KAJ was talking about in his column. I’m sick and tired of seeing all these mixtapes during the summer. I’m not gonna lie to you, mixtapes aren’t really my thing; They don’t really appeal to me. I may download a mixtape here and there (who DIDN’T download So Far Gone??), but personally, I judge artists by albums, not their mixtapes. There have been some nice mixtapes lately, I’ll admit that. But we’ve said time and time again that we at nappyafro.com NEVER want to be one of “those” websites that post up a mixtape everytime it drops. Yet with the lack of Hip-Hop albums coming out, what choice do we have?? Reviewing R&B? Hell no!! The Hip-Hop artists in the game need to get they shit together and drop real albums.

But I digress, I didn’t exactly come here to rant. I came to put ya’ll on to three songs you may have been sleeping on.

Download: “Shining Down” by Lupe Fiasco Feat. Matthew Santos
First off, this song was leaked like 3 months ago, and no one said shit. Damn! At first I was a little skeptical about this song; getting Santos and Soundtrakk back together on one song sounds like he’s trying to make “Superstar” all over again. But the results here are nice. Santos’ hook is crack, and Lupe continues with the deep lyricism: “I don’t idolize America, I’m dancin’ with the stars”. Are any of you excited for Lasers? LupE.N.D. used to be my most anticipated album of the year, but since it’s not Lupe’s last anymore it fell out of the top 5.

Download: “Taser Gun” by Yung LA
For real, I don’t even know if this album is still coming out. If it is still coming out, I’ll bet money it does worse than Big Kuntry’s album (6k first week out!). I’ll be real though, to me LA is just ok. He comes hard with infectious hooks, but his whisper flow gets on my nerves a bit. I don’t know why, but I actually kind of like this song and the whole “space-futuristic” thing that LA is using as his theme.

Download: “Chillin'” by Wale Feat. Lady Gaga
Everyone should have heard this by now. This is official single version; it’s longer than the one on his Back To The Feature mixtape, and has a completely different beat. Personally, when I first heard the song, I thought it was aiight. Wale’s wordplay is cool, but I think in Hip-Hop nowadays, we already know to dismiss the first single from every album that comes out, which is actually kind of sad. Still, the beat is hot, courtesy of Cool & Dre, and Lady Gaga did her thang. While this song is kind of disappointing, I’m still excited for Attention: Deficit.