A Collection Of Jay-Z & Nas Collabos 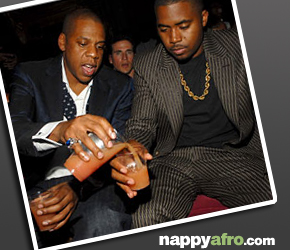 It seems like it was just yesterday when Nas and Jay-Z were involved in the what some may call the greatest Hip-Hop battle of all time. But since then times have changed; people have squashed beef on stage, deals have been sign, and it seems that Jay-Z and Nas have put all of that behind them. Earlier this month when a tracklist for Hova’s The Blueprint 3 was released, fans were excited to see yet another track, “Empire State Of Mind”, with both God’s Son and Jigga featured. Fast forward to earlier this week, and we see that on the “official” tracklist, Nas has been replaced with Alicia Keys. Now, we all love Miss Keys. But you know the real Hip-Hop heads would have preferred Kelis’ baby daddy on the track. But hey, who knows? It could still change. But until we get a final word, let’s look at past Jay-Z and Nas collaborations.

Nas feat. Jay-Z – “Black Republicans”
Album: Hip Hop Is Dead [2006]; Produced by L.E.S. & Wyldfyer
We had already been teased when it was rumored that Jay-Z would jump on the Kanye West/Nas track “We Major”, but the highly anticipated collaboration finally took place on Nas’ Def Jam debut Hip Hop Is Dead. At first listen, I was a little underwhelmed. But what had I expected? The speaker to explode and the world to cease as we know it? Once you get past the impossible expectations, the track more than lives up to the potential (And is one of my all time favorites). Both rappers got one verse each over an epic beat. Plus, that hook was hard.

*Notable Jay-Z Line: “Huddlin’ over the oven, we was like brothers then (What?)/Though you was nothin’ other than a son of my mother’s friend/We had governin’, who would of thought the love would end”

*Notable Nas Line: “Just like an acrobat ready to hurl myself though the hoops of fire/Sippin’ 80 proof, bulletproof under my attire”

Jay-Z feat. Nas – “Success”
Album: American Gangster [2007]; Produced by No I.D. & Jermaine Dupri
I guess this was the trade off for “Black Republicans”. Nas returns the favor and does a guest spot on Hov’s 2007 American Gangster. This song also has the distinction of Nas maybe taking a jab at Hov (“Worst enemies want to be my best friends”). I personally think Jay-Z went hard the whole song, but even the biggest Jigga stan will admit that Nas’ Google Earth line killed it. Jay-Z had three verses (Or one long one) and Nas went last. “Let that bitch breath!”

*Notable Jay-Z Line: “Broad daylight I off ya on switch/Ya not too bright, goodnight, long kiss,/Bye-bye, my reply, blah-blah/Blast burner then pass burner, to TyTy/Finish my breakfast, why?/I got an appetite for destruction and you’re a small fry/Now where was I”

*Notable Nas Line: “Old cribs I sold, yall drive by like monuments/Google Earth Nas, I got flats in other continents/Worst enemies want to be my best friends/Best friends want to be enemies, like that’s what’s in/But I don’t give a fuck walk inside the lion’s den”

Ludacris feat. Nas & Jay-Z – “I Do It For Hip Hop”
Album: Theater Of The Mind [2008]; Produced by Wyldfyer
Let me first state that I thought Luda had the best verse but the actually song looks better on paper. It was good to have Jay, Nas, & Ludacris on the same track, but the end results did produce a classic track (Jay’s performance was so-so and this is me saying that). The song still has a great message though.

*Notable Jay-Z Line: “The past of time when I was gettin’ it in/Just so happens I’m so illegal with the pen/They ain’t want me to do anything illegal again”

*Notable Nas Line: “That’s who you are so when the cash and cars is gone/The day after tomorrow/Don’t be asking to borrow, ski mask ang it hard/Like the way you rap in your bars”

Young Jeezy feat. Nas & Jay-Z – “My Presdent (remix)”
Album: The Recession [2008]; Produced by Tha Bizness
Okay, so this wasn’t exactly a Nas and Jay-Z collaboration since Hov jumped on the remix version. But it’s still technically a track featuring both rappers. The remix came at the height of the 2008 election and Jay-Z on the remix pushed it over the top (It already was the “hood” Obama them song). I still wished Nas would have redid his verse for the remix.

*Notable Nas Line: “For years there’s been surprise horses in this stable/Just two albums in, I’m the realest nigga on this label”

Shaquille O’Neal feat. Jay-Z, Lord Tariq, & Nas – “No Love Lost/Analyze This”
Album: You Can’t Stop The Reign [1996]; Produced by Tone & Poke
Do some of you youngsters even remember when Shaq used to rap? If not you didn’t miss much. But it was on one of Diseil’s album that we actually saw the first Jay-Z and Nas track. Well, almost. It gets confusing here. The original version of the song only had Shaq, Jay, and Lord Tariq (“Uptown baby!”), but somewhere along the line a new Nas verse was added and Shaqillie’s verse was taken off. Even through all that, I think it’s important to see what may have been the first Jay and Nas track together…13 years ago.

*Notable Jay-Z Line: “I got mine, your little bit of money couldn’t stop mine/Your block time, too hot, too many hands in your pie/Seventy thirty, the nigga you work for work for me”

*Notable Nas Line: “I flip my loot twice a week/On my most trifest streets/”You got no right to eat/By the laws of life you keep”